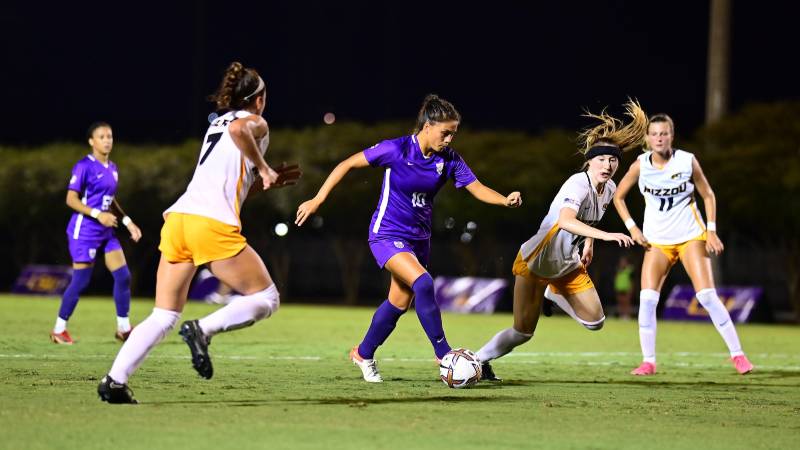 Almost halfway into the college season, the games are starting to get tighter. Conference play is in full swing, and every point will count over the coming weeks. That’s especially true for teams on the bubble — those who will need a strong conference showing in order to play themselves into the national tournament. This week is full of potentially testy conference matches, games that can easily define a season. Here’s a look at five of them.

Two winless teams in conference play meet in a tricky clash Thursday night. With Alabama and Tennessee taking off, both sides will need to pick up points. LSU appears to be in better form, winning three of its last four. But Texas A&M can be a dangerous outfit, especially Kenna Caldwell is making stops in goal. The Aggies also have history on their side, winning the last 13 meetings between these two sides. This year, though, things could turn.

NC State has struggled for consistency in ACC play, splitting its conference games 2-2 through four games. When the Wolfpack are at their best, they can give anyone a game. They showed as such against Wake Forest and Clemson, beating both in exciting counter attacking fashion. But they’ve been worryingly ineffective at times, only registering two shots on target against Duke and Virginia Tech combined. Notre Dame will be a tricky matchup. The Irish average 21 shots per game and can turn to a number of players for goals.

Stanford enjoyed a rebound week, beating both Arizona and Arizona State after going winless in its previous two contests. They were calm wins, too, as the Cardinal kept clean sheets in both. Washington hasn’t been quite as stout defensively but has been devastating at the other end. The Huskies have scored seven across their last two games, getting goals from all over the pitch. The winner will pick up three vital points in the Pac 12 race.

Wisconsin at Northwestern, 7 p.m. (BTN Plus)

The Wildcats have been one of the early season surprises in college soccer, rising into the top 10 to the tune of an 11-1-2 overall record. They survived their first major Big Ten test, snatching a point against Northwestern. Friday night will pose another one, as they host Big Ten leaders Wisconsin. The Badgers are undefeated in conference play, strolling to five straight wins. Emma Jaskaniec has been the standout so far, scoring 10 and adding four assists — good for the Big Ten lead. If she can find the net, it will be a tricky night for the Wildcats.

Pepperdine had a long time to reflect on its 4-0 loss to UCLA, getting a whole week off before returning to face San Diego. It seemed to regroup in that period, and put in a solid performance to beat the Toreros 3-0. In Portland, it will face a far more difficult foe. The Pilots are an excellent defensive side, having only allowed five goals all season. They aren’t exactly prolific — but will make things difficult for Pepperdine. There’s lots on the line, too; with both teams tied on one conference win heading into the week.