Women's weekend preview: For all the Ivies As it does so often, the Ivy League women’s soccer season comes down to the final weekend.

And while Princeton, who has dominated the league and stands undefeated heading into Saturday’s finale against Penn, has 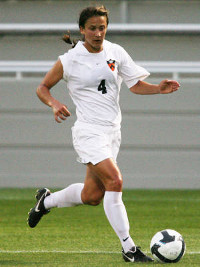 clinched a share of the league title already, there’s a chance the Tigers might not get the automatic bid into the NCAA Tournament should things fall in the right way.

Both Dartmouth and Penn (with 15 points each) are still in contention to at least tie Princeton at the top (on 18 points), and the scenario of a three-way tie exists as well, as the teams prepare for their penultimate day of the season.

While Penn and Princeton tussle, the Big Green takes on Cornell, needing a win to keep in contention for first place. Although, with a strong RPI, Dartmouth could grab an at-large bid in the tournament even if things don’t go their way on Saturday.

Naturally, it’s Princeton that controls their own destiny, needing at least a tie or win over Penn to secure the automatic bid. And with the way the Tigers are playing, it would take a substantial effort to knock them off. Forward Jen Hoy has been hard to stop, with 17 goals in 16 games so far this year.

However, if Penn manages to pull off the upset, that’s where things get a little tricky. Provided that Dartmouth wins and Penn wins, it would create a three-way tie at the top of the Ivy League, with a random drawing determining who would get the automatic spot from the conference.

If the Big Green don’t beat Cornell, and Penn does, then the Quakers would get the automatic spot. So there’s everything to play for this weekend, and the action isn’t going to be any tighter in any other corner of the country.

Heading into a final weekend of Thursday-Sunday games, teams in the WCC are hoping for one thing: BYU to slip up.

Two games on the road stand between them and an automatic bid in the tournament, with visits to Loyola (CA)(w) and Pepperdine, with both programs in need of a win to boost postseason aspirations.

A pair of teams chasing BYU will also square off, with second-place Portland trailing by three points in the standings) visiting Santa Clara on Thursday night, before returning home to host San Francisco.

BYU would officially clinch the season title with a win and a draw from their two games no matter what else might play out. And with the way they’ve played this season, it would be difficult to see anything else happening as the WCC regular season comes to a close.

A fourth-straight Pac-12 title is already clinched for Stanford, no matter what happens in their final regular season encounter on Sunday at California. However, the Cardinal will by no means have incentive to take it easy, as a top seed in the tournament could be within reach as Stanford is No. 1 in the RPI at the moment.