The West Virginia men’s soccer team can seal a unique double for the school Friday when it faces No.1 ranked North Carolina in Chapel Hill.

Head Coach Marlon LeBlanc’s side have recent experience of the task that awaits them. The Mountaineers handed Connecticut its first defeat of 2011 with a 2-0 win in Morgantown last October. Defender Eric Schoenle headed the clinching goal on 79 minutes of that game after Shadow Sebele’s first-half penalty gave WVU the lead. Both players are now in their senior year and Schoenle is confident in his team’s chances of a repeat. 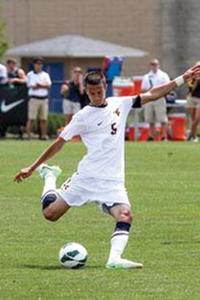 “I’m looking forward to the challenge of playing them in their home stadium,” said Schoenle Monday after West Virginia’s 1-0 win over Stetson. “You’ve got to give them respect. They’re the defending national champions, but we’re not afraid to go there and play. We’ve beaten the No.1 team before.”

The Tar Heels opened the season with a thumping 4-0 win over Gardner-Webb last Saturday, outshooting its opponent 17-1. West Virginia, ranked No.18 by Top Drawer Soccer, will present a sterner test although the Mountaineers will need to be sharper and more consistent over 90 minutes than they were on opening weekend.

“We looked like it was our first game in nine months,” said LeBlanc after last Saturday’s 2-1 win over Hartford.

Cheap turnovers in midfield left West Virginia exposed to counter-attacks when full-backs Doue and Nick Raskasky surged forward, and the coaching staff raised this issue with the players at half-time.

“We talked about rewarding those wide backs when they get forward,” LeBlanc said. “We had to exploit the numbers on the wings and when we did we were very good.”

Doue grabbed a fortuitous game-winner on 78 minutes after receiving a pass from Etuk on the left wing. The Germantown, Md. native floated an enticing cross toward the back post that carried over Tuumi’s head into the net – “just reward” for his overall performance, according to LeBlanc.

Almost 1,800 fans cheered the Mountaineers to victory in Saturday evening’s opener. Less than 200 braved the searing mid-day heat for Monday’s matinee against Stetson just 40 hours later. Many of those huddled in the sliver of shade offered by the press box overhang at the rear of Dick Dlesk Stadium’s main stand.

West Virginia’s performance was in tune with the enervated feeling among the crowd. Freshman Jamie Merriam notched his first goal at the collegiate level on 31 minutes. The young striker made a near-post run toward Pittman’s inswinging corner and flicked his header inside the far post. But WVU’s inability to put the game away left them hanging on in the closing minutes, and left an exasperated LeBlanc hurling face towels to the ground.

Stetson forward Evan Jimmo failed to control the ball near the penalty spot when he was neglected by West Virginia’s defense on 84 minutes, and Raffaele Centofanti forced WVU goalkeeper Pat Eavenson into a diving save two minutes later after a mazy dribble into the penalty box. Still, West Virginia eked out the win that took them to 2-0 for the season.

“The legs were a little heavy as they always are when you play two days later,” Schoenle said. “But I couldn’t be happier.

“It’s the first time I’ve been 2-0 in my career. Now we’ve got to look forward to our shot at the No.1 team in the country.”