Men's college team and players of the season Wake Forest midfielder Corben Bone (pictured on front) is the TopDrawerSoccer.com Player of the Season, announced Thursday as part of the 2009 TDS Men’s College Soccer Team of the Season.

The TDS All-Rookie Team was also announced, with UCLA’s Amobi Okugo headlining the first-year players by being named TDS Rookie of the Season. 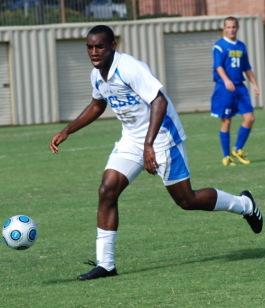 UCLA's Amobi Okugo, our Freshman of the Season. Photo courtesy of UCLA Athletics.
Bone serves as a reminder that soccer is not in essence a statistical game. His playmaking and possession-oriented work in the center of the park is the envy of nearly any team in college soccer and beyond. Bone’s vision and tenacity combined to help make him the ACC Player of the Year and an ongoing subject of interest from the professional soccer ranks.

He is joined on the TDS 1st team by stalwart defender and teammate Ike Opara, who performed both in the back line and in midfield despite missing part of the season to be at the FIFA U20 World Cup for the United States.

Notre Dame and UCLA were the other two programs with two players on the 1st team. Programs with multiple players in the overall team include #1 and undefeated Akron, Connecticut, Louisville, Maryland and Northwestern.

An athletic holding midfield, Okugo adds speed and strength to his team’s spine, serving as a vital hub in a possession and attacking-oriented style of play. He helped the Bruins to a 10-3-4 regular season record and a bye into the 2nd round of the NCAA Tournament. UCLA will host the winner of Loyola Marymount vs. Sacramento State on Sunday.