Alyssa Thompson is searching for challenges 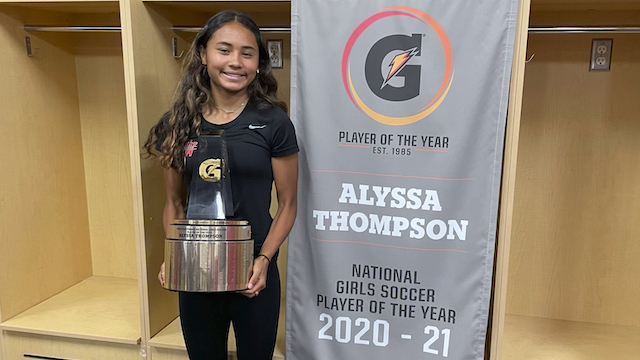 “I really wanted to get a ring.”

Alyssa Thompson vastly exceeded her goal for the high school season. The Harvard-Westlake star was awarded the 2020-2021 Gatorade National Girls Soccer Player of the Year on Wednesday, the most prestigious award in high school soccer. She is following in the footsteps of numerous national team players like Mallory Pugh (2015) and Morgan Brian (2011).

Thompson is only the second sophomore to win the award, joining fellow Californian Kennedy Wesley who won the award in 2017.

“We were in our high school locker room and everyone was there,” Alyssa told TopDrawerSoccer during a Zoom interview when asked how she learned she won the national award. “They told me it was for the local CBS news because I won the State Player of the Year for California. Then my parents and all my family brought out the national award. I was so surprised.”

Thompson was incredible for her high school this season. She scored 48 goals while leading her team to a 18-0 record. Harvard-Westlake won the 2021 CIF-SS Division 1 Championship and the CIF Division 1 Regional Championship.

“A major goal was winning CIF and then State,” Alyssa said when asked about her goals heading into the high school season. “I really wanted to get a ring.”

This was Thompson’s first full season playing high school soccer. She was going to play with the school team last year as a freshman, but she said she only appeared in three games due to youth national team camps and the COVID pandemic forcing CIF to cancel the rest of the season in March.

Alyssa gave credit to her teammates and said it was certainly nice to have her sister, Gisele, out there with her. The younger Thompson, a freshman, was a versatile weapon to complement the star power of Alyssa in the attack.

“Gisele and I always work well together. It was easier to have another player who plays similar to me on the field,” Alyssa said. “They played her at outside back when we needed defense or the other team had a speedy forward. But the last game she played the 10 [center attacking midfield], which really opened up the attack.”

With an open attack, Alyssa Thompson ran wild. She scored four goals in a 6-1 drubbing of Pacifica in the CIF Division I Regional Championship, the final high school game of the season. Fittingly, Gisele scored the other two goals in the win.

Thompson competes for both teams. She clocked 11.97 in the 100 meters during a meet for the track team earlier this year, which is the school record and among the fastest times in the state this year for that distance. She helped the Track and Field team qualify for the CIF event, but could not compete do to the overlap on the same day.

She might be the fastest at her school, but her dad, Mario, bragged to the LA Times in an article last year that he could still win in a foot race.

Mario, Alyssa’s dad, is the principal at an elementary school in Encino, California and Karen, Alyssa’s mom, is an occupational therapist. Neither played soccer growing up, so the family stumbling into the sport has been a surprise and a blessing.

“We played AYSO like a bunch of kids growing up,” Alyssa said. “My dad watched videos of Messi and Ronaldo on YouTube to see how they play. He knew we weren’t going to be very tall so soccer was a sport we could do well at, plus we were pretty fast. He would study videos on YouTube and he would train us in the backyard every day.”

Even without a background in the game, soccer started at home for the family. Mario made it fun and competitive for Alyssa and Giselle - plus their younger sister Zoe is in the competitions now too.

“It’s very competitive,” Alyssa said. “My mom keeps us sane. I have another little sister and we all play soccer. My dad is super competitive in everything. I think he helped fuel our competition. It’s pretty competitive at the Thompson household.”

That drive to win and compete against Gisele, her dad, and even her little sister Zoe, helped keep her spirits up even when soccer was shutdown in California last year.

“It helped us stay motivated to keep pushing because we didn’t know when this was going to end.”

Alyssa has dealt with an absence from the field before. When she was younger, she was forced to sit out some time after breaking her pinkie toe on her foot.

“I feel like in fifth grade I broke my pinkie toe so I didn’t have soccer for a while. Before that I was doing ok, I wasn’t doing all that well. But after that I just took off. When I’m good at something, I like to keep doing it and I fall in love with it even more.”

It seems like history might be repeating after the time away from the field in 2020. Thompson has come back with vengeance at both the club and high school level.

Alyssa’s return to the field came with her club team, Total Futbol Academy (TFA) during the fall in some of the scrimmages that the team organized. After spending the last few seasons playing with Real So Cal (now called LAFC So Cal Youth) including starring on the teams U18/19 team during the final Development Academy season in 2020, Alyssa and Giselle joined TFA for the 2020/2021 club season.

Alyssa is starting for the TFA Boys 2004 team in MLS Next, the top league for boys club soccer. As far as anyone can tell, she is the only girl playing at that age group in the league.

“They’re a lot faster and bigger,” Thompson said when asked to compare playing with the boys now opposed to a few years ago when she played for Real So Cal’s Boys Development Academy team. “I feel like I hold my own.”

She is also playing for Santa Clarita Blue Heat, a team in the UWS that includes many of the top college players. Thompson scored two goals in her season debut with the team on June 12 and was named the Player of the Game.

As the club season comes to a close, Thompson is playing with Blue Heat over the summer and then return to TFA for the next club season.

“For next club season, I think I will still be with TFA. This is the next thing to challenge myself.”

Finding a challenge is going to be tough in the near future. Only a sophomore, Thompson has already reached the pinnacle of the youth game at the club and high school level. When asked about a professional pathway, she said she has been following Olivia Moultrie’s fight to join the National Women’s Soccer League (NWSL), but it’s not something that she wants for herself.

“I think it’s great,” Alyssa said about Moultrie. “She’s been working really hard. If she can hang with them, they should let her play. [But] I want to finish college.”

Thompson is an early verbal commit to Stanford, her sister Gisele is also a verbal commit to the Cardinal. She said it’s important to her to get her degree from there. Both are strong students at Harvard-Westlake with Thompson earning four A and two B last year as a freshman, according to the LA Times. Alyssa also is a support of No Kid Hungry, a national campaign to end childhood hunger.

“I love having a family around me,” Alyssa said about her support of No Kid Hungry. “I want to foster a community that looks out for each other and feels like a family. And it helps those kids have a better day too.”

With a talent like Thompson and a clear vision for her future, the professional game is the challenge way off in the distance. She is planning to collect a few more rings at the high school and college level before she gets there.