A box-to-box midfielder for his De Anza Force side, Brandon Gillingham likes to play a simple game, not to mention winning the ball back from the opponent.

He found the ideal challenge for the next level at Stanford. 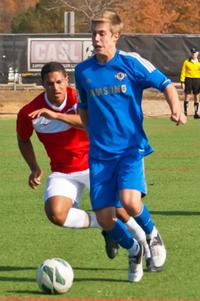 “I decided to commit to Stanford to push myself as a footballer and as a student,” Gillingham told TopDrawerSocccer.com. “I know I have to push myself in the classroom and on the field harder than I have in the past to prepare for the intense rigors of Stanford. Another big motive is my dad because he played football at Stanford. I have been going to Stanford football and soccer games ever since I was young. For as long as I can remember, Stanford has been my dream.”

Second-year head coach Jeremy Gunn has done an excellent job in a short amount of time with the team, and that did not escape Gillingham’s notice.

“The soccer program at Stanford is second to none, especially now, with Coach Gunn as head coach,” he said. “He has transformed the whole dynamic of Stanford men’s soccer, and the team will have an exciting future that I desperately want to be a part of.”

Along with the soccer opportunity, Gillingham was also excited about the education he would received at the top-level school.

“The academics at Stanford are extraordinary to say the least,” he said. “Stanford may be the finest university in the nation. The atmosphere of the school is amazing and to potentially be part of the tradition is an honor.”

Another midfielder who is good on the ball and strong in possession, Dakota Brinkman didn’t have to look far from home for a school that offered quality on and off the field.

“I was looking for a school with a strong soccer program and a strong academic program,” Brinman told TopDrawerSoccer.com. “I am looking to major in Engineering and Duke fits both those bills. I attended a Duke camp this summer and was very impressed with the coaches and got to know some of the players.  I thought Duke would be a great fit for me, and am very excited about this opportunity.”

“Duke plays in the ACC, which means we get to play against some of the best teams in the country,” he said. “I really liked the intensity of Coach Kerr and the rest of the coaching staff. They have a great group of players and they've done an excellent job of recruiting some great players for the next couple of years.”

Defender Brandon Moore (Dallas Texans) committed to Dayton for the class of 2014.

Defender Rahim Omar (Minnesota Thunder Academy) committed to Wisconsin for the class of 2014.

Forward Colin Hester (PA Classics) committed to West Virginia for the class of 2014.