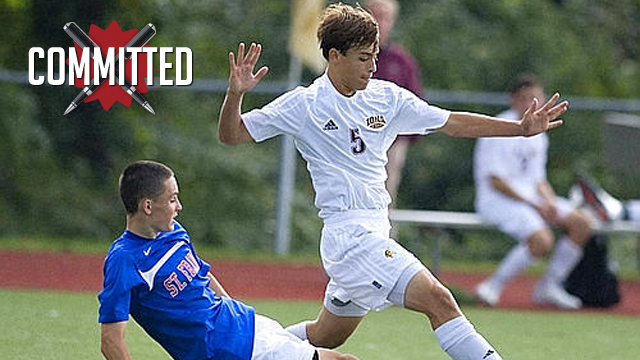 Stephen Elias, a member of various U.S. youth national teams, recently became the first member of the NC State Wolfpack 2015 recruiting class as the ACC continues to chalk up top recruits to build around for future classes.

The Wolfpack 2014 class is stacked with youth national team players, including two on the U20 Men’s National Team, Conor Donovan and Matias Fracchia. The quality of that class was part of the reason that Elias was drawn to Raleigh, North Carolina.

“The quality of the players recruited is a big reason behind my decision to join the Wolfpack,” Elias told TopDrawerSoccer.com. “I want to win. I want to compete for a national championship. The team needs depth in order to compete.

“I want to be playing with the best players and I am happy that head coach Kelly Findley and assistant coach Dave Costa were able to recruit so many talented players,” the talented attacking player continued. “I work hard and try to play at a high level and being around the best players is a motivation for me. I am hoping that the class of 2015 is just as strong as the 2014 recruits.”

It might be some time before Elias finds out if the 2015 class will stack up to the 2014s, but he is definitely a good place to start. The attacker can fill a number of roles including winger, center forward, or attacking midfielder. Figuring out where the best place to play him in college may just fall under wherever gets him on the field.

“Coach Findley expects me to play in an attacking role,” Elias said when asked if he discussed his role on the field with the NC State coaches. “I can play on either wing, as a center forward or as an attacking midfielder. I will play in any position where I am needed on the team. I would like to play where I can run at the defense because carrying the ball and putting pressure on the defense is one of my strengths.”

Elias had interest from a number of schools, but said that NC State stood out from the pack due to his high level of athletics as well as academics. He also cited the coaching staff who he believes are the key factors in making the Wolfpack a perennial competitor for national prominence.

A hard-working shot-stopper, Conner Owens was swayed to make his commitment to the Mid-American Conference program largely due to head coach Marlon LeBlanc and the rest of his coaching staff.

“I decided to go to West Virginia because I highly respect the coaches there and WVU has the academic courses that I wish to take,” Owens told TopDrawerSoccer.com.

Along with hitting it off with the coaches, the team also felt like the right fit.

“I like the soccer program because they made me feel like I was home and every player there works hard everyday to earn his spot,” he said.

Off the field, the Morgantown backdrop was also something appealed to him along with the opportunities in the classroom.

“The WVU campus itself is just beautiful,” Owens said. “It is a great environment with a lot of friendly people. I was impressed by one of the professors in the academic program that will likely be my major.”

Goalkeeper David Stekla (Texas Rush) committed to Allegheny College for the class of 2014.

Defender Jovanni Chavez (Colorado Rapids) committed to Liberty for the class of 2014.

Defender Justin Kahl (Charlotte Soccer Academy) committed to Stanford for the class of 2015.

Defender Louis Thomas (Houston Dynamo) committed to West Virginia for the class of 2014.