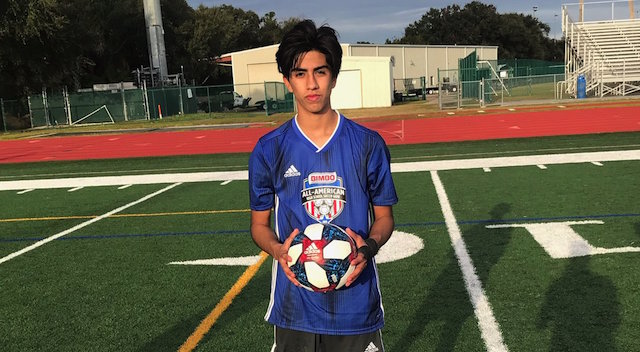 WINTER PARK, Fla. -- The High School All-American boys soccer game turned out to be a high-scoring affair, as expected, but it was capped with a bit of family fun.

The West rallied for a 4-3 victory over the East as Matthew McLaughlin and Ty Konrad netted the last two goals to pull the West out of a 3-2 deficit. McLaughlin's father, Mike, and Konrad's uncle, Jim Konrad, were two of the West coaches at this year's event.

Match video is embedded below.

F: Sammed Bawa, Taft School (Conn.), North Carolina: Bawa is a great finisher and showed that with a second-half goal. He’s really strong on the ball and created a number of dangerous situations throughout the match.

F: Akeim Clarke, Loomis Chaffee (Conn.), North Carolina: Clarke had a goal and one assist and was named the East Co-MVP. He created his goal and then showed the ability to be a set-up man, as well.

F: Ty Konrad, Naperville North (Ill.), Ohio State: He has game-changing pace. His speed is difficult for defenders to handle, and he used that speed to create his game-winning goal.

M: Yaya Bakayoko, Martin Luther King (N.Y.), North Carolina: Poised, smart, creative — are all terms that come to mind when Bakayoko had the ball at his feet. He served up a perfect pass for a late-game assist, which showed his ability to punish defenses.

M: Jameson Charles, Washburn (Minn.), undecided: He was one of the smallest players on the field, but also one of the hardest workers. He won every 50-50 challenge. Charles, who was named the West Co-MVP, has been called into an upcoming Haitian Youth National Team training session.

M: Jony Munoz, Olathe West (Kan.), Liberty: Multiple coaches referred to Munoz as a special player. In a game full of stars, Munoz stood out and was the best player on the field for most of the match. His touch and pace were top end. He knew when to speed up play and when to slow it down. He scored a goal and was named the West Co-MVP.

M: Myles Sophanavong, Peoria Notre Dame (Ill.), undecided: Coaches pegged him as one of the top four players for the West. Very versatile as he played midfielder and as a left back. He was very good with the ball and very involved in the attack when needed.

M: Nathan Ward, Greensburg Central Catholic (Pa.), Indiana: Ward demonstrated a great work rate and it paid off with a goal. Coaches were impressed by how he constantly put defenses under pressure.

D: Caden Buckley, Bishop Gorman (Nev.), Santa Clara: The West only had two true defenders on the roster, so Buckley stepped into the back and was a force. He was one of the few West defenders who was able to hang with the more physical East forwards. He was calm when he got the ball, even as the East pressed.

D: Taylor Calheira, Concordia Prep (Md.), UMBC: Calheira held the East together in the back, which was no easy feat in an offensive-minded group that pushed a lot of players forward. As one coach put it, "He sacrificed going forward to make sure we had a defense."

GK: Khamari Hadaway, Northfield Mount Hermon (Mass.), Princeton: A true team leader. He is a great communicator on the field. He played the first half and was required to make a number of saves to keep the score close. He was selected as the team’s Co-MVP.