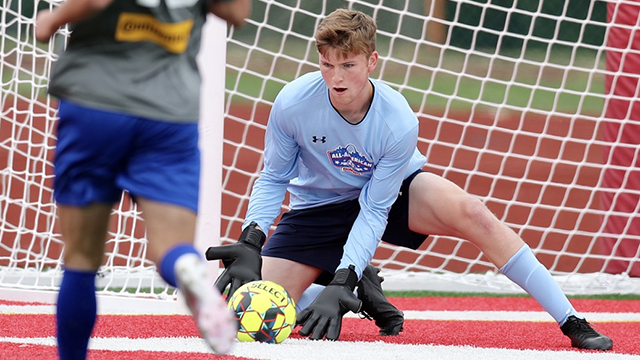 The East MVP and both West MVPs were defenders in a match that ended 1-1.

The Best XI list and other standouts were compiled from the coaches from both squads.

As an interesting side note, East coach Stan Lembryk of Clifton (N.J.) was a college roommate with current Loyola (MD) coach Steve Nichols whose son, Richard Nichols, was one of the featured players on the East squad this year.

GK: Luke Snyder, Cumberland Valley (Pa.), High Point: In a match full of quality keepers, Snyder got the nod because of two big saves he delivered to keep the West in the match. He was tough to score on and was impressive both in the match and practice.

D: Josh Adam, Brighton (Mich.), Michigan State: Co-MVP for the West. … Managed the backline well and was solid throughout the match. When he came off the field, the game changed in the East’s favor.

D: Sean Green, Chaminade (Mo.), Creighton: Playing at his home school, but not field (the soccer team plays on a different pitch), Green, a West Co-MVP, stood out from other defenders with his awareness and ability to move into the attack. He served up the assist on the West goal.

D: Josh Jones, North Penn (Pa.), Louisville: Jones was selected as the East MVP. He was great in the air and anchored the backline. He made good, clean decisions out of the back.

D: Mohammed Seidu, South Kent School (Conn.), undecided: He was a physical presence and a ball winner. He was considered for the team’s MVP honors.

M: Seth Anderson, Quincy Notre Dame (Ill.), Saint Louis: Very strong on the ball and easily one of the top five players on the West squad.

M: Marcus Garcia, St. Pius X (N.M.), Maryland: Scored the West goal. … A team leader who was coachable and respectful. His presence brought the level of play up for his teammates.

M: Amer Lukovic, Clifton (N.J.), Rutgers: Strong on both sides of the ball. Defensively he won battles and offensively was sprayed balls into the attack.

F: Hunter Sekelsky, Louisville Collegiate (Ky.), Louisville: Incredible pace and created a number of chances. Sekelsky will be attending Louisville, but not playing for the Cardinals as he is going to continue playing for Louisville City U23s.

F: Francesco Pagano, Fayetteville-Manlius (N.Y.), Syracuse: Big, tall, strong attacking player, he scored the East’s goal. He was able to make something out of nothing on his game-scoring play.

F: Andrew Serafino, Suffield Academy (Conn.), Boston College: He was a spark plug and changed the game with his presence on the field. Adds a big personality to go with his attacking play.