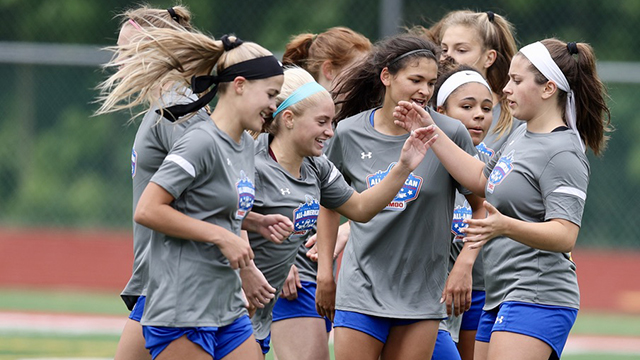 SAINT LOUIS, Mo. — Simply put, the West had no answers for the New Jersey attack as the East girls rolled to a 4-1 victory in the High School All-American girls match.

All four goals and both assists for the East came from New Jersey players.

The East jumped out to a 4-0 lead en route to the victory.

GK: Amanda Poorbaugh, Olentangy Orange (Ohio), Penn State: She was put under a lot of pressure from the East, but kept the team in the match with a couple big saves.

D: Avani Brandt, Syosset (N.Y.), Stanford: A solid center back who was involved in the attack. She was very strong with her distributions.

D: Gia Girman, Nottingham (N.J.), Rutgers: Even with 100 career high school goals, she played outside back in the all-star match. Still, her attacking ability came to the forefront when she scored the first goal of the match.

D: Emily Mason, Hunterdon Central (N.J.), Rutgers: Gritty performer who cleaned up a lot in the back. Her play made it difficult for the West to even get chances.

D: Quincy McMahon, Guerin Catholic (Ind.), UCLA: Coaches loved her energy and ability to get into the attack. McMahon was named the West MVP.

M: Kylie Daigle, Pennington School (N.J.), Rutgers: With a goal and two assists, Daigle was a candidate for MVP. She was a playr the West had to always worry about.

M: Peyton Felton, Strongsville (Ohio), Memphis: She was a complete player who was able to get things done both offensively and defensively.

M: Claire Manning, Montclair (N.J.): Georgetown: Perhaps the most composed player on the field, Manning moved to a defensive role to help the East nail down a win. She was clean on the ball.

F: Khyah Harper, Centennial (Minn.), Minnesota: Proved to be the West’s most dangerous player. She created a couple scoring chances.

F: Riley Tiernan, Eastern (N.J.), Rutgers: Tiernan scored two goals and was named East MVP. She was always a threat and was able to run past or muscle through defenders.