The TeamSnap Fall All-America teams are compiled by TopDrawerSoccer with consultation with coaches and media members from around the country. Players from the 34 fall-playing soccer states are eligible for consideration.

The Louisville commit was the engine behind Collegiate's high-powered offense that led to a 24-2-1 season. Abdikadir finished the year with 40 goals and 12 assists. He was named the state's Offensive Player of the Year. He is the No. 39 recruit in the 2018 IMG Academy 150.

The Xavier signee closed out a stellar high school career with a goal and one assist in a 2-1 state final win that completed a 21-0-2 season and lifted St. Ignatius to the SIMA FAB 50 Fall national title. Milhoan had 31 goals and nine assists. He is a two-time Ohio Scholastic Soccer Coaches Association Division I Player of the Year.

One of the top young talents playing in the U.S. is Shaffelburg, a Canadian citizen. He scored 27 goals and added 11 assists while helping Berkshire School to the Prep A championship and a No. 2 prep Top 10 final ranking. This past spring and summer he trained with MLS entry Toronto FC and appeared in matches with Bethlehem Steel of the USL (while with the Phladelphia Union Academy) and Toronto FC III.

The Indiana signee was the most feared striker in New Jersey and carried Seton Hall Prep to a state runner-up finish to fellow state power Christian Brothers Academy. Toye, a member of the U.S. Under-19 Men's National Team, had 21 goals -- nine game-winners -- and 12 assists. He was selected the Star-Ledger New Jersey State Player of the Year.

The Georgetown signee carried Byram Hills to an 11-1-1 regular-season run after missing the first three games to injury, and helped the team reach the Class A semifinals, losing to the eventuial state champion in penalty kicks. He finished with 17 goals and 10 assists. He skipped high school play as a freshman and sophomore to play in the Development Academy, but joined the high school team after seeing his schoolmates win back-to-back section and regional titles. Beer was the Journal News/LoHud Westchester/Putnam Player of the Year and a New York state coaches first-team all-state selection.

Diop is one of the nation's most sought-after uncommitted recruits and holds offers from a couple ACC powers, among others. The native of Senegal netted a hat trick in a 3-1 state final win over St. Benedict's Prep, ending the Gray Bees national record run of 27 straight state titles and allowing Pennington School to finish with an undefeated record at 16-0-3. Diop was named the Trenton Times Player of the Year and ended the season with 32 goals. Pennington School finished No. 4 in the SIMA FAB 50 for fall teams.

The Notre Dame signee was named MVP at the High School All-American Game following a two-goal performance. McFadden helped West Chester Henderson to a 23-2-1 record. He was a three-time Ches-Mont League first-team honoree, helping the team to three straight league titles. McFadden finished his career with 37 goals and 37 assists.

The Michigan signee was named the Gatorade National Player of the Year following a senior season with 19 goals and nine assists. He factored in all but two goals scored by Hotchkiss School last season. He competed in the High School All-American Game in December, where he dazzled onlookers with his ball skills.

The Wisconsin signee was the Greater Metro Conference and Wisconsin Soccer Coaches Association Player of the Year. Leas guided Marquette to a third straight state title in a season where the Hilltoppers also handed the nation's top-ranked prep school its only loss.

The Michigan signee was tabbed by Chicagolandsoccer.com as perhaps the fastest player in the state with the ball. His defense helped Barrington to a 23-win season and state runner-up finish. Pirie scored four goals and assisted on 13 others. He was named to every All-State team in Illinois.

The Harvard-bound keeper was named the All-Delco Player of the Year after posting 12 shutouts. He allowed only two goals in league play during the 2016 season. He also played in the field at times to spark the team's offense.

To say it was a dream season for Nauset and McCully would be an understatement. Nauset outscored its opponents 108-1 en route to a 23-0 state title-winning season, and the only goal allowed was in the state final. Nauset's state championship was the first for the program since 1979 when McCully played on the team and set a school record with 39 goals. His son, James McCully, scored 38 goals during the team's 2016 state title campaign to earn All-Northest Region honors. John McCully has topped 250 career wins at his alma mater. 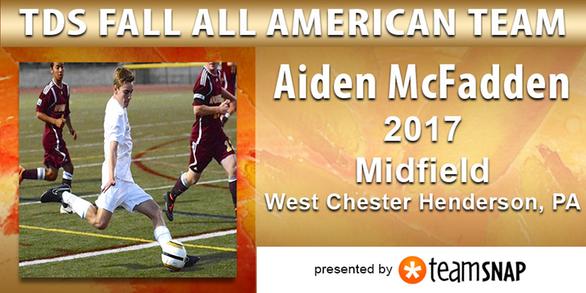