The TeamSnap Winter All-America teams are compiled by TopDrawerSoccer with consultation with coaches and media members from around the country. Players from the seven fall-playing soccer states are eligible for consideration.

The UC Santa Barbara commit netted 36 goals and added eight assists for Brophy Prep, which reached the state semifinals. Clemmensen is one of the nation's top Class of 2018 prospects.

The Pittsburgh signee led Montverde Academy in goals and was second in assists. Edward was named MVP of the final Montverde Academy Soccer Tournament after scoring an event-high five goals in the three-day tournament. He is the No. 41-ranked player in the 2017 IMG Academy 150.

A native of Sierra Leone, Michael, a UC Santa Barbara signee, has dominated both the high school and club scenes. He was named the CIF Southern Section Division 6 Player of the Year after tallying 22 goals and 14 assists as Dunn School posted a 13-1-1 record. He guided Santa Barbara SC to a US Youth Soccer Under-18 National Championship in 2016. He finished his high school career with 74 goals and 43 assists.

The New Mexico signee was named District 9-6A MVP deleivered 21 goals and 15 assists. He was selected as the Dallas Morning News Offensive Player of the Year.

Almeida was third on the team in goals and assists and projects as Montverde Academy's top prospect for next season. While many of the Montverde Academy seniors gobbled up postseason honors, Almeida was one of the most dominating players on the squad, according to coach Mike Potempa.

The Bosoton College(m) signee guided Marin Academy to a second North Coast Section title, and in the process earned MVP honors from the team and Player of the Year accolades from the Marin Independent Journal. Buehler is a holding midfielder, and he scored seven goals for Marin Academy.

The Ohio State signee scored 10 goals and added eight assists as the No. 2 scoring threat for Montverde Academy. Jackson was selected to the Montverde Academy Soccer Tournament all-tournament team after helping the squad close out a 20-0-1 season.

The SMU commit was a Dallas Morning News All-Metro first-team selection. He had 17 goals and seven assists as Coppell went 19-3-2.

The South Carolina signee was the District 26-6A offensive MVP after producing 17 goals and 11 assists. He helped Reagan to a 15-4-4 season.

Haupt was named the CIF San Diego Section Player of the Year, an honor rarely bestowed upon a defender. The UC Davis signee led St. Augustine to a section title and a regional appearance.

The Dayton signee was the District 6-6A co-MVP and a Dallas Morning News All-Metro first-team selection. Despite his role on defense, Marchino netted nine goals for nationally ranked Boyd.

With two of the winter season's top national goalkeeper prospects, it's easy to understand why Montverde seldom allows goals. Vosvick, a Loyola (MD) signee, was in goal for Montverde for most of the team's most recent undefeated season, a 20-0-1 run. Vosvick was one of three NCAA Division I-bound keepers that Montverde cycled through its matches, and his two-year run was quite amazing. Montverde has gone 42-0-2 and allowed only 14 goals while Vosvick and TeamSnap Second-Team All-America keeper Connor Jones shared the workload.

The former professional player-turned-high school coach, DeLong cemented his legacy after guiding Dallas Jesuit to a 22-3-1 season and a Class 6A state title. In 37 years at Jesuit, DeLong is 590-71-31. Before joining the UIL, Jesuit dominated TAPPS, winning 17 state titles between 1978 and 1999. In 2010, Jesuit claimed its first UIL state title with the nation's top-ranked team that year, loaded with Development Academy players. Even after the DA had stripped the Dallas area of many of its top players, Jesuit continues to roll along as a state power. 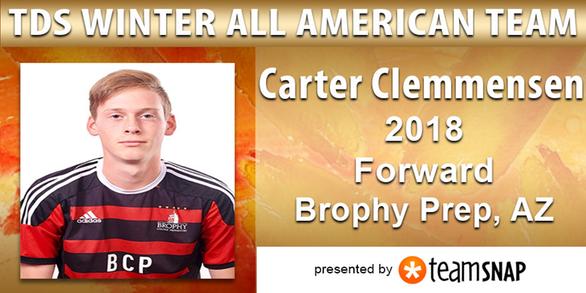