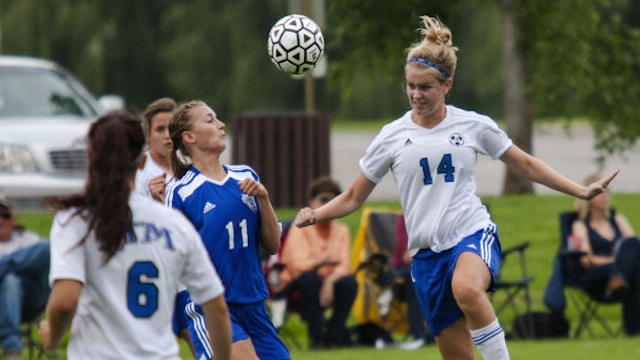 For the first time, high school soccer officially planted its flag in the ground in South Dakota this year.

After years of being primarily an unsanctioned club sport on the high school level, soccer migrated from under the umbrella of club organization South Dakota Soccer to the existing South Dakota High School Activities Association in the offseason. The SDHSAA folded soccer into the grouping of sports it already sponsored, making soccer an officially sanctioned sport on the high school level for the first time in South Dakota. For fans, the only marked difference is a fee at the gate to subsidize future improvements.

To hear South Dakota coaches tell it, the new system eliminates confusing entanglements created by the addition of a club system that muddled state champions and added another layer of competition that diluted the singular importance of any one trophy ceremony. Now, only Class AA and Class A will award trophies on the boys and girls levels. The top eight schools in each division make the postseason, with both the quarterfinal and semifinal rounds hosted by the highest seed.

The fall season got underway in late August for 17 Class AA programs and nine at the Class A level (meaning all but one Class A team will make the state playoffs). The thickest concentration of programs is in the Sioux Falls area, where one of the matchups of the season is nearly here. When Brookings High School and Harrisburg High School square off next week, bragging rights will extend to the sideline.

In 2008, South Dakota State reached the second round of the NCAA tournament with the help of striker Erin Kasmarik and Kayla Braffet, a super sub who played in every game. Kasmarik led the team with 10 goals and four assists that year, and Braffet scored three and assisted on two more. Next week, they’ll face each other on competing sidelines as head coaches, Braffet for Harrisburg and Kasmarik for Brookings.

One of the challenges coaches face with a brand new sanctioning association is unfamiliarity. Schedules shifted to such a degree that some teams hardly recognize their opponents. While teams settle into unfamiliar surroundings, growing pains are inevitable, but most coaches seem to agree these are of the positive variety.

“I’m excited to start off this season,” Hot Springs High School coach Willy Collignon told the Rapid City Journal in August. “We’ll be playing teams we have never faced before, which will present some interesting challenges for this Hot Springs squad. But we could field a full field of 11 returning letterwinners, so I am expecting them to play well together.”

The start of the high school season is typically a time for settling in, but a handful of players wasted no time digging into the serious business of goal-scoring by racking up five goals apiece in recent contests.

The first? Guillerme DeNovaes, whose comeback from a brutal ACL tear this season is already off to a flying start. DeNovaes was gearing up for his junior season at New Jersey program Long Branch when, in the final scrimmage of the 2013 preseason, a torn ACL threw him out for the season. After a long period of rehab, DeNovaes worked back to start Long Branch’s season opener on Friday against Rumson-Fair Haven. He keyed a comeback from 1-0 down with all five goals in an eventual 5-1 victory. He scored all five in a 46-minute span, and his fourth was a beautifully-taken chipped effort after he cleaved through a pair of defenders. Consider it making up for lost time.

The other five-goal deluge came from Bridgette Andrzejewski, a 2016 North Carolina commit and the No. 12 player in the IMG Academy Top 150. The Maryland native plays her club ball for Match Fit, but she represents vaunted McDonogh School on the high school level. McDonogh, which is known as a pro factory on the high school level and recently produced 2012 Maryland Gatorade Player of the Year Ashley Spivey, recently hosted the McDonogh Invitational, and the Eagles took apart Notre Dame (N.J.) 7-0 behind Andrzejewski’s five tallies.

Notre Dame was ranked No. 19 in the state of New Jersey in the Newark Star-Ledger’s preseason poll, but Andrzejewski ripped its back line to ribbons. She was recently involved in a U17 YNT camp in Portland, Oregon and batted away interest from UCLA and Virginia to commit to 21-time national champion North Carolina shortly thereafter.