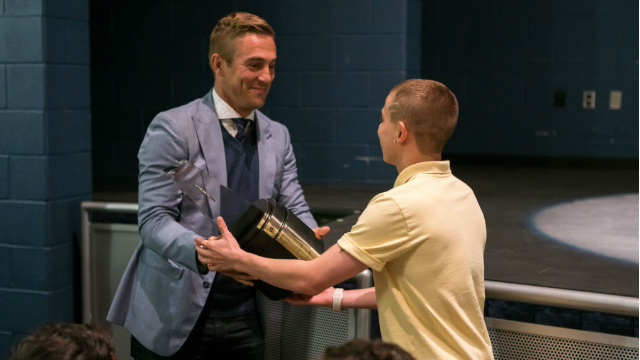 ARLINGTON, Va. — Every year when the Virginia high school soccer season drew near, the same question swirled around Lucas Mendes.

Would he play for [Washington-Lee va-m]?

During the past three years, the D.C. United youth academy midfielder elected to sit out the high school season and remain focused on club soccer. This past winter, ahead of his senior season, Mendes opted in. Little did he know, the ramifications would be felt on a national level.

The Virginia native was named the Gatorade High School National Player of the Year on Tuesday afternoon, surprised by ESPN analyst and former MLS standout Taylor Twellman with the award.

It wasn’t exactly what Mendes pictured when he decided to play high school soccer in his senior year.

“I just came in wanting to try and hang a banner in the school, win a state championship,” he told reporters after earning the award. “Nothing at this level, this is beyond [anything] I can imagine.”

During the spring season with [Washington-Lee va-m], the No. 2 ranked team in the Spring SIMA FAB 50, Mendes has 13 goals and seven assists, helping the team to an 11-0-2 record. It marked the third straight year the Generals finished the regular season unbeaten.

Prior to playing for his high school team, Mendes scored eight goals for United’s U18 team in 13 games in the fall of 2015, and was called into U.S. U20 Men’s National Team camp this past January.

He cited his relationship with [Washington-Lee va-m] Head Coach Jimmy Carrasquillo as one of many factors behind his decision to sit out the second half of the academy season and suit up for the high school season.

After he made the decision, Mendes tried out for, and made the team. His inclusion was smooth from day one.

“I think a lot of the guys immediately respected him, but at the same time he wasn’t cocky about it,” Carrasquillo said. “He wanted to come in, fit into the team and it’s gone really well."

There’s been an adjustment period for Mendes. Standing at 5-foot-5, the physical nature of high school soccer forced him to adapt. He’s also dealt with being man-marked by opposing defenses, something that he never faced in the Development Academy.

Quick on and off the ball, Mendes possesses both the speed of thought and fleetness of foot in order to avoid the physicality. Part of Washington-Lee’s success thus far has centered on Mendes’ partnership with star forward Maycol Nunez. The pair last played together in middle school, and has combined for 29 goals through 13 games. Mendes’ inclusion on the team helped the former NSCAA High School All American Nunoz raise his game, while also taking pressure off of him.

Mendes’ recognition also rekindles the never-ending high school vs. club soccer debate, and which path is the best for a teenage player's development.

“The soccer community will look at it, and that’s all they’re going to talk about,” Twellman said. “Here is a D.C. United Academy kid that left academy to play high school. This is an on-going discussion, I’m actually asked this more than any other question over the last 18 months: what’s the right way, what’s the wrong way. And the answer is it’s neither…the coolest part of this story is it was Lucas’ decision. Not his parents, not his coaches. I have a lot of respect for that.”

For Mendes, the reasons were numerous, from the aforementioned championship aspirations to focusing on giving back to his community in Arlington. The crafty midfielder already had pledged and signed to join Virginia this fall, so he seized the final chance he had to suit up for his high school squad.

With the goal of a championship in mind, Mendes is coming alive at just the right time, scoring five goals in the final two regular season games. Postseason play nears, and the individual honors will quickly take a backseat to the quest for the ultimate team goal.

“I think I’m starting to catch proper form towards the time I need to be catching form,” he said. “I think the team’s coming together, so we’re creating more opportunities, getting shots on goal.”