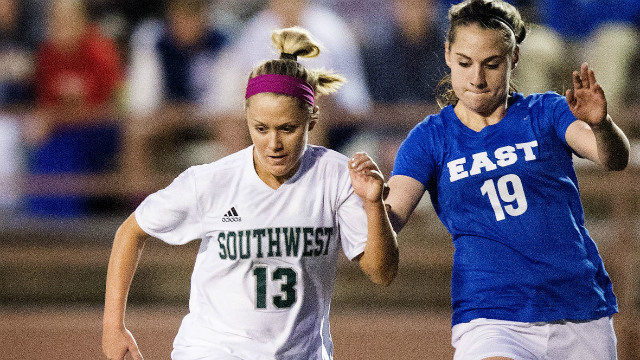 * Riane Coman, Academic Magnet (S.C.), So.: Coman has emerged as an offensive force for perennial small-school state title challenger Academic Magnet. The sophomore has netted 33 goals for the 14-5 squad. She is being courted by several ACC programs, but remains uncomitted.

* Hannah Davis, Lincoln Southwest (Neb.), Sr.: Davis has a state-best 34 goals this season. The Kansas State signee was an all-state selection last year and is certainly playing her way into state player of the year consideration this season.

* Kassi Ginther, Summit Christian Academy (Mo.), Sr.: What happens when a strong offensive-minded club player and NCAA Division I recruit is placed in an envirnonment with lower level talent? A season like Ginther's emerges. The FC Kansas club player and Iowa State signee has scored 78 goals as Summit Christian has rolled up a 16-1 record. The team has at least five matches remaining, which means at her current scoring clip of an average of 4.5 goals, Ginther has a chance to hit the 100-goal mark ... this season!

* Kayla Hamric, Battlefield (Va.), Sr.: Hamric has been a fixture on the Battlefield run of state titles, and last week she scored twice in the team's only outing -- another win that keeps the team No. 2 in the latest SIMA FAB 50.