GATLINBURG, Tenn. — It's one for the history books, yet Thursday’s clash between Coppell (Texas) and McCallie School (Tenn.) will be about self discovery for two programs with high expectations in vastly different places in their respective seasons.

This meeting, a first ever between SIMA FAB 50-ranked teams from different high school seasons, kicks off the Smoky Mountain Cup on Thursday night at 7 p.m. EST. The game will be streamed live by DiamondClearMedia.com.

Overall, four SIMA FAB 50-ranked teams and one regionally ranked squad will be participating in this week's Smoky Mountain Cup, but the headline clearly rests with this Coppell-McCallie clash in the Clingman’s Dome Division. On Sunday, SIMA FAB 50 Spring No. 19 Christian Brothers (Memphis, Tenn.) takes on Spring No. 20 J.L. Mann (Greenville, S.C.) in the Mount Guyout Division. 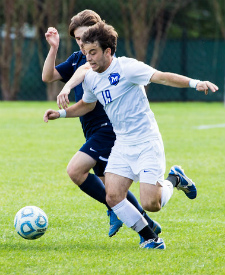 "We're looking forward to this, to get three quality games in before we start districts," Coppell coach Chad Rakestraw said. "To them (the players), they are thinking of it as just another game, but it's a bigger deal to me. We understand the uniqueness of it, and what it took to make this game happen."

"We want to make McCallie the best place to play soccer, and for us getting to play a great team — one of the best from Texas, Florida, California — sign us up," McCallie coach Chris Cushenberry said. "We want to test ourselves against an organized, quality team like Coppell."

Both coaches have never met, nor have they spoke to each other. However, both have spent plenty of time watching video and reading about the players to know what lies ahead Thursday.

Taylor and Priest have become a scoring machine for Coppell. Priest also is coming off a strong club showing in Las Vegas, which now means he’s being courted by several Top 25-caliber programs. Sais has been a surprise to Coppell, joining the team a couple weeks into the system. Originally from New York, his family moved to Texas to participate in Academy soccer. But after a seven-week trial in Holland, he has opted out of Academy ball and his playing for Coppell. Haas was a key figure in Coppell’s midfield early in the season, but recently transitioned to defender to help sure up the back line.

From a national high school perspective, there’s no chance for fall and winter teams to overlap as even the latest fall-playing teams are in playoffs when the first winter teams start. Thanks to Texas’ late winter start, it does overlap with the early spring states — but this is the first time a tournament has been positioned to allow for this sort of meeting. This week is the final week for district play in Texas and the first full week of action for Tennessee spring teams. Coppell adjusted its schedule, clearing off the final week to compete at the Smoky Mountain Cup.

This year, the Smoky Mountain Cup has been divided into two events, one in March and the other in April in order to accommodate more teams and work with varying spring break and Easter breaks.