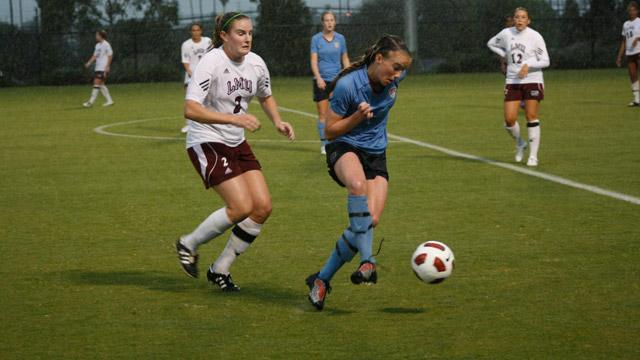 Carson, California – In a match played in heavy rainfall Wednesday night at the Home Depot Center, the U.S. U17 Women’s National Team won a lopsided victory against Loyola Marymount University by a score of 7-0.

“I think Toni played well for being her first time in a national team camp. She played very thoughtful soccer,” said Head Coach Jill Ellis. “What I like about this group is that they come to play and push the ball.”

It only took 15 minutes for the first goal of the night to arrive, when Green’s 20-yard shot just snuck underneath the crossbar for a 1-0 lead. 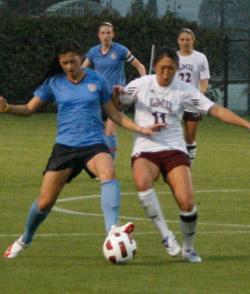 The U17 WNT (left) beat LMU on Wednesday.
Payne scored her first goal as a national team member in the 50th minute when she received a pass on the right side of the goal, and slipped the ball between LMU’s goalkeeper and the left post. Four minutes later, Beadling SC striker Frannie Crouse, did something similar on the left side. Driving in with the ball, dribbling around the LMU defenders, and tucking the ball calmly into the back of the net for the 3-0 lead.

Even though the Americans were more opportunistic in their looks at goal, LMU had several chances. U.S. goalkeepers, Jane Campbell and first-timer Morgan Stearns, were secure with shots and crosses, able to overcome the added challenges that a wet and slippery ball can present.

“Jane has been here before and I think she’s superb. She’s clean, has a good build and is confident,” Ellis said. “Morgan is here for her first time and has been impressive. She has a good frame to her, and her kicking and decision-making was good.”

Green got on the board again, and increased the advantage to 4-0 in the 71st minute, beating the keeper from the right side. Four minutes later, Morgan Stanton of Colorado Rush got at the end of a corner kick and notched a goal to make it 5-0.

Payne added another in the 78th minute and and Green, a North Carolina recruit, tallied her hattrick in the 83rd minute for the final 7-0 scoreline.

Another player who impressed but didn’t reflect in the scoring summary was Joanna Boyles of CASL. Our #1-ranked 2013 player was moving all over the park in midfield, both drifting laterally and tracking the ball back to the defensive third.

“We tried to keep her in a supportive role and a little higher to keep space available,” Ellis said. “Often we have our midfield in a rigid triangle so we tried to let them move freely. Joanna covered a lot of ground and played very well.”

If there were anything to improve on from today’s performance, it would be the slow start the U.S. had.

“I thought the first 10-15 minutes we didn’t have a good rhythm and got bumped around a little bit,” Ellis said. “We took a while to settle in to try to keep the ball. We need to improve on how we start the game.”

The U.S. U17 WNT will end training camp Saturday with a game against Cal State Fullerton.