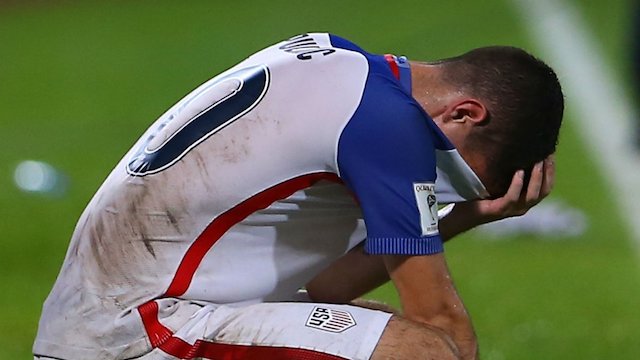 I, like almost all others, don’t have a frame of reference for the U.S. Men’s National Team missing the World Cup. It’s been a four-year summer tradition for as long as I have been alive. This summer, that tradition ends.

The U.S. Men’s National Team will not be playing in the 2018 World Cup. They will be sitting at home watching the games from Russia like the rest of us. There are plenty of factors that went into the failed World Cup qualifying bid, the first time USA tasted failure at this level since 1986, but in the grand picture none of them really mattered. The coaching, player selection, venue choices, anything else that fans spent all of last night cursing and debating did not matter.

The simple matter is that the U.S. Men’s National Team is handicapped by a cultural challenge that was established in 1996 and held back player development in this country for the past 21 years without contest because every supporter of the national team was content with mediocrity in World Cup appearances that meant success but never resulted in an actual chance at being a powerhouse in the world’s game.

The safety net of a perceived successful four-year cycle with a World Cup appearance and an early exit are finally gone. Where does U.S. Soccer go from here?

The most likely path is the program goes through a change with a new coaching staff, and perhaps a new Technical Director. New faces to profess their plan to adjust the future of the program that is currently in its lowest place in the history of the sport in this country. There will be promises of a revitalization to the player selection and a new path for player development for the youth national teams.

It’s all a facade. It’s a fresh coat of paint over a crumbling house. It’s a repetition of 2010 all over again. Jurgen Klinsmann berated the U.S. Soccer system, criticized the players, and questioned the status quo during the 2010 World Cup. Years later, he found himself in charge of the team he was belittling on an ESPN broadcast.

Klinsmann tried to revamp anything he could within U.S. Soccer, as an outspoken supporter for an open market and a path to promotion/relegation. However, nothing changed. He selected different players, and drew criticism from the connected journalists of the U.S. Men’s National Team.

In the end, he did not produce the results and U.S. Soccer’s President Sunil Gulati bought out the rest of his lucrative contract and brought in old friend Bruce Arena to finish the job of World Cup qualifying. Arena failed. Gulati failed. The Federation failed.

Klinsmann, a contrarian, had the right ideas, but he never had the ammo to push for anything to actually be accomplished. He may have had a seat that looked like a throne, but he was really a jester for the real gatekeepers.

U.S. Soccer is held back by the closed market that has kept the Major League Soccer (MLS) franchise owners happy, but the rest of the sport hindered for over two decades. A closed market that provides a safety net to encourage mediocrity and punish greatness. It’s the antithesis of growth and success. It stands against everything that the American dream represents. Yet this league has prospered financially in the States because the Federation endorses it as the First Division of Professional Soccer.

The model of MLS is based on other professional sports in the USA, but the NFL, NBA, and NHL do not face international competition. It’s a model that survives in a vacuum but does not account for other leagues being in direct competition for fans, resources, and the almighty dollar.

By any metric, MLS is not the most popular soccer league for fans in the United States. It’s not even close. It’s never been. It’s survived thanks to the protections of a closed system, a monopoly that is controlled by only a few influentially rich individuals. U.S. Soccer’s endorsement of this charade is the most offensive unreported narrative over the last decade.

It’s a deception to ignorant fans who do not understand the system in place is built so there is a ceiling to the success of the Men’s National Team. There is a limitation to how good any club can be in this country because clubs cannot exist in the world of franchises.

If you are actually passionate about the future of this sport, supporting franchises that stand in the way of actual growth is a direct hindrance. If you want to see the actual potential of soccer in this country to be unleashed, act with your dollar and voice support for an open market.

An open market allows for clubs to move up the pyramid with promotion or to fall off with relegation. It encourages player development with success from clubs being built to sell-on players and profit from that business. It creates an environment where innovation is encouraged and individuals are driven to their best.

While it may seem like a grand dream, there really is an obvious path to changing the culture of the sport in this country. U.S. Soccer Federation needs to step up and realize that this current closed system is not just or fair. Or even beneficial to the mission of the Federation.

This is not a 10-year change or even a five-year change. This is an immediate change that can happen as soon as 2018. U.S. Soccer Federation tells MLS they need to open a path to the league and create an open market or U.S. Soccer will endorse another league as the First Division of Professional Soccer in this country.

It’s time for the arrogance of U.S. Soccer, MLS, and other figureheads to realize this failure is not fixed from a coaching hire or a hope that the next generation will be better. It’s time to change the basic fabric of the game in this country.