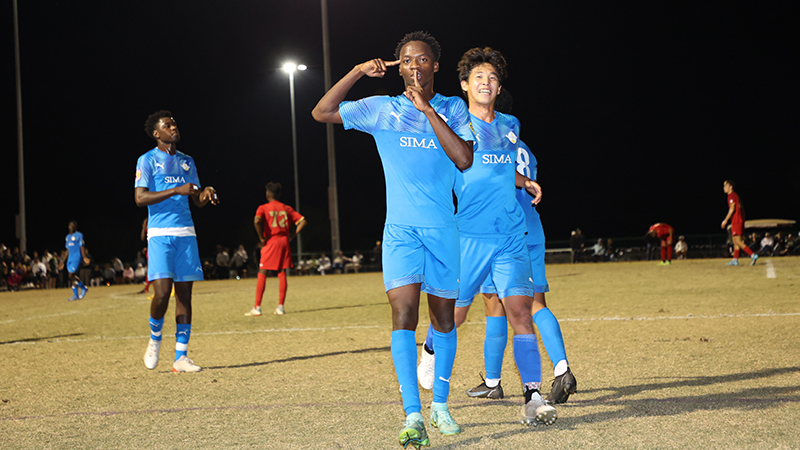 MONTVERDE, Fla. – The 2022 MAST champions have been crowned as SIMA Gold took down Leg A-Z with a three-goal second half to go all three matches without conceding a goal.

Stephen Annor scored a second-half hat trick, tallying six goals in the tournament, en route to the championship. The young striker was named tournament MVP for his efforts.

“My first MAST was 2019 and I didn't have the chance to play much,” Annor said after the match, “I knew if I started, we were going to win, but we finished second place. This year, I swore to my soul that I was going to fight to win the MAST here and I'm going to be the MVP. That's what I did. That’s what I put in my head and I did it.”

The first 45 minutes of action was a solid defensive effort by Darnell Bernier’s Leg A-Z, who the day before took down SIMA Elite with a similar strategy. A few scoring chances by SIMA Gold in the first half came close, but the score remained deadlocked at 0-0 at halftime.

“I told our guys, you know what you've got to do,” SIMA Gold Head Coach Domenic Pultrone said, “It was you know what you’ve got to get done. I told them that they're the master of their destiny and tonight, it’s not the refs, it's not the opponent that's gonna decide who's gonna win. It's you guys.”

The tourney favorites took that advice to heart in the second half as they started on the front foot. The game shifted dramatically in the 54th minute as Leg A-Z defender Reginald Eldime went in for a hard challenge on Malang Mandiang, earning him a second yellow and subsequent red card, putting the visitors down a man the rest of the match.

SIMA would capitalize on the man advantage just minutes later as Annor bagged his first of three on the night off a corner, whipped in by fullback and captain Shawn Smart.

Down a man and down a goal, Leg A-Z was forced to play a more defensive shape and rely on counter-attacks the rest of the way, but with the stout Montverde defense cleaning up any errant attacks, there were a handful of half-chances created on the other end of the pitch.

Congratulations to SIMA Gold for winning the #MAST2022!

A great level of competition through all three days and an exciting environment created by the participating teams and our Montverde Academy family! #LaFamiliaSIMA pic.twitter.com/EhDbmcKq3W

SIMA, meanwhile, continued their onslaught as Annor scored his second from inside the box in the 64th minute. A counter-attack started by Mandiang found the winger putting in a low ball for the striker to settle, turn and finish past Leg A-Z keeper William Clavier to double the lead.

The final strike came in the 71st minute as youngster Alfred Baafi smashed a low cross into the box, which Annor deftly buried, sealing his hat trick on the night.

“We did our best to try to get them ready and understand our model of game in a short period of time using all the tools to our disposal,” Pultrone said, “The classroom, the video, the team by team building activities, and it seemed to have worked.”

The final tally for SIMA Gold was 13 goals for and none against, holding clean sheets in all three matches played in the tournament.

In the third-place match, FC Florida Prep took down SIMA Elite on a stoppage-time free-kick from Dylan Talero, rounding the wall and keeper to seal a trophy for the team from South Florida. That was Talero’s fourth goal of the tournament, putting him second for goals behind the MVP Annor.

Stay tuned for our Best XI from the tournament coming tomorrow.