Women’s Team of the Week: November 9 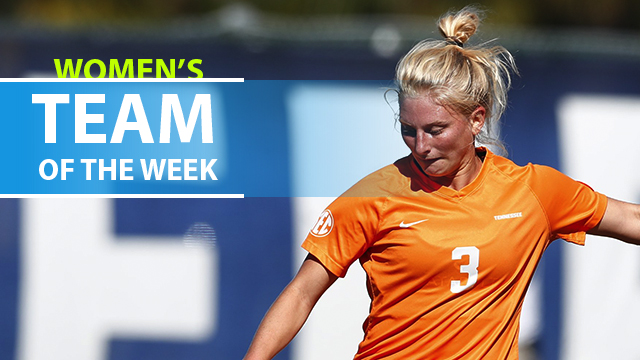 The NCAA tournament is almost here, and last week provided one last time for players to show heroics and clinch tickets to the big dance.

Central midfielder Abbey Burdette, the latest Player of the Week, helped her Tennessee Volunteer side win the SEC tournament. The senior from Maryland anchored her side’s midfield, securing wins against Florida, Ole Miss, and then defeating Arkansas in the SEC tournament title game.

Burdette did score a goal in the 5-2 win against Florida. But she was also a monster in the air, broke up plays, blocked shots, and helped her side possess the ball over the course of the week. Her aerial prowess was particularly crucial as Tennessee absorbed pressure against No. 1 seed Arkansas on Sunday. She was named the SEC tournament MVP after her side won.

Check out some of the other top performances from the past week of Division I women’s soccer action.

Women’s Team of the Week: November 1-7

GK Elizabeth Moberg, Memphis – The longtime AAC standout led the Tigers to a tournament title. After picking up a shutout on Thursday in the semifinals, Moberg made six saves during the 110 minutes, and then a pair of saves in the penalty shootout to defeat South Florida for the crown.

D Lauren Flynn, Florida State – It’s now eight ACC tournament titles in the past 11 years, as Flynn helped FSU win the crown in Cary. She scored the first goal in a 2-1 win against Wake Forest in the ACC semifinals, and then played 90 minutes in a 1-0 win over Virginia in Sunday’s final.

D Alia Martin, Michigan – The team that had the experience and quality to win the Big Ten tournament, Martin earned Defensive MVP honors after the Wolverines beat Rutgers in Sunday’s final. She played 90 minutes in both games, wins over Purdue and the Scarlet Knights.

D Sydney Cummings, Georgetown – After losing the final game of the regular season at home against UConn, the Hoyas won two games to capture the Big East tournament title. Cummings played every minute of both games, scoring the long goal in a 1-0 win over St. John’s on Sunday.

M Abbey Burdette, Tennessee – The senior played all but three minutes in Orange Beach, and is going to be crucial as the Volunteers prepare for the NCAA tournament.

M Marley Canales, UCLA – One of the few teams not involved in a conference tournament, UCLA won the Pac-12 title on Friday with a 3-1 victory over crosstown rivals USC. Canales scored a goal and helped the Bruins win the midfield battle to set the platform for a win.

M Roma McLaughlin, Central Connecticut – A brilliant weekend from McLaughlin helped CCSU book yet another trip to the NCAA tournament. She scored the winning goal in the 1-0 semifinal win against Bryant, and then had a goal an assist in the NEC tourney title game.

M Alyssa Frazier, Samford – A goal and two assists from Frazier ensured that Samford would come from behind to beat Furman in the SoCon tourney final.

F Lesley Kiesling, Wisconsin-Milwaukee – The sensational season for the Panthers continued with two wins to clinch the Horizon League title. Kiesling earned tournament MVP honors with goals in the semifinal and final. It marks the program’s fourth straight trip to the NCAA tournament.

F Messiah Bright, TCU – Bright’s great season came to a fantastic finish, as she led TCU to the Big 12 title. She scored twice in the semifinals, a 3-0 defeat of Texas Tech. In Sunday’s final against Texas, she scored the equalizer and then setup Camryn Lancaster’s game-winning goal in the second half.

F Lucy Shepherd, Hofstra – Thanks in part to Shepherd’s involvement in all three of Hofstra’s goal in the CAA semifinals and title game, the Pride are in the NCAA tournament. Shepherd scored the winner in the semifinals against JMU, and then chipped in a goal and assist in the championship match.