Round Robin: U.S. WNT on track for gold? 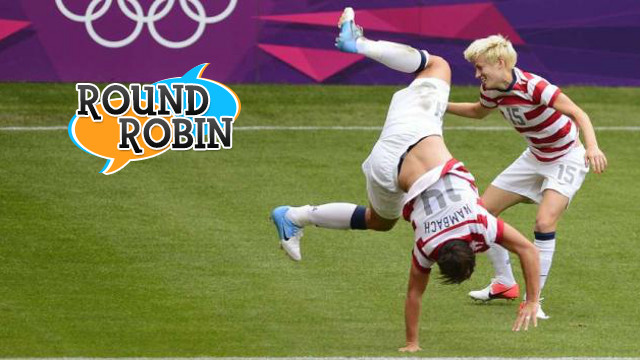 It’s on to the semifinals for the USA Women’s National Team in the Olympic Games. New Zealand had some good moments in the game and nearly tied the match on several occasions, but the U.S. ended with its third straight shutout. For the third straight game, too, the U.S. had more unfinished than finished opportunities.  So the question is, does the USA still look golden?

Caroline Yort: The U.S. had to play a lot of defense on Friday against New Zealand, and goal-scoring phenom Alex Morgan hasn’t put one in the back of the net herself since the opening match against France, though she has contributed in other ways, and had a great assist on Friday.  Morgan will have to relax and finish a few of her chances if the USA is going to win the gold.  The backline remains solid, no worries there, but we could be in trouble if we don’t capitalize on more offensive chances if we end up playing France again or Brazil in a gold medal match.

Robert Ziegler: Or Japan. I do think this team is capable of playing better soccer and it will have to do so in the upcoming showdowns.  The team’s speed is a very strong asset and it is utilizing that quite well in terms of being dangerous. The midfield has been adequate, but will have to raise it a notch in order to fulfill the dream of three gold medals in a row.

Travis Clark: Friday's result against New Zealand should serve as a warning to the U.S. women. It was a decent enough shift against an opponent who they were much more superior than, yet only managed to score twice after missing a number of pretty easy opportunities.

Winning close matches is obviously a good thing, and it still looks favorable for the USWNT to capture the gold. However, Alex Morgan needs to finish more of her chances as those could come back to haunt the team against better opponents.

Of course, the team is still on track and it looks like they are out to prove me wrong specifically.

Caroline Yort’s final word: So the consensus seems to be that we’ll take the gold, but Alex Morgan has to score.  Let’s see if she can get a couple against Canada.