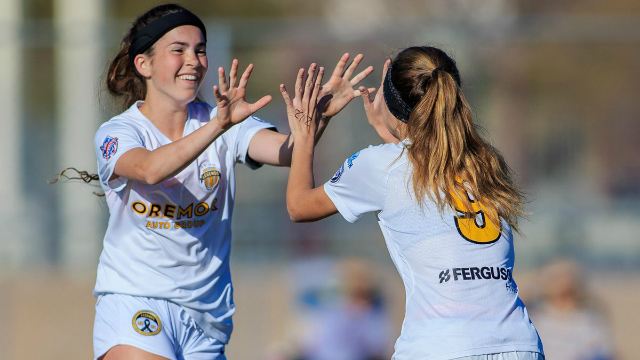 The US Youth Soccer National League 14U, 15U, 16U, 17U, 18U and 19U Girls completed their third and final day of matches at the Bettye Wilson Soccer Complex and Kellogg Zaher Soccer Complex in Las Vegas, Nev., alongside the 2019 Players College Showcase.

Sunday marked the end of an exciting weekend of National League Girls games, as the final day of play in Las Vegas saw six teams secure division titles. Meanwhile, two divisions will need an additional game to determine the champion.

All division winners punch tickets to the 2019 US Youth Soccer National Championships in Overland Park, Kan., while runners-up in the 19U age group also earn a berth to Nationals. Additionally, several sides in the 14U-18U age groups earned an automatic spot to compete in the league again next season.

Many teams in pursuit of division titles on Sunday found themselves in must-win situations. That was the case for 17U Pipeline 02 Pre-Academy Spirit (MD), which was able to pull away for the win it needed to secure the Blue Division title.

“It’s very difficult to finish on top because every team, all year, is preparing for the National League,” Pipeline coach Ryan DeSmit said. “It is the big thing that is on everyone’s schedule. The winter workouts, the late nights, the sacrifices the players and families have to put in to stay committed to a goal — it feels really good for the team to reach a goal they set out for earlier in the year.”

All division winners and 19U second-place finishers can now prepare for the National Championships in Overland Park. After overcoming the challenge of finishing on top during a long National League season, the teams are tested and ready to compete for the National title.

“The league was fantastic. We had, probably, five one-goal games,” said Dave Geerling, coach of 14U Black Division winner Lou Fusz Geerling 05 (MO). “There was never a blowout. The whole division was tough. Even that teams that didn’t do well, they lost by a goal or two. It’s going to prepare use well for Nationals in Kansas City for sure.”

Some highlights from Sunday’s matches…

14U Girls
In a winner-take-all 14U Black Division match, Lou Fusz Geerling 05 (MO) earned a 1-0 win against Beadling 2005 South Red (PA-W) to secure a first-place finish. The game was tight throughout and went to the second half in a scoreless tie. That changed in the 32nd minute on a great individual effort from Lou Fusz’s Morgan Struttmann. She made a strong run from the right wing — holding off multiple Beadling defenders — and blasted a shot inside the near post that flew into the roof of the net. Beadling provided plenty of pressure in the remaining minutes, but Lou Fusz held on for the shutout victory that helped it punch a ticket to the National Championships.

NJ Stallions 05 Fire (NJ) held off a pack of teams chasing it in the 14U Blue Division, as New Jersey used a 2-1 win against FC Alliance 2005 (WV) to claim first place. Olivia Russomanno and Claire Bucca each scored early in the second half to give the Stallions a 2-0 lead. FC Alliance, which had a chance to win the division with a victory and some help, pulled within 2-1 on an Adaline Cinalli tally in the 42nd minute. However, New Jersey held on to secure the victory and punch a ticket to Nationals as Blue Division winners.

A 4-0 win for D'Feeters 05 Black (TX-N) against Greater Binghamton FC GPS 05 Select (NY-W), combined with the other results in the group, allowed the North Texas side to secure the 14U Red Division title. Bailey Malone netted an 11th-minute goal, and an own goal gave the D’Feeters some early breathing room with a 2-0 lead in a must-win game. The D’Feeters kept the pressure on in the second half, and Delmy Benitez found the back of the net in the 35th minute to push the advantage to 3-0. Katarina Campbell capped the win with a goal later in the second half, as the North Texas side finished at the top of a tight group of teams in the Red Division standings.

In a matchup of the top two teams in the 14U White Division, TFA Elite 05 (OH-S) secured a 1-0 win against Pipeline Spirit PreAcademy (MD) to clinch the division title. TFA needed just a tie to finish in first place, but Shannon Ott gave the Ohio South side some insurance with a goal in the second minute. That strike held up, as TFA recorded its sixth straight shutout to finish the season with just one goal conceded.

15U Girls
In the 15U Black Division, Utah Celtic FC (UT) picked up a 2-0 win against Legends FC East Riverside (CA-S) to move into first place and clinch the division title. The game moved into the second half in a scoreless tie, but a Celtic player was taken down in the box to earn a penalty kick. Sierra Pennock placed the ensuing attempt just inside the right post to put Utah in front, 1-0. Celtic continued to threaten the Legends goal, and it doubled its advantage in the 79th minute. On a corner kick, Camryn Jorgensen made a run to the top of the six-yard box and volleyed the driven ball inside the left post to put Celtic in front, 2-0. Celtic held on to the shutout in the final moments to seal the division title and earn a spot in the National Championships.

LVSA 04 Red (NV) received goals from Isabelle Ayala, Brynn Covington (2), Amber Mallas, Michelle Madrid and Cali Laymon, as the Nevada side used a convincing win to pull even with GA Rush 2004 (GA) at the top of the 15U Blue Division standings. LVSA and GA Rush will play each other to determine the division winner.
TN United 04 Red (TN) recorded a convincing win over NCFC Elite (NC) on Sunday to stay in contention for the 15U Red Division title. Kathleen Collins and Hannah Clark each scored twice for Tennessee, and Allie Rice added a goal in the shutout victory. Tennessee will play current group leader Philadelphia SC Coppa Swarm 04 (PA-E) to determine the division champion.

Click here to view tiebreaker rules for the 15U Girls age group.

16U Girls
All 16U division titles were determined prior to Sunday’s games in Las Vegas.

17U Girls
Pipeline 02 Pre-Academy Spirit (MD) pulled away for a 6-2 win over Rise SC 02 Elite 1 (TX-S) on Sunday to clinch the 17U Blue Division title. The Maryland side jumped out to a two-goal lead behind goals from Payton Patrick and Baylee DeSmit. However, Rise’s Madison Bowers recorded a first-half brace of her own — capped by a strong run that ended with a left-footed shot tucked just inside the right post — to equalize the score at 2-2. Pipeline regained the lead shortly before halftime when Kelsey Fowler found the back of the net, and the Maryland side built off that in the second half. DeSmit netted two more goals, and Laney Cornelius added a late strike to cap the big win that allowed Pipeline to secure the first-place finish.

18U Girls
All 18U division titles were determined prior to Sunday’s games in Las Vegas.

19U Girls
With both teams playing for one berth to the National Championships, Legends FC South (CA-S) used a late equalizer to earn a 3-3 draw against Celtic FC 00 Premier (UT) — giving the Cal South side the point it needed to finish in second place in the 19U Red Division. Christine Goodman put Legends up in the 15th minute, but Brecken Mozingo immediately responded for Celtic to level the score. Mozingo later netted a go-ahead goal for Utah in the 36th minute, as Celtic pushed for the win it needed to jump past Legends in the standings. That lead lasted just six minutes before Legends’ Haley Arendt scored to make it a 2-2 game late in the opening half. Just before the break, Jamie Shepherd put Celtic back on top when she found the back of the net — ending an exciting back-and-forth first half. Celtic held on to that lead for a majority of the second half, but Legends did well to fend off several attempts by the Utah side to extend its advantage. In the 80th minute, Mackenzie Vehlow slid her attempt into the back of the net to give Legends the equalizer and force the 3-3 draw. That result allowed Legends to hold off Celtic and finish in second place, which gives the Cal South side a berth to the National Championships.

The National League’s alumni have gone on to prove themselves at the collegiate and professional levels, with former players competing in NCAA Division I, II and III, Major League Soccer, National Women’s Soccer League, the UEFA Champions League, the Olympics and the FIFA Women’s World Cup.