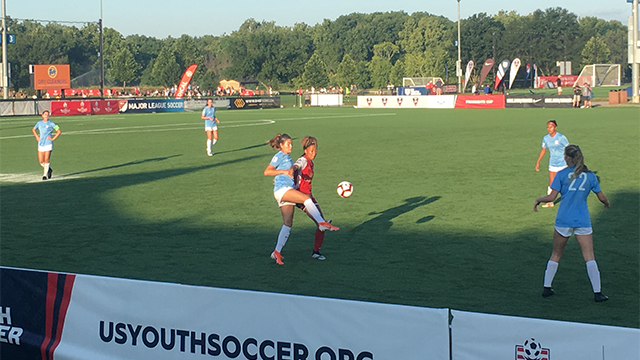 TopDrawerSoccer was on hand for a few games in the U19 Girls as well as a couple games in U14 Girls, U13 Boys, and U18 Boys.

The opening round of matches were U18 Girls, which started with a Campton United Red 3-2 victory over MapleBrook Fury. Cajun SC Rage 18/19 Academy defeated Princeton SA 1-0.

In the two U13 Boys matches, Michigan Jaguars 06 Green got a 1-0 win courtesy of a late strike from Angel Gael Medrano. FC Dallas 06 Premier took a tough 1-0 defeat against 2006 Pipeline SC Pre-Academy.

After several hours off, the action returned with the U18 Boys, where FC Dallas 01 Premier handled Michigan Wolves 01 by a score of 4-0. Future Player Academy scores the game winner late to steal the win with a score of 3-2.

Below are some of the standout players spotted in the game watched by TopDrawerSoccer.