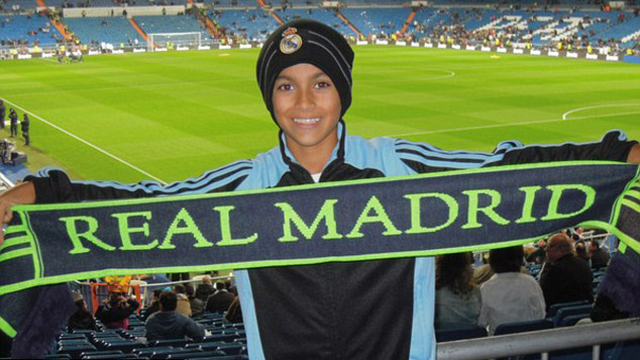 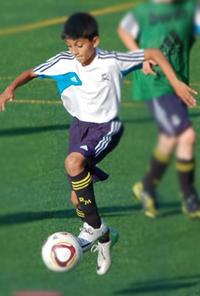 Joshua Pynadath’s father casually mentions his son has a record of keeping the ball up 2,300 times. Inspiring out of context, but even more impressive considering Joshua is an 11-year-old from Northern California.

His skills on the ball and tight control helped earn him a spot at the Real Madrid Academy for the upcoming season.

“Joshua started kicking a ball from the time he was a baby, but first started playing on a team with AYSO [American Youth Soccer Organization] at the age of five,” Joseph Pynadath told TopDrawerSoccer.com. “He switched to club soccer at seven years old.”

Interestingly, Joseph Pynadath said that his son did not specialize in soccer even at those ages, as Joshua played club basketball at a high level as well.

“There seemed to be a lot of good cross over for him between playing point guard in basketball and playing center mid/winger in soccer,” Pynadath explained. “When possible during his club years, he would do [soccer] clinics/training that were geared toward technical skills, although these were sporadic due to a tight schedule with Joshua also playing AAU basketball.”

So how does a player with a background similar to thousands of other children across the country differentiate himself from the pack and land a coveted a spot at one of the most famous youth academies in the world?

There is a two-fold response to the question: coaching and a desire to get better.

“He has been fortunate to be in an area that has a lot of terrific coaches and programs,” Joseph Pynadath said. “He also has consistently done futsal since switching to club soccer.”

Most recently, Joshua played with De Anza Force, a well-known club in Northern California that has developed a number of players for the collegiate and professional level.

The youngster also benefitted from an uncanny knack for picking up tricks from just watching YouTube clips.

“From the age of five to today, Joshua would watch YouTube videos of Ronaldinho and Cristiano Ronaldo and then immediately try to master whatever move they didm” Joseph  Pyndath said. “He still does this today.”

Surprisingly, neither Joseph nor his wife, Jackie, played soccer growing up, while both Joshua and his younger brother Jason do play the world’s game. Jason will be playing for one of Real Madrid’s satellite teams in 2013.

“We both grew up playing a lot of sports and continue to be active in sports – myself as a Masters Track runner competing in the 800m and 1600m and my wife as a longtime fitness/spinning instructor,” Joseph Pynadath said. “Our short soccer careers consisted of coaching our kids in AYSO.”

Both Joseph and his wife were born and raised in the States, which meant that the family would need to move to Spain for Joshua to officially join the Real Madrid Academy – something they will do this month before Joshua kicks off the new season with Real Madrid’s Alevin A team.

Another American trains with River Plate

Maximilliano Valdivia recently returned for a training stint at one of Argentina’s most famous clubs, River Plate.

“I received an invitation from Michael Kennedy who told me that six boys were selected to train at River Plate” Valdivia told TopDrawerSoccer.com. “He knew about me since his young brother and I had played on the same club team, which was a top level team that once earned the ranking as No. 1 in the nation.”

Valdivia said that this was his second trip to Argentina after training at Cefar FC two years ago.

“Since I had been to Argentina two years ago, I had an idea what to expect,” Valdivia said. “My experience the first time was getting to know the people, culture, and country but this time it was about the soccer. Argentina is like no other country in the world. They take their football serious. They train and play hard. It’s no wonder that they produce so many great footballers.”

Valdivia said he was blown away by the professional experience he had at the club, as he was treated like a regular at the club.

“I enjoyed competing everyday with other boys my age and pushing myself to get better.”

The teenager said his last memory for the trip was a mature gesture of hospitality.

“I was training and noticed a teammate’s shoes didn’t have much of the studs left. It was very cold so I decided to give up my new pair of Mercurials so that he could train and not have to worry about water going in his cleats. I was worried my parents might get mad by I knew it was the right thing to do.”

Valdivia describes himself as a late-developer who picked up on the need to play quickly early in his career as hard challenges would send him flying. He has since physically developed, but continued to play with quick touches for a spot in the midfield.

“I have always played midfielder on the right or left side. While in Argentina, the coaches allowed me to play attacking midfielder, which was a new position and I had a great time playing that spot.”

Valdivia returned to the States last month and immediately rejoined his club FC Golden State, which was US Youth Soccer Region IV finalist this past season, for Surf Cup. The rest is always short for the elite soccer player.