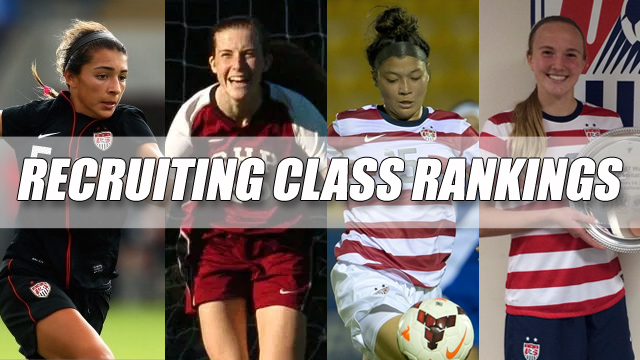 Signing Day is just under two weeks away, as college soccer programs line up the stars of the future, as a new race for trophies begins later this year.

Plenty of talented players are set to join the Division I ranks in the fall, including Mallory Pugh, the No. 1 recruit recently subject to rumors of potentially skipping college. Pugh is set to be a part of the top ranked recruiting class heading to UCLA.

One interesting twist to this year’s rising freshmen is the U20 World Cup. With the competition scheduled to begin in October, there’s a chance some of the top players in the class might sit out the 2016 season and redshirt.

Regardless of that, below is a look at the top 10 women’s recruiting classes for 2016. This isn’t a final list; rather an updated glance at the programs adjudged to have the best recruits commitments. The rankings are based primarily off the IMG Academy Top 150, international recruits and transfers – as things change on Signing Day and beyond, updates will be made every month leading up to the 2016 college season.

Please send any commitment updates or corrections to commit@topdrawersoccer.com.

News broke this week confirming Mallory Pugh’s inclusion in the class of 2016, cementing this class as one of the best ever in women’s college soccer. The Bruins have lined up the best players in the U.S. and Canada (Fleming), while Marley Canales is another promising midfielder and second ranked recruit in the class of 2016. Spanish transfer Julia Hernandez is an intriguing option as well, a Junior College All-American in 2015 as a freshman.