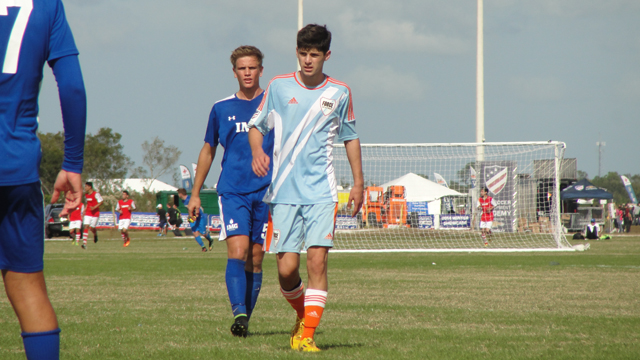 LAKEWOOD RANCH, FLORIDA – The 2014 Development Academy Showcase continued play on Monday with the U15/16 age group only in action plus the Academy Select game in the evening.

In the Academy Select game, the Red Team snagged a late goal from PDA forward Chaz Burnett to capture a 2-1 win in the showcase event.

The early game hiccups were expected as players learned the names of their teammates in the warm-ups prior to the game. The lack of familiarity on each team was reflected in the play with few passing sequences of any length and lots of individual play on the wings.

The first real good chance of the game came from one of those individual runs when LA Galaxy winger Ethan Zubak charged at the Red defense with the ball on his left foot. He tried to slip in a pass for forward Brandon Perdue, but he didn’t expect it and the ball was caught up in his cleats. Perdue eventually gained control of the ball and tried to get off a shot while falling down. Red goalkeeper Andrew Panneburg did well to block the shot for a corner kick.

Blue had another chance to gain the lead minutes later when Arriztotle Zarris stole the ball from a Red defender. Zarris picked out Perdue with his pass, but the forward was denied again. Reece Riggins blocked Perdue’s shot to keep the game scoreless through the first 30 minutes.

The Red team found its footing in the last 10 minutes and had three good looks at the opener. Noah Bushey tried his luck from 20 yards out, but his shot went just wide of the post.

Riggins had an open header 12 yards from goal following a corner kick a minute later. However, his shot went right into the path of Blue goalkeeper Roger (Trey) Miller. The last opportunity for Red came in the final minute of the first half when Ben Avir Espinal megged one play and cut it back for Burnett. Burnett’s shot just missed the near post and the two teams went to the break scoreless.

Dallas Texans center back Matthew Constant scored with his first touch of the game for the Red team. Constant entered at half time and did not see much action early, but he ventured forward for a set piece in the 43rd minute. Giuseppe Barone delievered a perfect set piece into the box that Constant smashed into the net.

The Blue team answered seven minutes later with a similar goal. Natahiel Adamolekun was hacked down near the right corner flag for a set piece. Matias Barraza delivered the free kick to the middle of the box and Sean O’Hearn directed it into the net.

Adamolekun nearly set up another goal for Blue 10 minutes later. The winger knocked down a long ball into the box for Barraza, but Red goalkeeper Alec Smir made an impressive diving save to keep it out of the goal.

With only two minutes left in the game, Red found the breakthrough. Barone was the talisman with tight ball control while dribbling into the box. The defense opened up for Barone and he picked out Burnett in front of the goal for the game-winner.

In a battle of two of the best academies, the New York Red Bulls battled through frustrating and snagged a draw with a late goal against the Whitecaps in one of the best games of the day.

Whitecaps struck first in the 16th minute when Daniel Sagno headed in a free kick from David Norman. Norman floated the ball to the back post where Sagno broke free from his mark and expertly headed the ball back across the goal, which left the New York goalkeeper helpless.

New York made some progress at breaking down the Whitecaps defense in the first half, but the Red Bulls never broke free of the Caps backline in the opening 40 minutes. The teams went to break with the Caps holding a one-goal advantage.

Whitecaps goalkeeper Luciano Trasolini came up with a pair of big saves in the second half to keep the Red Bulls off the board. Trasolini’s diving effort in the 73rd minute took some of the wind out of the Red Bulls’ sails after a nice passing sequence led to the shot.

However, Red Bulls would not be deterred. Kyle Casey broke free from the defense in the second minute of stoppage time but his shot hit the crossbar. Caps defender Kadin Chung blocked Sean Teixeira’s rebound effort.

In the fifth minute of stoppage time, New York found the equalizer. The Caps defense looked rattled for the first time in the game with all of the numbers pushed forward. Eventually, the ball found Rodrigo D’Andrea alone 12 yards from goal. D’Andrea played it off to Teixeira who passed it around the goalkeeper and into the net.

Marty Raygoza continues to make defenders look silly and Monday was no different in that arena. Raygoza opened the scoring in the 14th minute with a brilliant individual effort. The FC Golden State star dribbled through four players before a defender slid in and stopped him with his hand.

Raygoza buried the free kick from 20 yards out into the upper corner of the net.

Shattuck nearly had the equalizer nine minutes later when Hakeem Raibu ripped off a shot from inside the box. However, Michael Reis made the first of many great saves on the day.

With two minutes left in the first half, Jack O’Brien benefitted from a lucky bounce in the box after he dribbled past a pair of defenders and then lost out on a challenge for the loose ball. O’Brien found the ball on his feet after Reis was caught in traffic and couldn’t reach the loose ball. The Shattuck midfielder’s shot missed the frame of the goal and the teams went into the break with FC Golden State holding a one-goal lead.

In the second half, Raygoza added his second to push the lead to two goals and then Golden State added another with 15 minutes left.

Shattuck had multiple opportunities to cut into the lead in the second half, but Reis was too good on the day and luck was clearly on his side. In the 59th minute, Zachary El-Shafei beat his defender and hit in a cross to the middle of the box. The ball hit off the heel of a Golden State defender, struck the post, and rolled across the goal line before going out for a corner kick.

De Anza dominated the vast majority of the game thanks to a possession-heavy style of play. The same was the case for the Northern California squad on Sunday, but the early goal on Monday cured all woes.

Benjamin Reveno scored in the second minute thanks to a nice entry pass and a good run off the ball, which opened up the IMG defense.

The early goal forced IMG to chase the game, and the Florida team could not hold onto possession and De Anza Force played most of the half in front of IMG’s goal. The control of the ball did not lead to many shots though and De Anza only held a one-goal lead at the break.

De Anza doubled the advantage one minute into the second half when Adolfo Trujillo juked his defender and then passed it to Arda Bulut for the one-time finish.

The Northern California squad went searching for another goal minutes later when Eduardo Lopez played in a ball over the top for Bulut. The IMG goalkeeper took down the Stanford commit just outside the box. The referee showed a red card for the challenge.

After changing goalkeepers at half, IMG was forced to put a field player in goal. De Anza only managed one shot on goal over the next 30 minutes, but still prevailed comfortably with a 2-0 win.