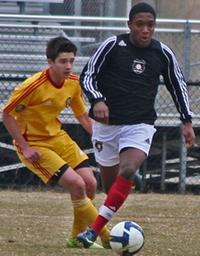 Reason: While we’ve previously highlighted Anyafo’s announcement, we caught up with the striker, ranked No. 138 in our 2013 class ranking, to get further insight on his decision.

“Much like my current high school I attend at Charlotte Latin, Lafayette College is a small Liberal arts school where I knew the transition into college would go smoothly,” Anyafo said. “I think I will fit in well in Lafayette's system because I can play in a two-striker situation or play out wide as a winger. I feel I can utilize my pace, athleticism, and strength in the Patriot League's physical style of play to benefit my new team."

Reason: “It’s an amazing soccer program and the fact that it was close to home was a plus,” Yassine said. “I had a friend that went to SMU for soccer a few years back and he really recommended it to me. I’ll also be joining my teammate Marco Carrizales, who is a great player.”

Clearly, Yassine has many ties to the program. He’s also been closely tied with success throughout his young career thanks to his versatility as an attacker. Yassine is a left-footed midfielder who is usually utilized on the outside but has the pace and skills to fill the middle as well. Count Yassine as one of FC Dallas’ top play-makers, and maybe eventually one of SMU’s too.

Cosentino, ranked No. 123 in our Top 150, is one of the top scorers on his Development Academy squad. He’s a quick, industrial player who is always a threat up top. Cosentino is joined in his commitment by Empire teammate Francesco Strangio, a midfielder also taking his talents to Canisius.

Patrick Edmonds (Matchfit FC) has signed to the University of Scranton for the 2012 season.

Brian Lowe (FC Frederick) has signed to Elmira College for the 2012 season.

Alex Toderica (Colorado Rapids) has verbally committed to Denver for the 2013 season. Toderica leads his squad with 13 goals scored this season.