For a North Carolina native like Chase Rhode, the chance to commit to the Demon Deacons was an option he couldn’t refuse, when it came down to what the school and soccer program offered him. 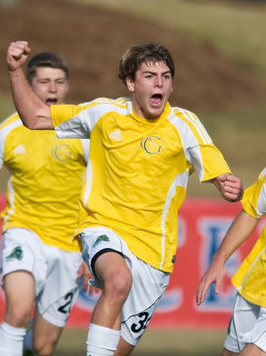 The center back knows a great deal about the school even though he won’t enroll there until next fall, thanks to experience with his high school soccer team.

“I’ve also loved Wake Forest because my high school does a pre-season summer camp there every summer and I’ve always enjoyed playing against the Wake players that play against us in the camp,” he said. “I enjoyed getting to know the Coach Ryan and Coach Jay better through this recruiting process. I know the coaching staff will push me to get better and help me grow as a player. I just finally look forward to suiting up and playing in my first practice with them.”

Watching a game against the Tar Heels helped seal the deal.

“I went to the game that Wake played UNC Chapel Hill and it was a packed house,” Rhode said. “It was really exciting to see that many people at a soccer game and it made me want to get out on the field even more. I like how all the coaches are demanding and try to get the best out of you, that makes for a better environment in practice and in games. Wake Forest also plays a similar style to that of my club team, NC Alliance, it is more possession driven rather than booting it up to a forward.”

Some college hopefuls look for the bright lights and big cities when searching for opportunities at the next level.

But for Virginia native Kendric Brown, part of the lure of the program was its Southwest Virginia backdrop.

“I enjoyed how Radford is in a secluded area where the mountains make more a nice view, there is no football team so it’s all about soccer, and I like how Radford has that downtown kind of vibe to it,” he told TopDrawerSoccer.com.

After attending a camp, seeing the campus up close and meeting the coaching staff, he was convinced that this would be the right move.

“What I enjoy about the soccer program so far is, that the coaching staff is serious, but they also know how to have fun. The guys are also a great group, and I enjoy their possessive style of play.

Defender Nicholas Badalamenti (Vardar) committed to Princeton for the class of 2014.