WAUKEGAN, ILLINOIS – The heat was back here on Saturday at the ECNL Nationals, but no hotter than the action on the field for a pair of championship matches as CASL Chelsea  (U17) and Slammers (U16) earned the right to lift the championship trophy by winning their respective title games.

Click any of the following links for coverage of Day One, Day Two, Day Three, Day Four, Day Five or Day Six

(Scroll Down for complete Saturday Results)

The video above tells a good story about the tail end of the match (along with the revelation that the TDS Managing Editor can’t count). Hawks were up 3-1 after 3 ½ rounds of post-match penalty kicks, but Christina Gibbons kept the North Carolina side alive with her clutch spot kick, then goalkeeper Taylor Francis made a vital save  and Alexis Degler converted her must-make penalty. When Hawks converted in the sixth round, Caroline Brown also made a crucial penalty to even the PK score at 4-4. Francis came up big again in round 7 and Morgan Reid drove home the winner to touch off a wild celebration. 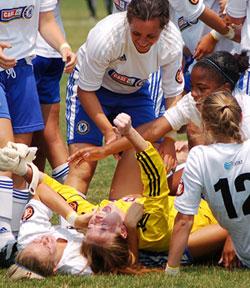 Damon Nahas’ team had gone up 1-0 when Joanna Boyles headed home a corner from Clare Wagner, but Michigan’s Summer Green tied the score. Green was active throughout overtime, keeping the CASL defense more than occupied in trying to stop her from scoring a winner.

Nahas was actually dismissed in the closing moments of overtime, but was able to join the celebration after the heroics of Francis, Reid and company.

Thanks to Joe Francis for help with photos and match details this week.

Things didn’t look good for Slammers in the 1st half when Sting powered their way to a 2-0 lead. Tatu’s side had kept the ball in the Slammers’ end and gotten an early penalty award after a handball, with Delanie Davis converting the spot kick. Later in the half, Emma Heckendorn found the back of the net and the Texas side was looking good.

McKayla Paulson was outstanding at outside back for Sting and central defenders Davis and Gabrielle DeLeon also showed talent on the back line, especially in winning balls in the air. Slammers’ best offensive moment of the half came when Kayla Mills played a good ball for MacKenzie Cerda, whose shot crashed into the outside of the net.

The hot, humid weather combined with Sting’s dominating play must have made a pretty potent recipe to induce Slammers to give up, but Walid Khoury’s side did no such thing

The lead was cut in half when Wong made a good dribbling run and hit a pass for Cerda, who beat the keeper 1v1 to make it 2-1. A Sting handball gave Slammers a scoring opportunity via a free kick, but Nikki Watts’ drive was tipped over the crossbar by Sting goalkeeper Danielle Rice.

Sting nearly made it 3-1 on a good serve by Summers, but Slammers’ goalkeeper Cassidy Rey punched clear. Slammers’ efforts to build out of the back were being hampered a good deal by the tireless work up front from Summers.

The Southern Californians did manage to tie however after some good work by Mills and a rebound effort that was driven home by Cerda. Cerda might have scored the winner herself in the closing moments of regulation, but Rice made a great leaping save to rob her of the hat trick winner. Sting also had a chance at a late winner when a hard-battling Sydney Kingston got the ball to Rachel Holden whose cross was flicked into the 6-yard box by Meghan Murphy, but no teammate could get a vital touch on it, and the match went to overtime.

The only real chance of the opening 10 minutes came from Cerda, ran across the top of the area and curled a shot just wide of goal. A wild sequence highlighted the 2nd 10 minute OT period however. Wong hit Cerda with a good pass and she made another weaving run into the area, only to again be denied her hat trick by the excellent Danielle Rice. Sting countered immediately and Holden split the Slammers defense and beat the onrushin keeper with her shot, but it rolled just wide of goal.

The match appeared to be going to penalties but Mills put in some good work on the left and put the ball in front of the goal from where Claire Oates ran onto it and scored the winner with less than a minute remaining for a dramatic championship win by Slammers.

The Slammers bench treated coach Walid Khoury to an icy celebration at the final whistle.

Khoury was ecstatic with the win.

Here’s what midfield standout Kayla Mills had to say afterward.