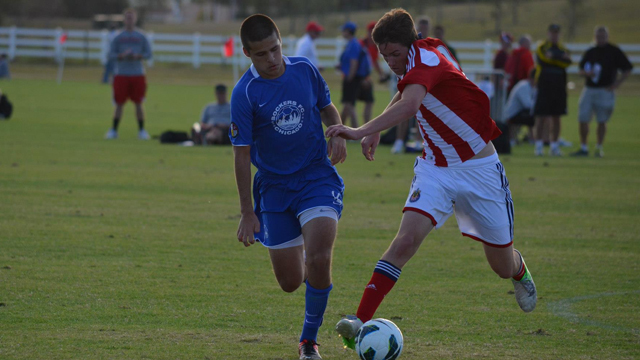 Chivas USA is signing Caleb Calvert to a Homegrown contract on Tuesday morning, according to a source close to the club. Calvert is the rapidly rising star of the club, as the striker finished the Academy season with 22 goals in 27 games while playing up an age group with the U18 squad.

The 16-year-old from Wrightwood, California was a verbal commit to UC Santa Barbara, but will now bypass the collegiate route for the MLS contract. With the dwindled roster at Chivas USA (20 players, at this moment), Calvert could be in line for minutes from the opening days.

He has already featured with the reserve team on a few occasions including scoring a goal against Seattle Sounders last month. The tall striker is a dynamic player with an obvious nose for the goal. He is relatively strong, despite his youthful appearance, and deceptively quick.

Last month, TopDrawerSoccer.com ranked the prospects in every MLS Academy and explained the situation with Calvert, who goes by the nickname Rooney due to his affinity for wearing the striker’s Manchester United Jersey to his club practices during his younger years. As Calvert explains, the nickname just stuck after a coach began calling him Rooney.

July could turn out to be a pretty memorable month for Calvert. The teenager will also debut at his first youth national team camp at the end of the week with the U.S. U17 Men's National Team at the StubHub Center before heading to Japan for an international competition. The camp kicks off on July 5 and the tournament in Japan ends on July 16.