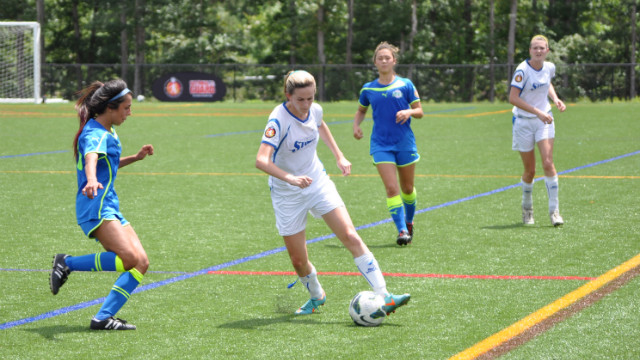 RICHMOND, Va. — After a day off to recover and rest on Saturday, ECNL clubs headed back onto the fields under warm conditions, with spots in the finals at stake.

While a handful of clubs had already progressed, a smattering of sides sealed qualification on Sunday. See which teams made it through to the finals:

Leave it to the youngest age group to put on the most entertaining show of the day in the ECNL Champions League. 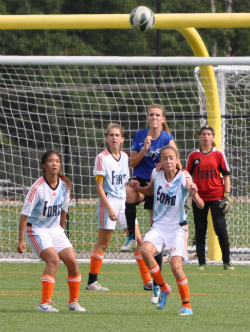 De Anza Force pulled away from San Diego Surf with three extra time goals to win 5-2 in one of the most thrilling games of Sunday's action.

The Force only made it to extra time after a dramatic equalizer by Kayla Fong in the waning seconds of the second half, as both sides provided the spectators on the sidelines with 100 minutes of attacking and entertaining soccer.

The two sides were no strangers heading into the semifinals, having faced each other in April – a 2-1 win for the Force on that day. This time around the chances flowed for both teams from almost the opening whistle, as Surf forward Catarina Macario getting plenty of looks at goal, while Force attackers Fong, Samantha Tran and Luca Deza a handful as well.

Macario opened the scoring late in the first half, after she was thwarted on earlier chances by Force goalkeeper Alyssa Fagel, finally besting the Force netminder from just outside the box to make it a 1-0 game before the break.

But the Force were far from finished, and Deza’s equalizer in the second half galvanized the NorCal side, which was on the front foot afterwards – however, Macario struck again on the counter to make it 2-1, an emphatic bullet into the upper corner.

After falling behind for a second time, the Force continued to up the pressure, though missed chance after chance, including center back Sophie Dertorossian hitting the crossbar from long range. Just when it seemed like the Surf would lock up the win, and both teams battling through tired legs, a cross into the box found Fong who tapped home for the equalizer with just 30 second left to play.

Both teams were wilting under the humidity in extra time, but the Force found just enough in the tank to pull away. Forward Kailee Gifford scored just two minutes into the first extra time, providing the platform for the win. Tran and Deza would tack on goals to secure the 5-2 victory.

Lying in wait for De Anza Force is PDA, which advanced to the title game thanks to a 3-0 win against rivals FC Stars of Massachusetts – the only team to beat FC Stars during the ECNL regular season.

And while the Massachusetts side started very well, forcing PDA’s goalkeeper Evangeline Soucie into early saves and hitting the post early on, the New Jersey club soon punished the early misses. Alexa Ferreira scored the opener, taking a pass from Margaret Roughly at the top of the box and firing it home over the Stars goalkeeper.

While FC Stars aimed to get back into the game, PDA pulled away in the second half. Shortly after smashing the bar from distance, forward Zoe Steck eventually found the upper corner on a driven shot from the tope of the box. Roughly rounded out the scoring, finishing off a breakaway with the Stars pushing numbers forward in search of goals.

With a spot in the U15 final already booked on the strength of a head-to-head win against Dallas Texans earlier in the week, Real Colorado nevertheless capped off a perfect group stretch thanks to a 2-1 defeat of the Dallas Sting.

Early forays forward from the Sting certainly troubled the Real Colorado back line, which rested a few starters with one eye on Monday’s final. After weathering the early storm, Cydney Billups notched the opener, spearing home a cross from outside the six-yard box to give Real a 1-0 lead.

The Sting answered right back, taking the ensuing kick off and equalizing seconds later, as Jordan Harr slipped behind the Colorado back line the tie the game.

Before the half, Real Colorado restored the lead, as Alexa Groesser found space at the top of the box and lobbed a high, looping shot over the goalkeeper to make it a 2-1 game.

From there, the Colorado side was able to maintain possession and keep the Sting at bay long enough to secure the win, making it three wins at three in Richmond and setting up a final clash with Eclipse SC.

The Illinois club finished up its group schedule with a 5-1 defeat over FC Bucks, having already secured qualification on Friday.

U16: Sereno slips into final round with narrow win

While one half of the U16 championship bracket was set – Slammers FC already booking a trip to the National Final with two wins in two group games – Group B was wide open entering Sunday’s play.

All four teams in Group B: PDA, Sereno Soccer Club, Real So Cal and West Coast FC could advance if results fell its way.

Thanks to its 1-0 win, and PDA’s late equalizer against West Coast, the Arizona side progressed in top spot and will take on Slammers FC in the final.

Group action didn’t wrap up the way Slammers probably projected. Opting to rest several starters against Albion Hurricanes FC, chances were few and far between for both sides, before AHFC took the lead through a breakaway goal from Chinelo Odobulu.

Alyssa Randall poached the equalizing goal in the second half for Slammers, but a headed tally from Christiana Sullivan provided three points for Albion, as Slammers turn its focus to a matchup with Sereno SC.

An early goal from midfielder Rachel Corboz led PDA to its third win in three games at the National Finals, wrapping up the group games with a 2-0 defeat of Sporting Blue Valley.

The sides were evenly matched for long portions of the match – PDA controlling possession, and owning a slim 1-0 lead thanks to fantastic strike from Corboz – but Sporting unable to turn its dangerous moments into genuine opportunities in front of goal, as most of its chances came on set pieces. Defender Cristina DeZeeuw had a couple of free headers but she couldn’t get them on frame.

Chances of a comeback slipped from slim to none when Sporting were reduced to ten players thanks to a red card, and Katelyn Walters scored to put it more or less out of reach at 2-0.

Matching up with PDA in the U17 Final will be Group A toppers Dallas Sting, which lost its final group game 1-0 against VSI West Florida Flames.