ZAREPHATH, N.J. – They say that the third time is the charm, and that was the case for Monday’s action at the ECNL National Event – at least from the weather perspective.

The wind finally calmed, and not a cloud was in the sky as clubs from around the country wrapped up the three-day holiday weekend with one final round of games to cap off the final event of the regular season. 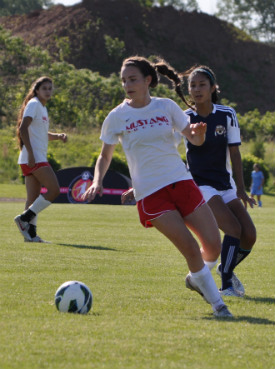 Here’s a look at some of the highlights from Monday:

A bad bounce helped key a come from behind victory, as Charlotte Soccer Academy rallied to top FC Stars in a matchup of two evenly matched sides

Christina Wakefield tallied first for FC Stars, cleaning up a hectic, goalmouth scramble, poking the ball home to get her side out in front.

From there, it appeared like the Northeast squad could end up making it a lop-sided results, as they enjoyed the slightly better opening half – denied two more goals by the referee’s whistle in the opening half.

After weathering the storm, the Carolina side got played its way back into the game, and eventually equalized in rather fortunate fashion. With a higher work-rate in the second stanza, a cross from Virginia McNeill hit a divot in the six-yard box and a slight breeze picking up at the moment carried it up over the goalkeeper and into the net.

With the game tied, it Charlotte would snatch all three points when Alison Price got behind FC Stars defense, finishing emphatically to seal the win.

Without a win in its first two games of the PDA National Event, TSC Hurricane found its offense in a big way against Ohio Premier Eagles to finish the trip out east on a high night.

A strong start would be all that TSC would need. Two goals within the game’s first 15 minutes by speedy attacker Sierra Beall – playing up an age group – staked the Oklahomans to a 2-0 lead, and they wouldn’t look back.

Ohio Premier forward Madison Costner looked most likely to make things happen in front, as she was a strong and dynamic runner on the ball, but she wasn’t able to get a good look at goal, thanks to a strong TSC defensive effort.

That strong effort at the back got an even bigger margin after the break, as the dynamic play of Kayla Musseman and Bailey Strong helped the team tack on three more goals.

Little separated these two sides for the course of 90 minutes, so it was little surprise that the game finished as a 1-1 draw.

From the opening whistle it looked like that might not be the case, with Mustang enjoying the brighter opening stretch, as Val Wirfel opened the scoring with a casual tap-in in front of goal after good work down the flanks. Wirfel, a guest player with the California-club, enjoyed a strong outing against Sereno.

However, the Arizona side would get back into it before the half, when Kelsey Moore dialed up a nice finish from distance, hitting a layoff from forward Gabriela Stoian past goalkeeper Remi White.

Midfielders Erika Perez and Alexis Tye continued to pose a handful on the flanks for Mustang, but couldn’t restore the advantage. Both sides would have chances for a winner, as Wirfel saw a good effort saved by Sereno goalkeeper Caitlin Parker, while Alessandra Dutto had a goal-bound shot blocked off the line and an excellent free kick saved by Parker. At the other end, Olivia Struckman nearly stole the win late on when her fiercely struck shut caromed off the crossbar with the goalkeeper beat.

Talk about a tale of two halves.

Over the course of the first 40 minutes, Charlotte Soccer Academy went toe-to-toe with the host side, jumping on the board first thanks to a goal by Allison Gray. Charlotte caught PDA’s back line napping on a set piece, and Gray found herself unmarked and buried a far-post finish after quickly taken free kick.

PDA got on the board before the half when Siobhan McGovern was there at the far post to tap home the equalizer from a Nicole Whitley cross, but for the most part it was an even half, with both sides holding their own and creating chances.

But a quick-fire double from Frankie Tagliaferri opened the floodgates. The forward, who put in an impressive all-around performance, scored two nearly identical goals within a minute of each other, putting PDA up 3-1.

The shell-shocked Charlotte Soccer Academy side couldn’t really muster much aside from forays forward to Gray, and little by little PDA added goals in front of a favorable crowd. Seneca Kinn-Gurzo scored a hat trick while McGovern added a second of her own to secure the win.

Two goals and an assist from U.S. youth national team forward Mia Hoen-Beck led the Virginia club side to its third straight win of the ECNL National Event, as McLean cruised past Heat FC.

Rebecca Voyack also scored and notched a pair of helpers, while Lauren Harkes and Megan DeGrafft also tallied for McLean. It ended a strong weekend for not just McLean U16s, but Hoen-Beck as well, who scored four goals across five games.