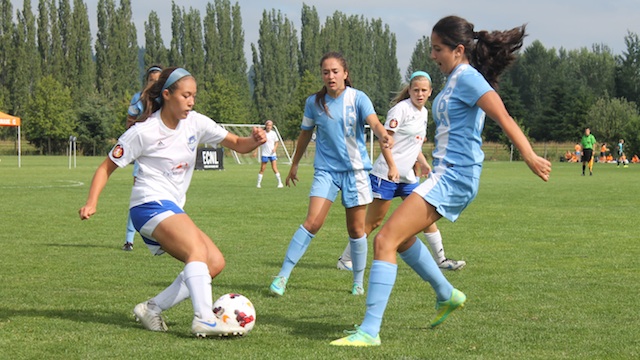 REDMOND, Washington — From second-best in March to front-runners in June. The PDA U14 side is certainly enjoying its soccer these days.

PDA scored two goals within two minutes of each other to streak past Charlotte Soccer Academy 3-1 on Wednesday at Sixty Acres Park and into sole possession of first place in Group A. The result was the exact opposite of a 3-1 loss to this same Charlotte team in the finals of the prestigious Jefferson Cup three months ago. Charlotte had given up just nine goals all year, and PDA scored a third of that total in one half on Wednesday.

It’d now take a mighty collapse for PDA to miss out on a spot in the semifinal knockout stage for the U14 national championship on Saturday. PDA only needs a draw  against Santa Rosa on Thursday to become one of four to advance. The team can move on with a loss provided Charlotte doesn’t make up the goal differential when it faces winless Bethesda in the same time slot.

PDA was perhaps initially nonplussed to be roped into a group with old nemesis Charlotte, the nation’s best U14 ECNL team during the regular season. PDA secured 12 fewer points than Charlotte during the regular season, and it needed a wild card to advance to the postseason when World Class FC won the Metro Division. None of that seemed to matter on Wednesday. Aside from an early lapse that forced PDA to trail 1-0 within the first 10 minutes of the game, the Gunners were deserved winners against the No. 1 overall seed in the tournament.

Now, it’s PDA, not Charlotte, on the verge of a spot in the knockout rounds.

“Charlotte are an excellent team,” PDA coach Mick Smith said. “We know how quick they can transition, so we went with two holding midfield players to try to make sure we were organized defensively and press with a group of four. We looked to try to isolate them in wide areas where we know we’ve got speed. They’re an excellent team, and today was a big win for us.”

Charlotte looked to play primarily over the top, and they cashed in when a searching long ball from Ashlynn Serepca caught Courtney Walker splitting two defenders. Walker sliced her effort across goal and put Charlotte ahead 1-0 just five minutes into the game.

Charlotte’s good vibes only lasted about 15 minutes. PDA gradually swung the game in its direction until Kara Borden hit the release valve with a well-taken goal 20 minutes in. A minute later, speedy winger Amelia Paternoster uncorked a vicious strike from deep to give PDA a 2-1 advantage. They added a third when Jyllissa Harris converted a penalty 10 minutes from halftime to finish off a team that had scored more goals than any other U14 team in the league this season.

The U15-U17 teams don’t get underway until Thursday, but this years’ ECNL playoffs are already off to a sizzling start. In 32 combined U14 and U18 games so far there’s been just one scoreless draw, and only three games ended with fewer than two goals scored. Go figure that one of those 1-0 games involved the Hawks, one of the nation’s most prolific scoring teams during the regular season.

It wasn’t for lack of trying. Connecticut FC stymied the Hawks’ lightning quick front line of Megan Buckingham and Jamie Cheslik and incredibly held both without a goal. Statuesque Connecticut FC keeper Darien Dunham organized the taxed back line beautifully, and CFC nearly got out of this one with a point to open up Group B like a Dan Brown novel with just one group game left.

But it wasn’t to be. With just 10 minutes to play, a fortuitous long ball squirmed through a pair of defenders and into the box for the onrushing Michelle Manning, who poked an agonizingly slow roller past Dunham for the game’s first tally. It was ultimately the game’s only tally. CFC’s attacking efforts were continually blunted by the Hawks’ sound back line helmed by Monreau DeVos, who hardly put a foot wrong. As a result, a CFC attack that’d scored four the day before was kept without a serious chance on goal all afternoon.

The win was the second in as many games for the Hawks, who now control the course of Group B. A draw against MVLA will put them through, and the onus is now on both CFC and MVLA to make something out of the ordinary happen on the final group day Thursday to turn the overwhelming tide.