ECNL Recap: Back into the thick of it 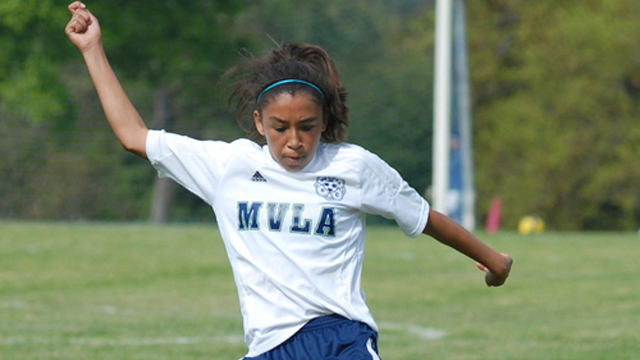 Hitting the road to Atlanta for the weekend, Carolina Elite Soccer Academy secured a pair of nice results. Two goals from Caroline Conti helped CESA off to a 3-0 win against Gwinnett Soccer Association on Saturday, following that up with a 5-0 defeat of Atlanta Fire. Christy Sheppard led the way with two goals and an assist in that one.

Staying at home, Concorde Fire managed to bag two victories over visiting Florida oppositions. Both games were settled by one goal margins, as Concorde beat VSI West Florida Flames 3-2 on Saturday and held on to defeat Orlando City SC 2-1 on Sunday.

Another team hopping in the car and tasting success was Bethesda SC. Traveling to Virginia, the D.C. area club beat Virginia Rush on Saturday 1-0, and stopped by Richmond and topped the Strikers 2-0 on Sunday.

Carmel United and FC Virginia battled it out on Saturday in Indiana. Carmel United gave FC Virginia its first loss of the season in Mid-Atlantic Conference play with a 2-0 result, as Hope Van Wagner and Emma Chambers tallied for the Indiana outfit. On Sunday, FC Virginia took on previously undefeated Ohio Elite Soccer Academy. After going down 1-0 early in the game, FC Virginia’s leading goal scorer Gabriella Gordon rocket her ninth goal of the season to tie the game 1-1 and ignited the team’s momentum. Georgia Holtkamp and Susanna Weisskopf responded with tallies of their own for the Virginia side, which won 3-1.

Forward Jojo Harber scored a hat trick to lead her Crossfire Premier side to a 3-0 win over Utah Avalanche. It was a weekend of double duty for the Pacific Northwest side, which topped FC Nova 2-0. Harber accounted for one of the goals in that win, while Mary Johnston tallied against FC Nova.

A big outing from Penn Fusion’s Rachael Dorwart guided the PA club to a 4-0 win over World Class FC. Dorwat scored twice and setup another goal in the victory, while Kimberly Sanford and Cashlin Copley also found the back of the net.

Mustang SC found a way past Santa Rosa United 3-0, with three different players all getting on the score sheet. Jessa Benson, Shanna Keil and Maya Lopez accounted for the offense.

Emily Fox dropped a hat trick for FC Virginia, leading her side to a 6-1 victory over Carmel United, making a long road trip well worth it. Christiana Davey, Isabella Jimenez and Julia Phillips also were in on the scoring. Sunday provided similar success for Virginia, which topped Ohio Elite Soccer Academy 4-1.

Tara Durstewitz scored the only goal of the game, leading Match Fit Academy to a narrow 1-0 win against Continental FC Delco.

PDA edged a pair of narrow encounters to open up Metro Division play. On Saturday, they topped FC Bucks by 1-0, and wrapped up the two-day stretch with a 2-1 win against Penn Fusion.

McLean Youth Soccer swept its road trip to Ohio and Indiana. Rebecca Callison and Jarena Harmon scored in a 2-0 win over Ohio Elite Soccer Academy on Saturday, and followed that up with a narrow 2-1 win against Carmel United. Kaitlyn Forsht and Rebecca Voyack each tallied for the Virginia side in the victory.

A goal each from Kelcie Hedge, Margaret Steiner and Jessica Udovich paved the way for Washington Premier in a 3-0 win against FC Nova on Saturday. It was more of the same on Sunday, as Morgan Weaver notched a brace and Hedge also score again in a 4-0 win over Utah Avalanche.

Two goals apiece from Tegan McGrady and Shaelan Murison Brown provided the winning margin for MVLA, which eased to a 4-1 victory against San Juan Soccer Club.

Playing for the first time since the end of December, World Class FC scored five and didn’t allow a goal in two games. On Saturday, World Class beat Penn Fusion 3-0, while also topping FC Bucks on Sunday by a 2-0 score.

Defending national champions PDA (or at least a good chunk of last year’s winners) opened up the season in dominant fashion, scoring 11 times in two games. It started off with a big day for Colby Ciarrocca, who scored two goals and setup two more tallies in a 5-0 win against FC Bucks. Ciarrocca was at it again on Sunday, with two more goals and an assist in a 6-0 defeat of Penn Fusion. Schuyler DeBree also added a brace in the win over the Fusion.