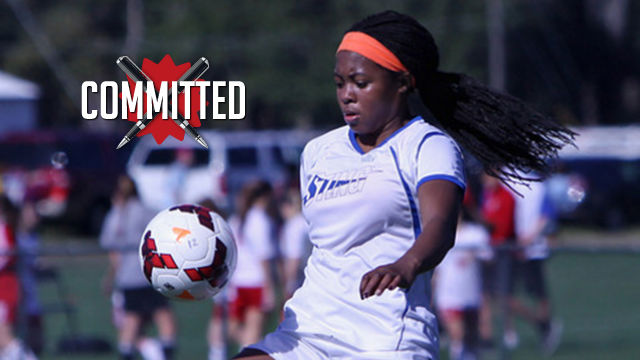 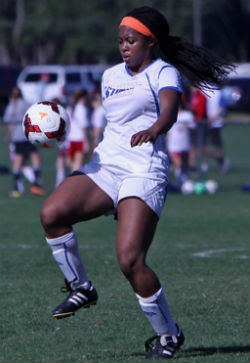 Blazing fast forward Mimi Asom pledged her commitment to join the Cardinal in the fall of 2015, yet another blue chip addition for head coach Paul Ratcliffe and the rest of his coaching staff.

Asom took her time during the process, never wanting to rush to a decision.

“The college recruiting process was a very long one for me,” she told TopDrawerSoccer.com. “It was of paramount importance that I be certain of the school that I committed to. This meant taking countless visits and exploring several options. In the end, Stanford's top-notch athletics combined with its equally stellar academic programs clinched it for me.”

With 16 goals in 21 ECNL games to this point of the club soccer campaign, Asom is doing her part to keep her Dallas Sting side towards the top of the Texas Conference standings.

The parallels between her highly-regarded club side and the standards of Stanford soccer was a huge plus in her ultimately picking the Pac-12 power.

“The Stanford soccer program prides itself on a tradition of excellence, the same sort of tradition I have become accustomed to at Dallas Sting with our ECNL team,” she said. “We have competed for the national title three times in the past three years, and have won once, been finalist and made the semis once. I want to continue competing at that same high level and Stanford soccer offers that. In addition the coaching staff, especially coach Ratcliffe, have the pedigree of managing a highly talented Stanford team capable of winning championships.”

Academically, it was almost a no brainer, as Asom harbors the ambition of possibly heading down a career in medicine.

“Stanford offers a pre-med track that I am very interested in pursuing,” she explained. “Also being at Stanford will allow me to explore the intersection of technology and medicine. Additionally, the beautiful and large campus along with California’s warm weather are probably some of my favorite aspects of the school.”

A technical, possession-oriented center midfielder, Tate Barney didn’t take long to decide that Kentucky is the right fit for her.

“I decided to commit to Kentucky from the minute I stepped onto the campus, I felt like it was the right college for me,” Barney told TopDrawerSoccer.com. “It’s a beautiful campus that isn’t too big or too small, has amazing athletic facilities, and it has a wonderful coaching staff.”

Barney also noted the program’s strides since Jon Lipsitz took over the team prior to the 2009 season. She noticed the team’s environment cultivated by the coaches.

“The soccer program is very welcoming, and the players and coaching staff make you feel like family from the moment you meet them,” she said. “The team has improved every year since Jon has been head coach, and I want to help continue that.”

From an academic standpoint, Barney is interested in pursuing the medical profession and plans on majoring in biology. She saw that the school could take care of her in helping nurture those ambitions.

“Kentucky has a stellar biology program that I know will help me be successful in whichever direction I decide to go,” she said. “I am extremely excited to be going to such a great school and into a wonderful women’s soccer program.”

Forward Brooke Ligtenberg (So Cal Blues) committed to Cal State Fullerton for the class of 2015.

Midfielder Allison Raniere (Sereno SC) committed to Arizona State for the class of 2015.

Midfielder Heather Piper (Vincent United) committed to Coastal Carolina for the class of 2015.