How Schalke is becoming Schalkemerica 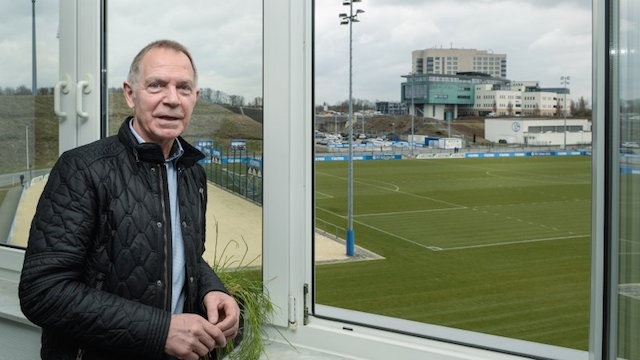 In late February, Schalke is expected to drop the last piece of its current American youth puzzle into place. At that point, the German developer club will have as much a claim to young American national team talent as any foreign club in the world.

Haji Wright was the first to go. The wispy wide attacker had spent much of 2015 with the New York Cosmos in the NASL, which ultimately turned into time spent under a heat lamp for Schalke’s benefit. Wright made his Schalke move official in January 2016, the moment he turned 18, to put the first pillar into place.

Weston McKennie was next. McKennie was widely considered the most promising player in FC Dallas’s highly regarded academy, a plaudit that means a bit more in North Texas than it does elsewhere. A versatile box-to-box central midfielder, McKennie was instrumental in getting FCD to the doorstep of the 2016 U18 Development Academy title, which FCD ultimately won. But McKennie wasn’t on the field for the July finale, a precusor for what was about to happen. Less than a month later, the moment he turned 18, McKennie was a Schalke player. The second pillar.

The final pillar could be the best of them. Nicholas Taitague’s profile hasn’t exploded as quickly as Wright and McKennie’s because he’s never been attached to an MLS club (Wright spent some time in the LA Galaxy academy setup). And his U.S. youth national team experience hasn’t quite yielded the eye-catching numbers of Wright’s or the tournament MVP trophies of McKennie’s. But Taitague’s ability is undeniable, and all indications point to the Virginian signing as soon as he turns 18. Which is on Feb. 28.

All this is impressive on its own. Schalke’s development lineage includes Manuel Neuer, Mesut Ozil and, more recently, current Manchester City ingenue Leroy Sane. But three promising Americans moving to one club within the span of 13 months begs obvious questions. Why Schalke? Why now?

The answer lies in the life and times of a man named Bodo Menze.

Menze is a Schalke lifer and a legend in German development. Menze is responsible for hauling the Schalke development system into modernity and presided over an incredible string of development successes in his time from 1991-2013. Under his stewardship, Schalke pumped out the likes of Neuer, Ozil, Sane, Ralf Fährmann, Benedikt Höwedes, Joel Matip, Julian Draxler, Max Meyer, Sead Kolasinac and scads more. He recently stepped back from the business of development to take on more of a removed administrative director role, and it was in that capacity that I spoke with him at the NSCAA Convention in Los Angeles in January.

There are perhaps more revered names in German youth development than Menze’s, but the list is incredibly small. And three young American players are now flying in a balloon he is largely responsible for inflating.

“All I can say is that the (American) boys who arrived (at Schalke) now have great, great potential and a great perspective,” Menze told me. “But at this point, I only can say this, and cannot go further. Even with an 18, 19-year-old boy, I cannot predict what is the perspective, and will he arrive in the Bundesliga. In this moment you need a little bit as well; you need the confidence of the coach, and you need a moment when the coach throws you in. You need a big moment to persuade.

“That is why I am a little bit defensive in my words, and what I hope at least is that all the three guys will have a very good time, and I can assure you that they have chosen the best academy for themselves. I 100 percent believe they will get ready for professional football. I think they are prepared to do this step to our Under-19 team. Haji Wright now for the moment has been to the training camp of our first team in Spain. The feedback of the sports director to me was a positive one. Let’s hope for them that their wishes will be fulfilled at the end.”

Menze was born in the shadow of Schalke’s Glückauf-Kampfbahn Stadium in 1953 and joined the club as a youth player when a scout stumbled on a pickup game of his in a Gelsenkirchen courtyard when he was 11. He played in the academy through the U19 level and bounced around to a number of clubs in a short pro career that spilled out into administration. As a 27-year-old with his first UEFA B license, he decided to take over a small, lower level team where his brothers played.

“I wanted to know if this is the right job for me,” Menze said.

It was. The experience was so formational Menze continued his education with a UEFA A license in the early 1980’s and bounced around in administrative roles in smaller clubs until Schalke called him home in 1991. This time as an academy manager to reboot its subpar youth apparatus.

At the time, Schalke was not the scion of competent first team management and almost incomparable youth production it is today. The notion it would produce mega-talents like Neuer and Ozil was then hard to fathom. The club was racked by instability in the 1980’s, the fruit of which was three successive relegations. Schalke gradually worked its way back to first division solvency by 1991, which was when Menze and his academy cohort decided the club needed more academy undergirding.

One of the coaches he brought in was a man named Norbert Elgert. Over the years Elgert gradually developed a reputation as one of the most brilliantly eccentric youth developers in Germany, and he’s still with the club as its U19 coach today. Elgert, it should be noted, is the current primary coach for those three Americans. There is no U19 coach in Germany with a broader and more lauded reputation.

“Just from my personal experience as a coach at Schalke, it’s all connected,” said Erik Stoffelshaus, who coached under Menze at Schalke and was just appointed Sports Director at Russian club Lokomotiv Moscow. “There’s nothing like, ‘I care for the Under-19s so I don’t care for the Under-17s.’ They’re all approachable, even though Norbert Elgert is pretty much like an icon in Germany. As a young coach Schalke was awesome, because I had our session at 4:15, and (Elgert) had his session at 5:45. So I’d finish my session and send the kids home, missed the warmup and went to watch his session. And I could ask a question and we’d sit down and go through it. Maybe when we talk about keys to success, that is one. Knowledge is being shared.”

Menze quickly went about establishing the roots of the Knappenschmiede, the academy that’s today considered one of the most robust developers of talent anywhere. Schalke was the first major club to establish a partnership with local schools in 1994, which allowed the club to streamline its scheduling and assure its players consistency in development terms. And today, it’s become a professional conduit unto itself. One of the club’s primary aims is to draw from its brimming youth teams and throw players into the fray early.

When Schalke faced Real Madrid in a must-win second leg in the Champions League knockouts in 2015, the club featured three 19-year-old starters pulled out of its own academy: goalkeeper Timo Wellenreuther and midfielders Meyer and Sane. Höwedes and Matip also started, and Schalke came within a single goal of knocking off moneyed Madrid. Now, Matip and Sane are playing for Premier League mega-clubs Liverpool and Manchester City. Meyer and Wellenreuther might not be too far behind.

This is all a product of the academy Menze helped build from rubble.

“You cannot make a talent,” Menze said. “That is the work of the parents. Sometimes I hear (from academy coaches), ‘I have made him.’ No. I say, coach, you have given him some lessons and perhaps an organizational frame to keep him in and to guide him to the point where he ended. But you did not make him. This is a little bit as well my philosophy. If you have money, you have to invest it well. We did not have big money at the time, so we helped ourselves with good ideas, with good coaches and good behavior in direction of the kids.”

This drives into every facet of life for Menze. He tends to speak at length to players not just about their on-field development, but about sound monetary investment and the importance of good decisions off it as well. The Schalke of today isn’t shy about handing out lavish salaries (at least in relative terms) to what it deems as deserving teenagers, which brings accompanying strings of its own. This sort of life advice packaged with the incomparable on-field technical work, Menze believes, is what separates Schalke.

In terms of a normal week in the academy, the trio of Americans can expect an intense distillation of prep work intended to prepare them for the first team. Each morning, players are shuttled from host families around Gelsenkirchen to school, which starts at 8 a.m. Three times a week, Schalke works with the local schools to engineer an individual training session in the morning with Schalke’s own coaches at the team’s facility.

On those days, players are bussed back to school for the remainder of the school day. In the afternoon, at 5:45 p.m., players return to Schalke’s academy for full team training four or five times a week depending on the age phrase. The only completely free day (for “social contacts,” as Menze calls them) is Wednesday. After the final training day on Saturday morning, U17 and U19 games take place on Sunday mornings, and then the system resets on Monday morning.

This is more or less life now for three Americans in one of the loftiest academies in the world. What happens next is largely up to them.