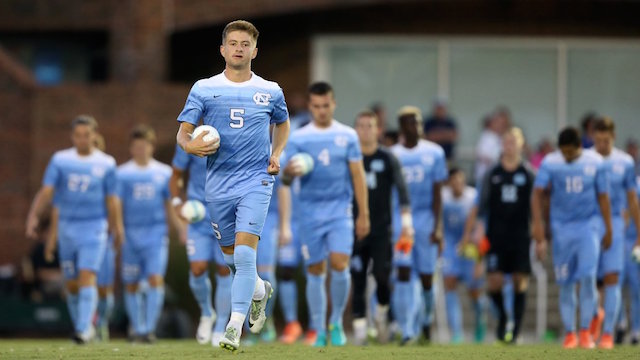 On Jan. 27, five days before the arrival of National Signing Day, Djordje Mihailovic signed a Homegrown contract with the Chicago Fire.

The 18-year-old midfielder, arguably the most prized talent currently playing in the Fire academy system, was the Fire’s first Homegrown signing since the club sprung for Joey Calistri and Drew Connor more than a year ago. Mihailovic’s experience in U17 MNT residency, versatility in the midfield and ability to provide the focal point for a build all made his signing a no-brainer for the Fire. Chicago’s struggled to integrate its Homegrowns, finding its only brief flash of locally-sourced success with Harry Shipp before he was unceremoniously traded to Montreal after the 2015 season.

Perhaps lost in the shuffle was the fact that Mihailovic, the No. 3 recruit in the 2017 class, had to set aside a college commitment to do it.

More than a year ago, Mihailovic pledged to North Carolina amid a veritable avalanche of highly regarded Fire players moving east. Mauricio Pineda and Cameron Lindley had already committed for 2016, and the addition of a midfield metronome like Mihailovic in 2017 made North Carolina intensely dangerous on paper. The fact that North Carolina rolled to the College Cup semifinal in 2016 - and only lost on a penalty shootout lottery to Stanford - only reinforced the program’s rising tide.

By any objective measure, Homegrown signings are on a historic rise in recent years. Since the start of 2015, 47 players have signed Homegrown contracts with MLS. That’s about a third of all the Homegrown signings in the initiative’s history - a span of eight years - condensed into an eighth of its lifespan. That’s a testament to a variety of factors, from the Development Academy’s lengthening existence to the  relatively cap-friendly contracts Homegrown players command. More than anything, a younger wave of MLS coaches brought into the league since the Homegrown rule was instated simply seem more interesting in using it.

A handful of men’s college programs have been particularly hard hit by the league’s expansion into Homegrown contracts. UCLA has long had a practice of recruiting promising pro-hopefuls, and they had a brutal offseason because of it. Abu Danladi and Jackson Yueill both signed Generation adidas contracts with MLS, while Seyi Adekoya, Reggie Cannon and Jose Hernandez all left before their senior year to sign Homegrown contracts this offseason alone.

Almost every every College Cup team in the last few years has had at least one or two highly regarded MLS academy alum, and each has their cautionary tales about losing players between the time they committed to the day they were slated to show up on campus. There’s rarely any animosity - coaches understand the landscape as well as the players - but it does throw the system into haywire to a certain extend.

And when it’s a cornerstone recruit like Mihailovic? Well, there’s not much to be done about that in these modern times.

“It’s just part of it,” North Carolina coach Carlos Somoano said. “You really have no other alternatives at this point. You’ve probably seen a few international students and transfers on our rosters. That’s how you do your best to fill in when those things happen. I think that’s probably why you see the growth in those two markets in a lot of schools, not just ours.”

North Carolina’s done about as well as anyone in the last few years in recruiting highly regarded MLS players, but the Tar Heels certainly haven’t been immune to defections. North Carolina’s 2016 class earned the No. 1 ranking in the country thanks partly to the twin talents of Pineda and Lindley. Both stayed, and even if neither makes it four years they’ve already been value added to the program. But North Carolina simultaneously lost prized center back recruit Auston Trusty to the Philadelphia Union’s USL team Bethlehem Steel before the year began, and Trusty has since been named to a U.S. U20 MNT World Cup qualifying roster.

Even with the loss of Mihailovic, North Carolina should still be highly ranked again in 2017 (they were No. 2 before his announcement). John Nelson and Lucas del Rosario are the foundation of another nationally significant class, and it hasn’t dampened Somoano’s resolve to chase top-tier Homegrown eligible players.

But there’s little question the landscape has shifted even over the past few years. Somoano said his coaching staff will often weigh up a potential commit’s seeming dedication to the college game, and if there’s uncertainty they might think twice about extending an offer. Even if that player happens to be among the best in his class. It often isn’t worth the uncertainty.

“But it’s a tough one, because even some of the guys who didn’t show up or left early, these guys were really committed to our program. It never surprises me if someone doesn’t show up, but some of the kids that haven’t, they were really into it. It just happened that the opportunity came and they had to make a tough decision. I don’t hold anything against them for that. Quite the contrary, we still have relationships with some of those people who never showed up on campus.”

For elite college programs today, Signing Day is less a bellwether - more changes in soccer signing classes between February and August than in any other sport - than it is a sign that the tectonic plates of the game in America are constantly shifting and moving. And for elite programs insistent on chasing players also weighing up pro options, they’ll continue to run into late defections and mid-summer scrambles to plug the gaps.

For most programs, that’s a risk they’re still willing to take. No matter what happens on Signing Day.

“There’s no doubt that until preseason comes, you’re still unsure (about which players will show up),” Somoano said. “But I could say that, too, we encourage our players to play throughout the summer and utilize the PDL and the leagues that are available in the summer. They could get injured, too. At all levels you’re dealing with that, whether it be by injury or personal circumstances or someone who just decides to go in another direction. In our case, it’s part of it. You have to have plans and backup plans and backup plans after that.”