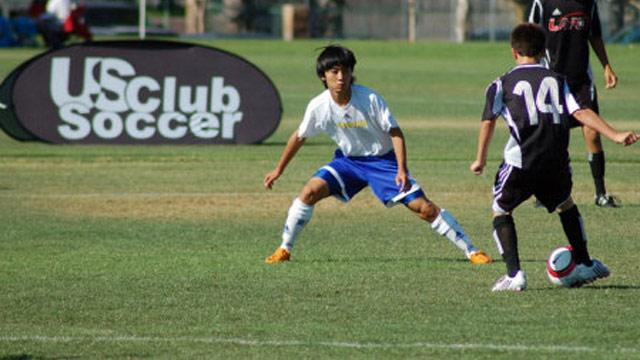 Even on an off day he’s deadly, and stands alone as the best player.

“Rui is very technical, quick, shifty, and creative with the ball. He knows how to get defenders on their back foot to do what he wants,” said U16 San Diego Surf coach Montele Graves. “He is good at moving the ball towards defenders and better in making runs off the ball.”

Rui Adachi plays for San Diego Surf U16 Academy team with teammates – Corey Baird, Hector Hernandez, Ryan Kretz, Leon Prikhadovskly, and Michael Pescatore – and has been making headway in his second year with the squad.

Rui Adachi
His skills were clearly displayed this past weekend when Surf faced off against Cal Odyssey. In a scoreless draw, the highlight of the match was Rui’s ability to control the middle of the field and drive the attack forward to create some dangerous chances.

He displays confidence on the ball and a calmness that is not seen in many 15-year-olds.

“He definitely knows how to read the game beyond his years for a typical American player,” Graves said.

That’s because he’s not a typical American player. He’s actually not even American. Rui migrated from Tokyo, Japan five years ago and has been playing soccer all his life, and for the Surf since 2009. To the fortune of all involved, there weren’t any adapting pains coming to a different culture to play the game.

If one thinks about it, soccer is played everywhere, making the spoken language secondary.

“I actually didn’t know he wasn’t American until he told me he had to go back to Japan to renew his Visa,” Graves said. “There were no obstacles in adapting to the new team. Soccer is a universal language and there is nothing there lost in translation. He speaks English very well and doesn’t have a strong accent at all.”

Since his transition to the club system has been smoother than most would have anticipated, Rui has quickly been a weapon for Surf, becoming one of the most technical players.

However, Graves has noted his physicality is one aspect that Rui must work on. Against stronger players, he must be able to jostle successfully for the ball, a key to playing up the field.

With his capacity to be even-footed, he is the most versatile player on the field. But Graves has been a little hesitant to move his star player from a winger to a striker.

“I thought about playing him as a forward and he’d gotten better over the last several months as the academy started. In the summer, we played him up top as a forward but he wasn’t composed in terms of his finishing,” Graves said. “His goal scoring ability isn’t to the standards of what I want him to be. If he could improve his finishing, we will definitely use him up top more often.”

Regardless of where he plays, Rui has a bright soccer future in America.

“He sets the example in the technical proficiency that is lacking in American soccer at the club level,” Graves said.

And if he is successful in this country, it will continue the further debate on nature vs. nurture in soccer; posing the question of whether Rui succeeds because he is a foreign player that has played early soccer in a foreign style or because the American soccer system has helped Rui to reach the pinnacle of soccer superstardom.

We shall see.
Related: Players To Watch,