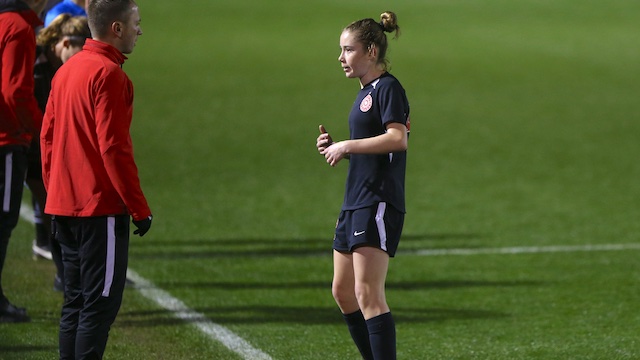 Oivia Moultrie is taking it to the courts in order to get back on the field. The No. 1 player from the Class of 2024 filed an antitrust lawsuit against the National Women’s Soccer League (NWSL). The Athletic's Paul Tenorio broke the story last week and followed up on the developments this week. The 15-year-old is attempting to blaze a new path for the elite player in women's soccer.

Moultrie, previously an early commit to the University of North Carolina, joined the professional ranks when she signed an endorsement deal with Nike in 2019. She was only 13 years old when pen hit paper on that contract. She’s spent the last two years training with the Portland Thorns, and only eligible to play in official games with the club’s academy teams. At 15 years of age now, she’s ready to join the professional ranks. The Portland Thorns want to sign her to a professional contract. The league is saying no.

It’s a strange case for a handful of reasons. The league preventing a club from making a decision that the club thinks will help grow the league seems to fly in the face of the mission of the league. The league also let this get to the point of a lawsuit, even though as Tenorio points out there is no collective bargaining agreement (CBA) in place, which is usually where age limitations are decided for a league.

Also as Tenorio points out, there are some questions why the league is fighting this and why the players are supporting this considering the influx of talent that this will bring if Moultrie is successful. Cheaper young talent would like push out older, middling players - an issue for the players association and something the owners would support to keep the salary costs down.

What's interesting to me, though, is numerous lawyers I've spoken to said an age limit is something the players should be asking for — no young teens means more jobs for older, mid-class players — not owners. They were curious why NWSL is paying legal fees to fight this at all. https://t.co/RomULUgfGY

Fittingly for being in Portland, Moultrie is a trailblazer. And this latest conquest is the biggest challenge yet. Moultrie has always been comfortable in the uncomfortable. She spent seasons playing alongside the boys in the Boys Development Academy - even before there was a Girls Development Academy. She was scrapping it up on the field for one of the best teams in the country.

The old adage that “if you are good enough, you’re old enough” seems applicable here. Comparing apples to apples, MLS struggled with many teenage signings through the first couple of decades of the league’s history. The pathway for a player from the academy to the first team was treacherous and there were plenty of horror stories along the way. The success rate was embarrassing.

MLS tried to help with initiatives for Homegrown talents, but franchises also saw the benefit of player development and the successful ones did a better job identifying players and providing support to make the transition to professional game easier for a teenager. The recent success stories appear often on the Men’s National Team.

One way or another, Moultrie is likely going to be the first one to break the barrier for the NWSL. Her support network is robust enough to help make this issue too big of a problem for the NWSL to bury for too long.

It is absurd the league is fighting so hard to be a gatekeeper in this issue, but hopefully the league will fight just as hard to support her when she is officially allowed to play in one of the games. Moltrie’s trailblazing will open the door for more players to follow in her footsteps. She might be the first through the door, but she won’t be the last. It's time for the league to grow up. Let the clubs make their own decisions on player signings. If the Thorns wants to invest in a youth player, they should have the opportunity to do just that.