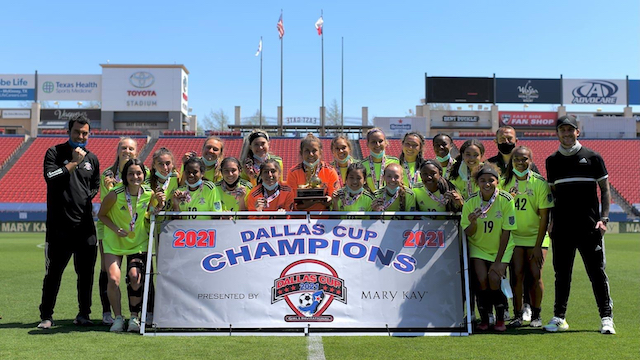 The Dallas Cup Girls Invitational presented by Mary Kay wrapped up on Thursday with the championship games in the U16, U17, U18, and U19 age groups. Solar was the toast of the day with three championships for the local club.

Vivian Geesbreght scored early in the first half and Emeri Adames scored late in the game as Solar, while playing up an age group, won the 2021 Dallas Cup Girls Invitational U16 Championship on Thursday.

It was a bit of revenge for Solar, which lost 0-1 to DKSC in group play. Solar was forced to square off against their older team at the club, the Solar 05 team. The younger group prevailed in a 3-2 result to book the rematch against DKSC in the final.

Solar took advantage of the early start and bounced out to an early lead with a goal in the 12th minute. A corner kick found Abigail Mills in the box. The center back brought the ball down with her first touch. Geesbreght, like any good striker, bounced on the chance and put home the opening goal.

DKSC settled into the game later in the half, and had some good spells of possession. Attacking midfielder Amalia Lopez was the key piece in the buildup for DKSC when the team found some success. However, Solar was organized and the chances were few and far between.

Solar went into the break with the 1-0 lead, which was earned but a bit of a surprise considering Solar’s leading scorer Kennedy Fuller, an 07, was not available due to injury.

DKSC’s best chances of the second half came from Lopez. The midfielder had a shot from distance in the 49th minute that hit off the top of the crossbar. She also had an opportunity on an indirect free kick inside the Solar 18-yard box in the 66th minute, but her shot went over the bar.

Solar had a couple of chances to add to the lead. Substitute forward Alexandra Love used her speed to get behind the defense. She benefitted from some great passes from Villarreal. Love hit the post on a chance in the 51st minute. DKSC goalkeeper Carmen Lopez made a great save on a shot from Love in the 77th minute.

Solar added the insurance goal in the last minute before stoppage time. The play started with Villarreal breaking the pressure with some nifty footwork. She found Adames on the left wing. The speedster had an impressive dribbling display to evade a few defenders. With a bit of space, Adames drilled a shot from the top of the box that hit off the bottom of the crossbar and went into the net to give Solar the 2-0 lead. 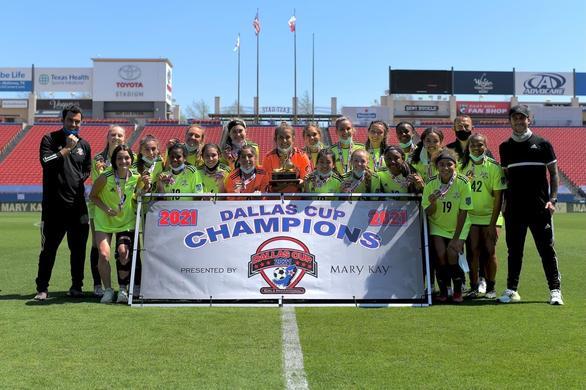 It was all Solar SC in the first half in the 2021 Dallas Cup Girls Invitational U17 Championship. Solar grabbed a 2-0 lead in the opening 45 minutes behind goals from Sydney Becerra and Zoe Calyer.

Becerra scored the opening goal in the 7th minute on a kick from the spot. Jaedyn Shaw provided a great pass to Tyler Isgrig, who was brought down in the box for a penalty kick. Becerra slotted it home.

FC Dallas goalkeeper Olivia Ramey was the busiest player on the field in the first half. She made four saves in a 20-minute span as the Solar onslaught was unstoppable. Treasure Byars, Truth Byars, and Allyson Richardson all peppered the FC Dallas keeper with shots in the first half.

Calyer was the one to break through and score the second goal of the game. The defensive midfielder got on the end of a service into the box and hammered it home to give Solar a 2-0 advantage in the first half.

FC Dallas, as they always do, switched goalkeepers at the break. Taylor Richardson came on and made an incredible save in the 47th minute on a shot from Shaw. The Solar midfielder hit a rocket from 30 yards out that Richardson denied with a one-hard diving save to keep it out of the upper corner of the net.

Shaw and Solar kept the pressure on through the second half. Shaw found the third goal of the game in the 61st minute. The talented midfielder showed great composure in the box and dribbled through a couple of defenders before she tucked in a shot past the goalkeeper.

Richardson had another look at finding a goal on the day, but the right back was denied by the woodwork in the 62nd minute. Shaw snagged her second goal of the game a minute later. She hit another screamer that blew past the keeper and hit the back of the net with ferocity.

FC Dallas had a chance to cut into the lead in the 65th minute. Kaydence Ramirez was fouled in the box for a penalty kick. Ramirez took the shot from the spot, but her effort hit off the crossbar.

Solar turned to the bench to keep the pressure on the FC Dallas defense. Ella Eggleston had a nice chance that went just wide. FC Dallas defender Hayden Colson saved a shot off the line in the second half, as well.

Solar cruised to the victory over the last 15 minutes of the game, which was the second title of the day for the club.

Solar completed the three-for-three sweep on Thursday with a win in the U18 game in the afternoon. It was a tight contest in the first half as teams battled for every chance. The best look from the opening 45 came in the 29th minute when a corner kick from Solar’s Delaney Daly looked like it was headed directly in the goal, but FC Dallas defender Abby Worthy saved the shot off the line.

Solar goalkeeper Anna Blankenship did well off her line to shut down a couple of chances from FC Dallas. Blankenship also showed off her skill with her feet as she looked very comfortable in possession and building from the back.

Kalista Hough scored the opening goal for Solar in the 54th minute. It was Daly again providing the service. The captain of the side put in a perfect ball to the far post that found Hough wide open. The striker did well to one-time side-volley home the chance for the opening goal.

Hough doubled the lead minutes later when she used her speed to break free down the left flank. She unleashed a quick shot that snuck into the the bottom corner of the net to give Solar a 2-0 lead.

Amelia Leggett added the third goal of the game for Solar. The forward did well to bring down a cross from Daly. Her first touch was perfect and then she did not waste a second to finish the chance inside the box.

FC Dallas goalkeeper Mackenzi Goen denied Leggett another goal with an outstanding save in the 73rd minute. Goen stopped Leggett again in the 82nd minute.

The Solar defense held strong throughout the game and Blankenship recorded the shutout in the 3-0 victory in the championship.

Maia Tabion opened the scoring immediately on the first shot of the game. The winger did well under pressure to fire off a shot that went past the goalkeeper and nestled into the corner of the net.

Crossfire kept up the pressure after the goal and was rewarded with a second goal 10 minutes later. Kate Toomey, the Princeton recruit, scored the second goal off an assist from Tabion.

FC Dallas goalkeeper Camryn Ciborowski made a nice save midway through the opening half to keep Crossfire within reach prior to the break. Maia Brown had an excellent block on a shot from Kayla Adams to deny another chance in the first half.

Valerie Flores pulled one back for FC Dallas right before half. FC Dallas’ pressure earned them possession of the ball in the attacking third. The ball was worked wide to Maeve Jones who played the ball into the center for Flores, who had a one-touch finish for the goal. It was the first goal Crossfire has conceded during the tournament.

Crossfire poured it on in the second half with three more goals to capture the 2021 Dallas Cup Girl Invitational U19 Championship with a resounding 5-1 victory.