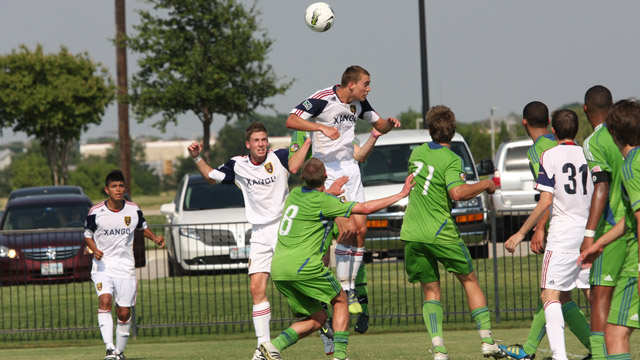 Baking on the fields of Frisco during the last week of June was not only the thousands of elite youth soccer players, scores of college coaches and scouts, and a myriad of U.S. Soccer officials, but also this intrepid reporter.

After finishing another year of action in the Development Academy – or nearly – U.S. Soccer is wrapping up its fifth year of running the Academy.

With another year in the books, it’s an apt time to stop and reflect on the status of youth soccer in the United States, the impact of the Development Academy, and various other issues likely to emerge down the road.

U.S. Soccer has made significant strides with the Academy… 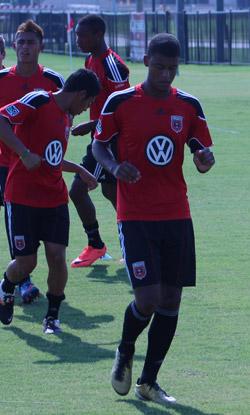 MLS clubs must lead the way in
development.

By watching a handful of the teams at Academy Playoffs, talking to scouts and coaches, I confirm that the installation of the Academy clearly has done a great deal to help streamline development of boys soccer in the United States.

Many teams – as much as the 100-degree kickoff temperatures would allow – attempted to play the possession-oriented style use a 4-3-3 formation (or some variant), and other style influences straight out of Claudio Reyna’s coaching curriculum.

Coaches weren’t married to a certain formation either, as there was a lot of in game tactical switches and formation changes, all while maintaining an effort to try and keep the ball and create chances, to varied levels of success.

Scanning the horizon, while there weren’t any super-flashy individuals that jumped out at me (although it’s hard to watch every single game), the standard of play has been raised thanks in part to the academy and the steps taken over the past few years.

…But there’s still so much to be done

At the same time, player development in the United States has barely scratched the surface. It’s only been five years – give or take – where our professional league and federation has taken any kind of organized, uniform action to try an develop players at the national level.

Youth clubs across the country have been working for far longer than that, of course, and Bradenton was set up near the turn of the century, but the recent action of the Federation allows for at least some semblance of uniformity to be followed across the country.

And that’s the critical point here, as the steps taken at the U16 and U18 age groups are only just starting to produce results of a higher level of player. However, it’s clear that there is a lot of work left ahead at this age group, and almost impossible to know if this is the most efficient and effective way to develop players in our country.

As long as U.S. Soccer leaders doesn’t ever rest on their laurels and assume the job is done – which so far they aren’t – development will continue to evolve and change at the Academy level and below in an attempt to ultimately improve the level of soccer and eventually the U.S. men’s national team.

Out of the sixteen teams to advance to Finals Week from the Academy Playoffs, seven were MLS Academy teams. That’s a good sign, even though results aren’t necessarily the be-all, end-all at this stage

And while it was slightly disappointing to see talented teams like the LA Galaxy U18s unable to progress, a few MLS Academies were lumped into the same group at the event, making it impossible for more than one to advance.

But in order for player development to truly move forward at the pace needed, it must be the professional teams here in the United States, specifically MLS, that really pushes things along and raises the bar.

Everywhere else in the world, it’s the club teams and not the federation that scouts, trains, and develops players in attempt to have them ready for first team action, and then down the road eventually making their respective national teams.

It’s always been different in America, given the stature of soccer and size concerns, but at the end of the day it makes sense for MLS clubs, as money invested in an Academy can create players, not to mention nice compensation if the player is ever transferred abroad. Said player would also, in theory, want to play for the shirt he’s worn since he was 12 years old, giving him an identity that goes beyond himself.

Most MLS teams (if not all) provide the luxury of a free Academy experience for the best players in their respective area. And as a result, those teams should have the best coaches, players and training environment that produces the best players in each respective area. And while in a lot of cases that is reality, sometimes it still isn’t, as evidenced by the results at the Playoffs.

…And they have their work cut out for them

MLS teams have signed a total of 55 players to Home Grown deals since the rule’s inception back in 2007.

And signing players is a huge thing, providing a professional training environment and chance for young talent to be nurture and progress in the right fashion. The fact that it didn’t exist for the league’s first 12 years is fascinating when compared with the rest of the world – although that initial decade was all about the league surviving and building.

But simply snapping players up to professional contracts is the first step in a long journey towards becoming a pro. And of the 55 players who have signed with the league, nine have already been cut, only 15 have seen any kind of minutes in league play this year, and just a small fraction play significant roles at their club.

A small handful of Home Grown players have been loaned out to teams in lower divisions this year, a good step. But until MLS works out a better environment to create meaningful games, whether through an improved reserve league or working closely together with the lower leagues of other divisions, questions are always going to linger about how effective turning pro between the ages of 16 and 18 is – although it eventually should be a no-brainer for the best of the best.

This is exemplified by the presence of Home Grown signings like Jack McBean, Jose Villareal, Zach Pfeffer, and a few others playing for their respective club teams at the Academy Playoffs. Clearly, training full-time as a professional is better than entering the college ranks, but until more games are available, it’s hard to know what works best.

Check back Tuesday for Part Two.