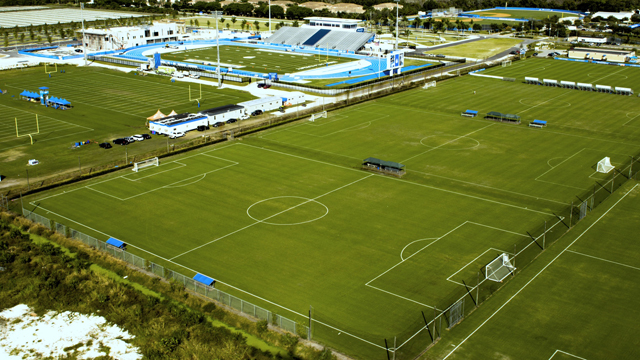 The final TDS Combine of 2014 was held at the prestigious IMG Academy in Bradenton, Florida in late December. The lasting note of the year was a quality one with a number of players trying to catch the eye of one of the college coaches in attendance at the event.

Here is the best XI from the event for the girls, which was selected by the college coaches as well as the TDS Staff.

GK Charli Pogany, IMG Soccer Academy, 2017: Pogany has all the tools needed to be a quality keeper. She athletically brings a presence to the goal, communicates well, is comfortable with the ball at her feet and is brave in the air and 1v1s on the ground.

D  Sarah Liggins, Braden River Soccer Club, 2017: Liggins showed maturity at the back, communicating well and kept the back lines shape. She is powerful in the air and technically sound.

D  Jeanel-Angelle Leon, Sunrise SC, 2018: Leon is a strong tackling defender and a great competitor. She is comfortable in possession and influenced the game going forward. Her biggest attribute is her leadership; she was constantly talking with the backline and encouraging players around her.

D  Ella Concannon, IMG Soccer Academy , 2018: Concannon is a player with a very bright future. A stud athlete, comfortable in possession out of the back, she reads the game well, communicates and keeps things simple.

MF Amy Hoagland, Wellington Wave, 2017: Hoagland is a deep sitting midfielder with a fantastic first touch. She plays simple and doesn’t over complicate the game, and had a great pass completion ratio at the combine. When she got into the final third, she was extremely creative.

MF Julianna Abrams, Gulf Coast Texans, 2017: Abrams is a technically and athletically gifted player. She is a creative midfielder who is smart in and out of possession. She is exciting to watch on the dribble and her first touch into space to create time and space is exquisite.

MF Nicole Cook, IMG Soccer Academy, 2018: Cook demonstrated great leadership in the midfield, constantly talking and directing. She won the majority of balls in the air, and showed great imagination and creativity in attack. She rarely gave up possession.

F Gianna Merigliano, Wellington Wave, 2017: Merigliano is technically solid forward with good speed. She has the natural ability to put herself in dangerous and effective areas of the field.

F Hannah Abrams, Gulf Coast Texans, 2015: Abrams is a natural finisher who does well dropping deep to pick up possession to run at defenders with speed and get shots off. She is constantly moving off the ball, high pressuring when not in possession and finding space for through balls when her mids/defenders are in possession.

F Ashton Royal, Jupiter United, 2017: Royal has good attacking instincts and sniffs out chances in and around the box. She likes to drift out wide and put in a number of good crosses on the day creating some very good chances.