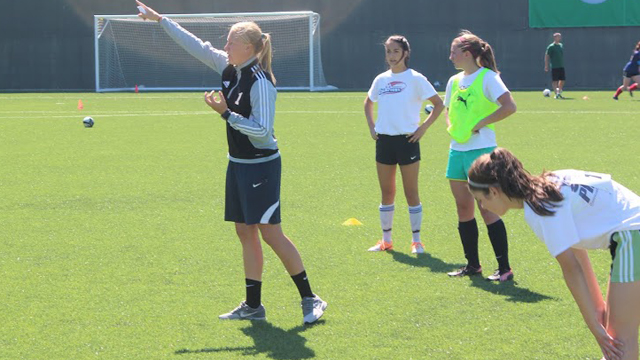 On July 6th the TDS combine series made its way to the Starfire Soccer Complex in Seattle, Washington. Coaches from top Division I, Division II, and NAIA soccer programs came out to see players from top clubs across the US and even Europe.

After evaluating the players, TDS agreed upon the Seattle Girls Best XI presented by National Guard.

Interested in getting on a Best XI list for a TopDrawerSoccer Combine? Check out how you can get seen at any of our three remaining Combines in 2014 here.

Sara Jean Edwards – Goalkeeper – Crossfire United – 2017 – Edwards’ calmness with the ball at her feet and strong communication skills from the back allowed her to truly stand out as one of the best at the combine. She’s got incredible physical attributes that will help take her to the next level.

Anne Marie Boeckmann – Defender – Classics Elite – 2017 – Boeckman has impressive tactical understanding of the game allowing her to make consistently smart decisions and showcase herself. With the ball at her feet on a dribble from the back, she is a hard one to stop. Her distribution skills create some dangerous opportunities making her quite a fun player to watch. A versatile player as well, one D1 coach stating she can “definitely see her as an attacking mid.”

Hannah Taie – Defender – FC Salmon Creek – 2017 – Taie is a player you want to have in your backline. She has great vision going forward and finding the target’s feet. Her decision-making is top notch and she positions her body well when defending, allowing her to not get into any unnecessary foot races. Hardworking player with a bright future ahead of her.

Jordan Lemieux – Defender – NW Nationals – 2016 – Lemieux is a player who combines well with her teammates utilizing her technical abilities to get out of pressure safely. She loves to get forward and create chances, and uses her pace well on recovery runs. Lemieux has all the physical attributes allowing her to be a top recruit for her class.

Kaysie Bruce – Midfield – Washington Premier FC – 2017 – Bruce was one of the most consistent players on the pitch. She got her head up and knocked some good balls into the forwards’ feet. She makes some sneaky runs to create goal-scoring opportunities, especially when she gets going with the ball underneath her.

Marissa Mendez – Midfield – LA Premier FC – 2017 – Mendez has become somewhat of a TDS combine veteran, having made the Best 11 at 2013’s LA combine she did not disappoint in Seattle. A deeper holding center mid, with fantastic technical ability she reads the game well and picks up the pieces. Confident on the ball, she keeps the flow of the game moving and has the ability to pick out a long ball.

Sofia Olofsson – Midfield - Malmo – 2015 – Olofsson has killer speed and great technical ability. Her vision while playing allows her to create dangerous plays in the attack and truly helped her be an impact player at the combine. All the way from Sweden, she could be one to watch in the future.

Monica Coelho – Midfield/Forward – Carolina Elite Soccer Academy – 2015 – Coelho is an extremely smart player. Her decision-making skills helped her execute well under pressure and she quickly became a trusted player by those around her. Solid passer and effective with the ball at her feet, she really showed her ability to play with the girls her age and most importantly at the college level.

Grace Eversaul – Midfield/Forward – FC Salmon Creek – 2017 – Eversaul was one of the hardest workers on the field today, giving it her all until the very last minute of play. She is quite gifted with her speed and quickness allowing her to be a dangerous target player. Very mobile and hard to stop, Eversaul will have no problem tearing apart some college level backlines.

Alexandra Rooney – Forward – Atletico Santa Rosa – 2016 – Rooney, another veteran of the TDS Combines series is making a second appearance in the Best 11 for 2014. Again she showed her passion, pride, heart and desire when she got in that box. Eager to put some goals away, Rooney certainly helped her team win some games and showed her ability to make it at the next level.

Jenna Killman – Forward – Washington Premier FC – 2017 – Killman is one of those players that defenders hate to mark. When she gets faced up with the ball at her feet, she’s gone. Her technical abilities are up to par along with the fact that she has one of the best work ethics. Killman is one of a kind, very coachable and a true team player.