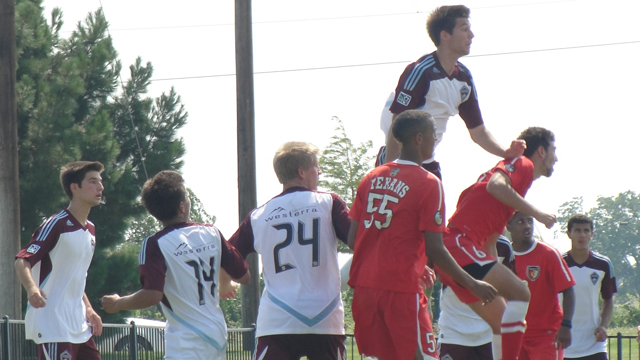 FRISCO, Texas – It was all on the line on Thursday.

After two days of play, the U18 age group reached its finale on Thursday morning at the FC Dallas Park with eight teams looking to secure a ticket to Houston, Texas for the USSF’s Development Academy Finals Week.

Before Dillon Serna’s last second game-winner for the Colorado Rapids, there was a lot of nervous moments for the MLS Academy in the finale from Group 4.

When action kicked off at 9:00 am (CT), Rapids looked to be in a good spot to advance – top of the table based on goal differential.

Over the next 120 minutes, the Rapids seemed more likely to be playing their last game of the season than winning the group and moving onto Houston in July.

With Empire United crushing South Carolina Battery in the other game from the group (the final score was 6-1), the New York club put pressure on both Texans and Rapids to play for the win. 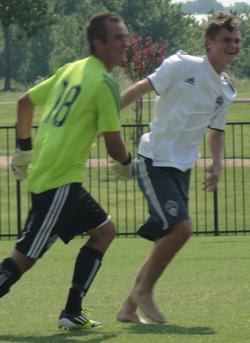 The game started well for the Texans, as the local team enjoyed the lion’s share of chances in the first half. Outside back Jack Blanton provided one of the best chances with a driven cross to the far post in the opening half, but Jonathan Kotowski’s sliding attempt missed just wide.

In the dying seconds of the half, Texans grabbed the deserved lead thanks to a penalty kick goal from Andre Reyes. A Texans attacker was brought down in the box by a clumsy challenge, and the Old Dominion-bound midfielder made no mess about the spot kick for the opening tally.

The second half belonged to the Rapids though. With a renewed life to the team after the break, the Colorado squad came out swinging with its postseason future on life support.

“Once again, we had to get to half time before we really were able to get on the same page,” Rapids head coach Brian Crookham told TopDrawerSoccer.com. “Unfortunately, that has been a theme of the week.“

Left winger Dillon Serna had the first chance in the 59th minute with a swerving effort from distance, but Texans goalkeeper Ashkan Khosravi made a nice diving save at the near post.

Five minutes later, Rapids found the back of the net for the game-tying goal. Striker Austin Seifert, who battled all day against the Texans’ physical center backs, beat Khosravi to a cross and tapped the ball into the empty net.

The joy from the tying goal quickly dissipated though, as the Rapids U16 team yelled out the score of the Empire United game (4-1, at the time).

“When one of our players was injured, our goalkeeper told us that we needed the win,” Serna told TopDrawerSoccer.com about knowing the group standings during the game. “After that, we had to push – I knew it was coming. We had so many chances.”

Most of the chances came in the final five minutes plus stoppage time, which was lengthy due to the water break and injuries.

Winger Ricardo Perez had a great look in the second minute of stoppage time when he was open in front of net but scoffed his shot wide.

Serna bailed Perez out though.

The U.S. U18 Men’s National Team midfielder (who is soon to be part of the U.S. U20 MNT for Milk Cup) netted the game winner in the final seconds of the clash.

“It was kind of a counter-attack, we got it out wide and there were only two defenders in the back,” Serna told TopDrawerSoccer.com. “[The defender] cut off the pass across, so I showed at the penalty spot. He found me and it was 1v1 with the goalkeeper. I kept my composure and finished.”

The goal clinched the Rapids’ spot in the Finals Week – a first for the MLS Academy from the Centennial State.

“It felt great,” the Akron-bound talisman said with a flashing smile.

It was more than Serna for the Rapids though. It was a collective effort that saw the team through to a spot among the last eight teams.

The Rapids ended Thursday’s game with only two field players available on the bench due to a string of injuries over the three games including one to recent Home Grown signing Shane O’Neill, who returned to Denver early for further evaluation.

“When you are down to two field player subs, it is difficult,” Crookham added. “The character of the group, the passion for trying to compete, and their concentration – you can get distracted by those other results and worry about everything else – made them come together and they got it done.”

Over the first 12 minutes of the game, New York Red Bulls had four good goal scoring opportunities. They only managed to convert on one of them, and the lackluster finishing hurt the New York club severely when the final whistle blew 78 minutes later.

Entering the final game from Group 6, Chivas USA led the group with six points, NYRB trailed by two points, while Charlotte Soccer Academy and New England Revolution were mathematically out of the picture.

The objective was clear for both teams: Chivas USA needed at least a point, and New York needed a win.

Chivas USA accomplished its objective thanks to a gutsy performance across the board. New York fell short due to the lackluster finishing and some bad breaks late.

The early action belonged to the Red Bulls. Scott Thomsen had the first quality look in the third minute with a header to the near post, but Chivas USA goalkeeper Jake McGuire snagged it.

A minute later, Brandon Allen cut past one defender and rifled his shot to the far post but it missed wide. Moments later, Thomsen and Allen linked up at the top of the box for another Allen effort, but again it went wide of the far post.

Finally, New York cracked the Chivas USA defense in the 12th minute via a splendid pass from Erik Sa to Daniel Bedoya.

Bedoya skated down the right side and drove a low cross into the middle of the box. The ball slipped out to Ethan Decker who had an easy tap in for the first goal of the game.

New York continued to turn on the pressure on the Chivas USA defense, but could not find another goal. As the time began to tick away, Chivas USA grew more comfortable and settled into its possession-oriented style.

The Goats did not get their break until the second half though, when Ben Spencer fought off a defender and rifled a shot into the lower corner for the tying-goal.

“I received the ball from our left winger, I felt the center back on my back so I took a touch to turn inside and then let one rip from outside the box,” Spencer told TopDrawerSoccer.com. “I saw the far post open so I kind of curled it in.”

The ball nestled into the net, but the game was far from over. Chivas USA stuck with its style of play and kept an open flow to the game, which helped the Southern California club hold the advantage in possession but did leave it open for a couple of chances.

Allen had the best look with a screaming effort from distance but it clanged off the post. The rebound fell nicely to Kerlins Georges, but the Haitian was in an offside position so his strike was wiped off the board.

New York had a couple of other looks, but McGuire and his defense led by Stephen Copley and Alex Heilmann held on for the draw.

The Red Bulls Academy players fell to the ground after the final whistle, but really had nothing to hang their heads about.

Many of the Red Bull players were part of the team that made Finals Week last year and were hoping to make a return trip to improve on the sixth place finish.

Instead, Chivas USA will be making the trip to Houston in July, as the Goats Academy clinched its first trip to Finals Week.