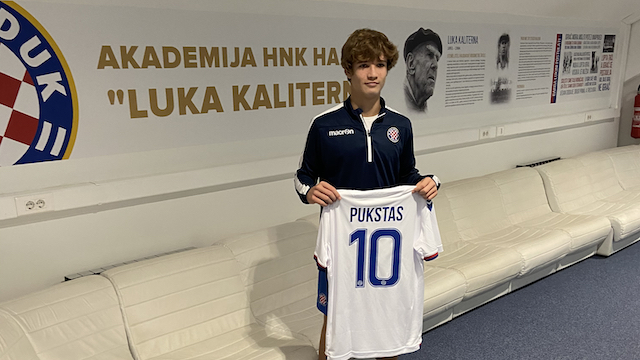 U.S. Youth National Team standout Rokas Pukstas made a big move last week when he signed a professional contract with Croatian club HNK Hajduk Split. Pukstas talked to TopDrawerSoccer about joining the club, his first few months in Croatia, and what is next for the U.S. U17 Men’s National Team in an interview shortly after signing with the club.

TDS: What have your first few months in Croatia been like? Both on the field and off the field?

Rokas Pukstas: It’s been going really well recently, but at the start it was definitely a struggle. When I was there the first two weeks, I picked up a slight back injury and that put me back a little. I, also, had to wait about a month for my papers to come in that cleared me to play, so mentally it was tough for me at the beginning, but it definitely taught me to be patient and be prepared for the opportunities I get.

RP: Our style play revolves around a lot of movement to create space for a scoring chance. Our full back, 8 or 10, and winger interchange to create space for one another so there is really no set position for us during the game. One other key thing in our team is counter-pressing, we bait the other team to play in the midfield to win the ball further up the field. In the beginning of the preseason, the coach would play me as an inverted left back because I’m really good with both feet and I could come in the midfield and receive the ball with an extra man in the midfield. Since my first game until now (five games), I’ve played the double pivot but I get more of a free role, so I can press and also help defensively.

TDS: Was it tough adjusting to life in Croatia? What is your living situation like (i.e. club provided apartment?)? Are you living on your own?

RP: It was definitely tough in the beginning because everyone speaks a different language, but it got a lot easier as I started making friends and learning a few words. I’m living in the Stadium with two other roommates and it’s really nice because the food, rooms, and fields are so close.

TDS:Signing your first professional contract only a few months after getting there is a big accomplishment. Do you have any other goals for this season that you are hoping to accomplish?

RP: I was extremely happy about signing the contract, but I looked past it because I’m still currently with the academy, so until I get minutes with the first or second team then that’s when I can pat myself on the back. I’m five games into the season with the U17s and I’m pretty happy with my performances, so obviously the next step is to make an impact with the 19s and prove my quality even more with players bigger then me.

TDS:What do the academy coaches tell you to improve on in order to get to the first team?

RP: One of the things I need to improve on is my finishing and my composure in the box. My coach seems invested to make me the best player I can be so I can work on that with the personal coaches that the club provides for specific parts of your game. If my finishing is quality, then I can be a more complete player and help the team out in different ways.

TDS:How did the opportunity to join Hajduk Split come up? Were there other clubs you trained/trialed with before you signed?

RP: I realized my goal was to play in Europe when I turn 16 when I went to Manchester United, in the summer of 2019. I saw the difference of coaching and the quality of players and I realized that I need to be there if I ever want to be a world-class player. I left Sporting KC to Barca Academy in February to have more opportunities to train with clubs in Europe, but obviously because of COVID I didn’t get any opportunities until August. My agent, Henry Codron, helped me find opportunities abroad.

TDS: Do you keep in contact with the other U.S. Youth National Team players in Europe? Is there a group chat or anything where you guys stay in touch?

RP: There’s been a lot of players that have been going to Europe recently and so it is always nice to check up on how they are doing because you never know if they will be your teammate now in the Youth National Team or in the future.

TDS: Any upcoming plans for the U17 US Youth National Team to get together?

RP: We sometimes have virtual meetings together, but there isn’t specific dates where and when we will have camps. Obviously the national team camps will be coming up sometime in 2021, so I am doing everything I can to be prepared to perform in those because my eyes are set on the U17 World Cup qualifiers and the U17 World Cup at the end of the year.