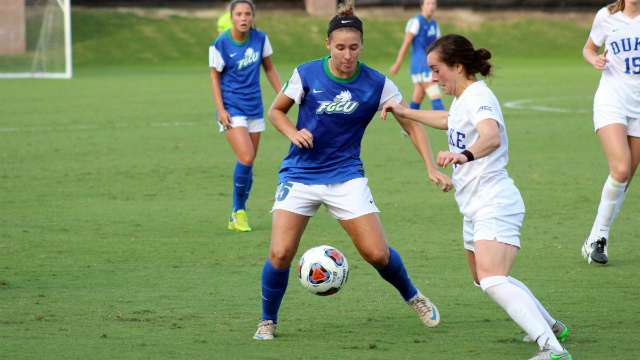 Few conferences were as competitive last year as the America East was, with five teams finishing with four wins in the conference and a clear logjam at the top of the final standings. Three other teams finished with three wins in conference, and it’s clear that a similar battle could ensue this fall.

Defending conference tournament champions Albany are well positioned, with contributors like Alexa Schneider, Kiana Rugar, Vivian Vega and Caroline Kopp bringing back experience. The Great Danes open the season with five straight games on the road (one of the those as an exhibition), including stops at St. John’s and Syracuse.

Brining an influx of foreign talent to the America East is Maine. Twelve returning players will look to blend with 12 newcomers added for the 2016 campaign. America East Rookie of the Year Vivien Beil is going to feature significantly for a Maine team that plays just five of its 15 games on home turf.

Despite conceding more goals than they scored, Vermont bounced back and into the conference tournament, showing the determination to get results at the end of the season. Nikki McFarland, Sarah Martin and Casey Garinklel are among the important returners.

Facing big holes to fill from last year’s team, New Hampshire welcomed a strong nine-player freshman class that will need to step up quickly in order to keep the Wildcats competitive. There are some veteran holdovers, including Am. East Striker of the Year Brooke Murphy, Lilly Radack, Jackie Feraco and Mimi Borkan. The graduation of Caroline Murray leaves the team with offensive production to replace.

Any of the three-win teams from last year could surged towards the upper echelon. UMBC had to retool after losing significant talent that buoyed memorable seasons before 2015, while Stony Brook and Massachusetts-Lowell. Keep an eye on senior forward Raven Edwards, as she’ll be a central figure in the Stony Brook attack.

In recent seasons, either Dayton or La Salle have ruled the roost in the Atlantic 10. George Washington bucked that trend a year ago, getting timely goals and a stout defense to run the table in the conference. The Colonials came up short in the conference tournament, however, as Duquesne stunned the field with a strong outing to lock up a spot in the NCAA Tournament.

The race for a top eight finish and a spot in the Atlantic 10 tournament – to be hosted by Rhode Island – is set to dominate the season once again. GW could lead that charge again, with 20 players from the first-place finish returning, including the A10 Rookie of the Year Sofia Pavon. Replacing conference Defender of the Year Brooke Stoller is going to be key.

Two massive attacking pieces graduated from Dayton, as Ashley Campbell and Nicole Waters moved on after sensational college careers. That’s significant offensive production to replace, as the two combined for 23 goals and 26 assists. That could lead to the Flyers slipping down the A10 standings, depending on how the coaching staff retools its roster. Alexis Kiehl could be one of the players called upon, as she played very well during the spring and finished second on the team in goals last season with eight tallies.

With key performer Emily Gingrich leading a talented group, the experience of last season’s success should have Saint Joseph’s(w) hungry for more accolades in the upcoming campaign. Gingrich formed a nice offensive tandem with Dakota Mills, scoring 21 goals between the two of them. With the former set for her senior season, the Hawks could be on the prowl for bigger things.

A relatively young VCU side brings back its leading scorer in sophomore forward Julia Suarez, though it’ll be down to some intriguing new additions to tilt the different in favor of the Rams. They include English youth national team veteran Rachel Hardy from Chelsea Ladies, and Dutch midfielder Ingrid Brouwer. A title challenge could hinge on tightening things up at the back as the A10 race is shaping up to be a doozy.

Replacing the production of Jessica Widmann (12 g, 5 a) and Kristina Maksuti (7 g, 3 a) is one of the keys for Fordham’s hopes of injection itself into the title conversation. Key holdovers from last year that need to take a step forward are Natalie Sims, Nicole Bates and Rachel Collage.

Seeking a return to a seventh straight A10 conference tournament, La Salle suffered a slight drop off last season though managed to secure a spot in the postseason. Senior Deja Davis, junior Laris Zambelli and Norwegian forward Kristin Haugstad are key to the Explorers’ aspirations.

The Atlantic 10’s parity is summed up by Duquesne’s 2015 run to the NCAA Tournament. After finishing at .500 in league play, the team strung together a run to the A10 conference tournament championship, and a spot in the tourney. Katie O’Connor’s strong freshman campaign contributed significantly to that success, and she’ll have a big part to play once again.

Seniors Sarah Hardison and Alex Myers led George Mason in scoring last season and will be leaders on the Patriots again. It’s an experienced group under second-year head coach Todd Bramble, and one that can certainly expect to be competitive and in the title mix.

For the remaining six teams, Massachusetts, Richmond, Rhode Island, Davidson, St. Bonaventure and Saint Louis, the main focus is a top eight finish to secure an A10 tournament spot. And as Duquesne showed last season, after that, anything can happen.

For the past six seasons, Florida Gulf Coast(w) has dominated proceedings in the Atlantic Sun. Now, the Eagles are lining up what would be a seventh straight conference regular season title. Last fall, FGCU doubled down on a sterling regular season, winning its first round NCAA Tournament game and providing a stiff test to any level of competitive. Tabby Tindell is one of the nation’s most underrated strikers, and will state her case for being an elite player as a senior. FGCU is far from a one-player team, as Camille Knudstrip, Paulina Speckmaier, Ashley Parks, Ali Rogers and Nikki Hudson provide a talented supporting cast.

The search for a contender to upset the Eagles starts with Lipscomb. Anchored in goal by Anna Buhigas, the two-time ASUN Goalkeeper of the Year provides the requisite defensive cover that could potentially keep the title race close. Forward Maycie McKay scored seven times as a freshman and if she can increase her output, the chance of a shock upset grows.

Jacksonville has the makings of a strong spine, between rising sophomore defender Lauren Short and midfielder Joelle d'Entremont. A large class of 11 freshmen will certainly get the opportunity to come in and contribute right away.

Sarah Collins is Stetson’s goal-scoring ace, and once again will be the focal point of her team’s attack. The Hatters have a roster deep enough to spring a surprise or two in conference play, especially if Collins can take a step forward and continue to provide enough offense.

New head coach Benji Watson has a healthy blend of returning players and newcomers as he surveys his first season in charge at Kennesaw State. Fourteen players are back from last season along with 11 freshmen. That includes seven seniors, many who will need to step up and contribute, including Cassidy Kemp and Abby Reed.