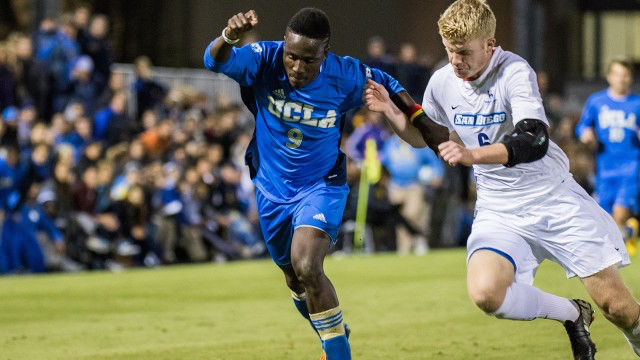 The results of the annual TopDrawerSoccer College Coaches’ Survey are in. In the third edition of the yearly questionnaire for Division I men’s soccer coaches, there was less consensus than ever before.

The coaches across Division I were undecided on most of the topics as many players earned votes in the separate categories. This year, two additional questions were added to survey, which revealed the title favorite and the breakout candidates for the 2016 season.

Special thanks to all of the college coaches who participated to the anonymous questionnaire.

UCLA forward Abu Danladi was selected as the best player in Division I for the 2016 season by the college coaches. Danladi scored six goals and had 10 assists in 2015 for the Bruins. The former Gatorade Boys Soccer Player of the Year will be a junior this fall.

Teammate Jackson Yueill was second in votes among the college coaches for the best player honor. Yueill earned admiration from fellow coaches after his stellar freshman season in 2015. Yueill was scored seven goals and had six assists as a freshman with the Bruins.

Georgetown sophomore James Marcinkowski was selected as the Best Goalkeeper in college soccer in the survey after earning the majority of the votes. Marcinkowski finished his debut season in college with a 0.69 goals against average in 21 starts for the Hoyas. Duke transfer Robert Moewes was second in votes, as the former Binghamton star is headed to the ACC this fall and has lofty expectations for his time with the Blue Devils. Jake McGuire (Tulsa), Alec Ferrell (Wake Forest), Nico Campbell (Valparaiso), Eric Klenofsky (Monmouth), Nils Leifhelm (Rhode Island), and Billy Heavner (UMBC) all earned votes as well for the best goalkeeper honor.

Indiana junior Grant Lillard was selected the favorite to be the Best Defender in college soccer in the survey after earning the majority of the votes. Lillard has started 43 games during his two seasons with the Hoosiers. The center back has nine goals and six assists to his credit during that span. Saint Francis (PA)(m) senior Francis de Vries was second in the votes for the best defender. De Vries was the Northeast Conference Defender of the Year in 2015. Michael Amick (UCLA), Jakob Nerwinski (Connecticut), Brandon Aubrey (Notre Dame), Lalas Abubaker (Dayton), Liam Callahan (Syracuse), Thomas Hilliard-Arce (Stanford), Tim Kubel (Louisville), and Nick Lima (California) all earned votes for the best defender.

UCLA sophomore Jackson Yueill was select the favorite to be the Best Midfielder in college soccer for the 2016 season in the survey after earning the majority of the votes. Yueill’s teammate Jose Hernandez was second in the votes, as the two look to make for a troubling duo for opposing defenses this fall. Wake Forest midfielder Ian Harkes was a close third in the voting. Drew Murphy (North Carolina), Brandt Bronico (Charlotte), Louis Bennett II (Marquette), Mauro Cichero (SMU), Sergio Rivas (Seattle), Adam Najem (Akron), and Tanner Thompson (Indiana) all earned votes as well for best midfielder.

Incoming Zip Emmanuel Sabbi was selected as the favorite to be the Best Freshman in college soccer for the 2016 season by the coaches. Sabbi, a member of the U.S. U20 Men’s National Team, is slated to join Akron for the fall with some lofty expectations on his shoulders. Isaiah Young (Wake Forest) and Weston McKennie (Virginia) finished in a tie for second for the honor. David Norris (Virginia), Ifunanyachi Achara (Georgetown), Nils Bruning (North Carolina), Cameron Lindley (North Carolina), Nikkye De Point (Villanova), Tre Pulliam (UMBC), Chairat Puengrod (Loyola Marymount), Elijah Rice (Washington), Handwalla and Bwana (Washington) all earned votes as well for the honor.

There was no clear favorite for the Breakout Team of the 2016 season. Wisconsin, UCF, Pittsburgh, Villanova, Virginia, Loyola Marymount, North Carolina, Indiana, and Loyola (MD) all earned votes.

UCLA was selected as the title favorite for the 2016 college season by the coaches. The Bruins narrowly edged out North Carolina and Maryland for the honor, as both finished only a vote behind the Pac-12 squad. Akron, Wake Forest and Stanford also earned votes as favorites for the title.