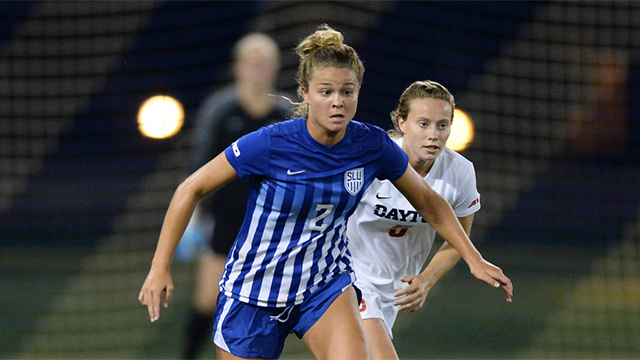 What happened in 2018: Stony Brook and Hartford shared the spoils during the regular season, finishing the conference regular season slate with equal 6-1-1 records. However, come conference tournament time, neither would punch their ticket to the Big Dance. Albany spun together a run in the Am East tourney, beating New Hampshire, Hartford and Massachusetts-Lowell to advance. With the win, Albany has now won three of the past four conference tournaments.

What to expect in 2019: One of several conferences where little separates teams at the top, the preseason coaches’ poll reflects that. Albany enters the season as favorites, but Hartford, Stony Brook and New Hampshire all received first-place votes. If Binghamton can find a way to replace Kayla Saager’s production, they could be one of the dark horse teams.

What happened in 2018: South Florida dominated proceedings, winning eight of nine conference games to claim the regular-season championship in the AAC. They lost the conference tournament to Memphis, but did enough to join the Tigers in the NCAA tournament. USF defeated Albany in the first round of the tournament before bowing out to eventual champions Florida State. Memphis fell 3-0 against Wisconsin.

What to expect in 2019: Behind goal-scoring senior Evelyne Viens, midfielder Andrea Hauksdottir and a strong recruiting class, South Florida looks to be close to the top of the heap once again, with Memphis leading the chasing pack. The Tigers have to find a replacement for defensive leader Olivia Gauthier, but do bring back Serena Dolan and Clarissa Larisey. UCF can’t be counted out, although the program did lose German stars Stefanie Sanders and Dina Orschmann to pro contracts back home. East Carolina is trending in a positive direction of late, finishing tied for fourth with SMU last season. A step forward for both could see them enter the conversation for title honors.

What happened in 2018: It was a dream season for Saint Louis, which went a perfect 10-0-0 (18-4-0 overall) in Atlantic 10 play. The Billikens backed it up in the conference tournament, advancing to the NCAA tournament with the automatic bid, before bowing out in overtime against Kansas in the first round.

What to expect in 2019: Even though SLU finished as clear winners, it was by no means a runaway win. VCU, George Mason and Saint Joseph's kept the pressure on last season, and are among the contenders to do the same in the upcoming season. With 14 programs in the conference, the luck of the conference schedule can also dictate a team’s final record, but it wouldn’t be a surprise to see the likes of Massachusetts, Fordham, George Washington or perennial powers Dayton to jump into the mix. If La Salle can continue to retool and make a big jump, keep an eye on them as well.

What happened in 2018: Last fall saw Lipscomb secure the double. After topping the Atlantic Sun table with a 7-1 record in regular seasonplay, they backed it up in the conference tournament, securing the team’s automatic bid. There, they defeated Mississippi State by a 1-0 score in the first round, before bowing out to Duke in the second.

What to expect in 2019: Only three seniors were on the roster last year for Lipscomb, so at the start of a new campaign, they’ll be the favorites to repeat. Most impressively, they conceded just three goals on the year in A-Su play – although one of the seniors that did leave was starting goalkeeper Kate Mason. NJIT checked in at second place last fall, and can play their way into a competitive side once again if they can repeat things. Kennesaw State is a program that’s tasted success, while perennial conference power Florida Gulf Coast(w) looks to get back to the top of the summit. Keep an eye out for North Alabama, which enters their second season since jumping from Division II last summer and did well in their first go-round.

What happened in 2018: Baylor emerged as the regular season champions, posting an 8-1 record in Big 12 play. The Bears spun off eight straight league wins after losing the opening match. West Virginia had the last laugh in the conference tournament, beating the Bears 3-0 to win the crown. The pair of programs were joined in the NCAA tournament by Texas, Texas Tech, TCU and Kansas. With a quarterfinal finish, the Bears made it the furthest in the postseason.

What to expect in 2019: While the default expectation (and one that is shared by the preseason coaches’ polling) for West Virginia to capture the regular season, both Texas and Baylor seem like they could be in the running. The Longhorns in particular have a number of returning weapons, from Cyera Hintzen leading the line to the supporting work of Haley Berg. Canadian youth national team veterans Julia Grosso and Emma Regan provide a wealth of experience. The Bears lost key pieces from last year’s squad, including Julie James, who ran the show in midfield. Either Oklahoma or Oklahoma State have the kind of talent to put together a run as well.

What happened in 2018: Georgetown continued its recent dominance, winning a third-straight Big East crown with a 21-1-3 record. Along with securing a No. 1 seed in the tournament, the Hoyas made it all the way to the College Cup, falling against North Carolina in the national semifinal.

What to expect in 2019: Eyeing a fourth straight title, the Hoyas certainly have holes to fill: goalkeeper Arielle Schechtman graduated, as did Kyra Carusa and Caitlin Farrell. If they can find goals, the team should be difficult to break down as per usual. Should Georgetown slip enough, Butler could be poised to make a run, with Anja Savich and Annika Schmidt providing quality in the spine. Xavier can trust the quality of Samantha Dewey to win the midfield battle, and if the program can find other supporting players, it could go on a run.

What happened in 2018: After Weber State claimed the regular season crown with a 7-1-1 record, Montana got hot at the right time of the year to secure the at-large bid, winning the Big Sky conference tournament.

What to expect in 2019: Things can get wild and crazy in the Big Sky, with some of the best players in the conference exhausting their eligibility. In fact, only three of the players that earned First Team All Conference honors last year weren’t seniors. Northern Arizona and Idaho State have new coaches; while Weber State, Idaho, Northern Colorado, Montana and Eastern Washington will look to repeat as postseason contenders. Northern Colorado edged Weber State in the preseason coaches' poll, with the former bringing back eight starters from 2018.

What happened in 2018: Last season’s Radford side picked up both the regular season and tournament titles in the Big South, punching a ticket to the NCAA tournament. Gardner-Webb finished as runners-up in the tournament.

What to expect in 2019: There’s reason to believe that Radford lost enough from last year’s standout squad that someone from the chasing pack can haul them in. They lost four seniors that earned All-Conference honors last year, but enter as preseason favorites. However, Gardner-Webb, Longwood, Campbell and High Point could play their way towards the top of the standings should they stay healthy and enjoy strong seasons.

What happened in 2018: It was a clean sweep of regular and postseason play for Long Beach State. After holding off UC Santa Barbara to capture the regular season crown, Beach then beat UC Davis and the Gauchos in the conference tournament to make the NCAA tournament.

What to expect in 2019: Like most conferences, coping with the talent drain is going to dictate how the season plays out in the new season. Beach lost significant experience in various parts of the field, and will need a big season from rising senior Katie Pingel. The same can be said about UCSB, with four seniors on the way out. UC Irvine, UC Davis, Hawaii and UC Riverside were in the mix last season and could certainly pull off a good run once again.