Philadelphia, PA – In a cold downpour, Drexel beat Monmouth 2-0 last Friday.  Drexel played well, Monmouth didn’t.  It wasn’t just the score, but the amount of possession and the attack danger.

The inclement weather even discouraged Drexel’s Tal Bublil’s older brother from dancing in the stands after each goal – which is always a highlight!

Note: There was no scoreboard/clock.

Monmouth: 4-4-2. Flattened diamond midfield. The AM was more defensive than attacking – especially in the beginning of the game.

Drexel: 4-1-2-1-2. It’s an interesting formation.  The back 5 are fairly standard, though the defensive midfielder gets forward more almost as a free safety to pin back the opponent or squelch transitions.  The forwards play unbalanced in that Malcolm LeBourne plays much wider (to the right) looking for the ball near the sideline whereas Andrew Goldberg stays more central.  Andrew Page could be categorized as a withdrawn forward, because he’s more attacking focused.  The two midfielders play more akin to 2-way midfielders.

In the first half, the forwards and midfielders were not connected.  If the ball got forward, the 2 forwards were on a virtual island – not related to the pouring rain and animals lining up 2 by 2.  This was fixed at halftime.  The other problem in the first half was that Monmouth was unable to hold possession, but again it was better in the second half.

There are 5 starters on this team that have had groin surgery in the off-season. 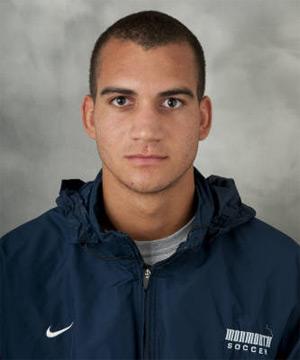 Anthony Vazquez
One of these players is defender Anthony Vazquez.  Though he was listed on the fall 2010 roster as a senior, Coach Rob McCourt confirmed that Vazquez has another year of eligibility.  Vazquez was dropping back in anticipation (perhaps as a precaution because of his groin surgery) which allowed Drexel attackers to get behind the defense, but Vazquez closed quickly to stop attacks.  He did exactly this against Andrew Goldberg in the first half.  Vazquez is not up to his fall 2010 fitness, but he’s still a rock. He was, however responsible for the first goal.

Joe Schmid is a transfer from Villanova who had played for a year there getting many starts. My note on him at halftime was that he has skill but has not acclimated to the speed of the college game.  Like other things, he was better in the second half.  Perhaps, this is more of a work-in-progress based upon continued learning of his teammates.

Schmid is very small player with good feet. He’s wearing #10, but he’s no Ryan Kinne – though no one else on Monmouth is either.

Cesar Blacido is of similar size and skill as Schmid, but plays quicker.

LB Christian Nogueira is a good defender with good speed and the passion for getting up the end line. I like his aggressiveness.

George Quintano is an outstanding dribbler, conservatively maintaining his small touches to prevent dispossession.  He’s confident with his ability to hold the ball.  However, more than halfway through the first half, he received the ball adequately, putting the ball in front of him with his back 40 yards from the Drexel goal. Ideally, he would have dragged the ball into the open space behind him while turning, allowing him to face the goal into the available space. This is my small complaint about Quintano’s play, recognizing the space, where to put the ball and then executing this successfully.

Goalkeeper Alex Blackburn didn’t properly handle the ball kicked back to him, surrendering the insurance goal.  In my mind, he has not cemented a claim to the starting goalkeeper position from departing senior Bryan Meredith.

RJ Allen seemed to be more affected than others with the damp, slick surface.  He didn’t seem to get his head in the game.  His play was sloppier than I’ve seen from him in the past.

Another player that I was surprised to see struggle was Max Hamilton.  In the first half, I was convinced that he had an injury that impacted his fitness.  After the game, Coach McCourt corrected me that he was not suffering from an injury.  Hamilton struggled, regardless.  Additionally, he was on another page than several of his teammates.  I tend to believe if everyone is on a different page than one player that perhaps the problem is with the one player.

Wes Ostrzycki is an intriguing player.  He’s another small player with good skill with dynamic movement.  I wrote that he doesn’t seem interested in contributing on the defensive side, but he made a good defensive play later in the second half.  Perhaps, I’ll modify my opinion in that he needs to provide consistent defensive intensity.

Nathan Page scored a goal in each half.  The first was on a legitimate penalty kick and the second was on a Monmouth mistake.

On the first goal, Monmouth’s Anthony Vazquez made a poor pass to fellow center back Kevin Davis, but Andrew Goldberg intercepted the pass, dribbled into the box and Vazquez fouled him. Penalty kick.  Page buried it.  No mystery here. 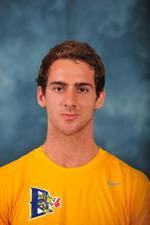 Nathan Page
On the second goal, a Monmouth player fired the ball back to his goalkeeper from 35 yards out, goalkeeper Alex Blackburn didn’t handle it well and cleared the ball to an open Page at the top of his box. Page chipped Blackburn.

Page does many of the small things that make Drexel successful.  He links with the forwards Goldberg and Malcolm LeBourne capably to form a cohesive attack.  Additionally, Page reads the play quickly.  In the first half, he stole the ball from Max Hamilton because he anticipated which way that Hamilton was going to turn and pass, stole the ball and transitioned the attack.  He understands the subtle parts of the game, for example, he’ll use the outside of his foot against the defensive grain to gain space in the attacking third.

Another player that understands how to play the game is Ken Tribbett.  He’s not abundantly quick/fast, but he reads the game so quickly that he continues to be in good defensive positions to pin back the opponent.  Tribibett will beat one defender on the dribble then lay the ball off to his forward advancing teammates.  The only concern that I have is does he have the closing speed for the next level – I don’t think so, but it’ll be fun watching him for the next few years.

The freshmen central defense duo of Tal Bublil and Matthew DiDomenico are a solid defensive combination.  Both are good tacklers and don’t make frequent (or glaring) silly mistakes in the back.  I like that both are willing to be treacherous to attackers that don’t see the contact coming. For example, Hamilton was coming forward in the first half and DiDomenico cycled over and cleaned his clock.

Ben Miller is a clever passer out of the back.  He served numerous passes up the line to his forward.  One of the best was a 40 yard pass in the second half that seemed to straddle the sideline finding LeBourne’s foot.  In the second half, Miller took a 35 yard shot that the Monmouth goalkeeper had to scramble to tip over the crossbar.

Goldberg is a satisfactory offensive contributor willing to lay-off the ball to a better positioned teammate, shoots with adequate power, but lacks another gear to create his own shot at the next level.  In the second half, he got behind the defense, but didn’t have that 5th gear to drive to goal.  He was substituted soon after.

While Goldberg is mature, his fellow forward sophomore Malcolm LeBourne is not. For example in the first half, LeBourne kicked the ball away after an infraction.  The referee told him to not to do that again.  Rather than accepting this mild admonishment, he argued, continued to argue further – and I was surprised to see that he wasn’t cautioned.

LeBourne is one of the Drexel players that have the athletic ability to play at the next level.  He needs to improve on his technical skill, produce and - to me the easiest thing – mature and he has a legitimate opportunity to play professionally.

Drexel has some interesting players coming off the bench.  Coach Doug Hess didn’t make a single substitution in the first half (which I like), but made a host of substitutions in the second.

One of the players that came off the bench is freshman Manuel Cazares.  He’s very technical, but when I saw him in the fall, I was amazed at his petulance. It’s remarkable that I would remember this – but the incident seared in my mind. In this game, he was composed, focused on helping his team, by holding possession and moving the ball quickly around the Monmouth defenders.  He has tremendous technical skill, but he’s an under-sized player.   He’s going to have impact on this Drexel team in the fall.

A new player that showed that he can play is Michele (pronounced meh-KEL-a – Michele) Patia. He attended Drexel in the fall and is a walk-on with the team this spring.  According to Coach Doug Hess, he just cleared the NCAA clearing house.  He’s another small player but combined well with Cazares and more importantly, decided not to play a ball to a covered Cazares even though Cazares was calling for the ball.  Passing is important, but knowing when not to pass can be more important. I could see him getting minutes in the fall.
Headlines
College Rankings HQ
View all rankings >>