Georgetown depth to get chances in the fall 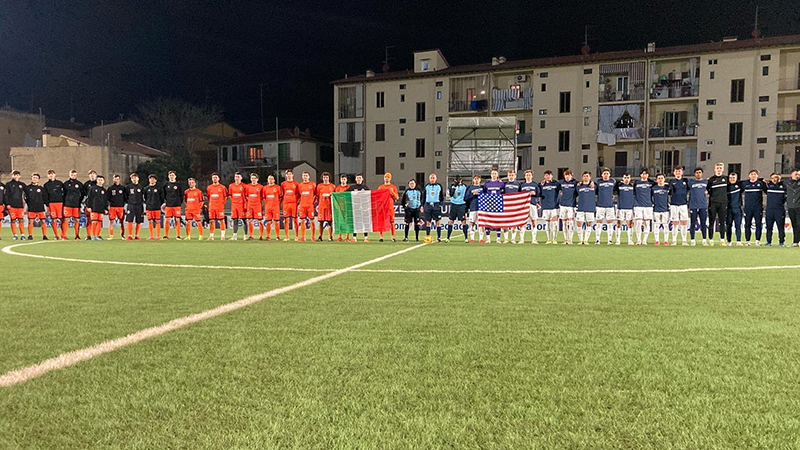 Georgetown Coach Brian Wiese didn’t have much time for self-pity. His Hoyas team had just lost in the College Cup semifinal, the nation’s best XI falling to a well-drilled Washington side.

After a narrow 2-1 defeat, Wiese could have taken a break, reset, sat on a beach for a week, let college soccer — briefly — drift from his mind.

Instead, his brain wandered straight into next year.

“It's the coach's curse,” Wiese said. “It doesn't matter when your season ends, your brain takes over immediately into ‘what does this mean?’ Who’s graduating and who is coming in?”

Wiese certainly had a lot to ponder. Georgetown was among the best teams in the nation, but in the three months following its College Cup defeat, the program saw eight players depart either to graduation or to pursue pro opportunities. With his team gutted, Wiese had to figure out how to piece together an inexperienced roster to be ready to take the pitch on August 1 the following year. For that, he’s looked at his existing pack, putting his faith in top recruits and promising starters alike to contend for another national championship.

“You have to understand that it's just going to be different,” Wiese said. “If you hold that the new incoming players to an unrealistic standard, you're gonna be really frustrated.”

The standard set by the departing players will be difficult to touch. Of the eight departures, five pursued professional opportunities at the season’s end. Gone was TopDrawerSoccer Player of the Year Dante Polvara — who signed for Aberdeen FC. All-Americans Sean Zawadski and William Sands followed him out of the door into MLS systems. Top scorer Stefan Stojanovic and All-Conference goalie Giannis Nikopolidis also signed pro contracts.

In their stead, Wiese swiftly went to work. The advent of the Covid-19 pandemic meant that only two members of his current roster had experienced a spring season before, benefiting from the extra coaching and additional matches that the early months of the year bring for a college team. In those sessions, Wiese saw potential. The drive of the group to prove that they could approach the college soccer summit was impressive, he said.

And the matches they played, including clashes with Wake Forest, UNC, Virginia Tech — all perennial top 25 teams — certainly gave an indicator of where his squad was.

“It was really fun to see them work and, and develop and grow and become older, just over the run of that semester,” Wiese said.

Still, Wiese has to figure out how his team might line up come fall. With a large chunk of his XI gone, there’s a question of tactics, formation, and playing style. His solution — so far at least — has been to fiddle with his new faces, and figure out how he can build a system around their attributes.

That’s meant embracing new styles, tweaking lineups, and coaching a group that spent a lot of the 2021 season watching from the sidelines. Wiese has also opted to stick with his existing squad. The transfer portal has been a source of temptation for programs across the country. With an influx of talent — of all ages — entering their names into the fold every day, the lure of an extra player, a plug and play option, is hard to ignore.

“We want to trust our recruiting that these guys are going to develop and become what we recruited them to become,” he said.

More concerned about cultural fits for his team, though, Wiese was reluctant to foray too much into the hundreds of names on a computer screen.

“It's not that I have a smaller roster — we have the exact same size roster we had last year,” Wiese said. “Guys have to prove themselves, but you have to trust your recruiting.”

In March 2020, Wiese’s team planned to embark on an expansive pre-season tour of Germany. The plan was to compete against some top youth academies and take in European soccer culture — as much a team bonding trip as a spring season tune-up.

But a week before their plan was due to take off, the trip was canceled due to pandemic travel restrictions.

Two years later, Wiese was finally able to get his squad on a plane, this time to Italy. He took his team to Milan, Rome, and Florence. They played against a top amateur side, and squared off against one of Atalanta’s youth sides.

They also sat in the San Siro as AC Milan edged Napoli. They watched Roma beat Atlanta in the Stadio Olimpico. They took in a Serie B match, and saw a top UEFA Conference League game, too.

And those experiences, those opportunities, are what Wiese values the most. The slight respite before the real work starts, and the new group faces the reality of trying to reach the highs of one of the nation’s best squads.

“These are the little experiences that you get every so often that can define the college experience,” Wiese said. “It’s something they'll never forget.”